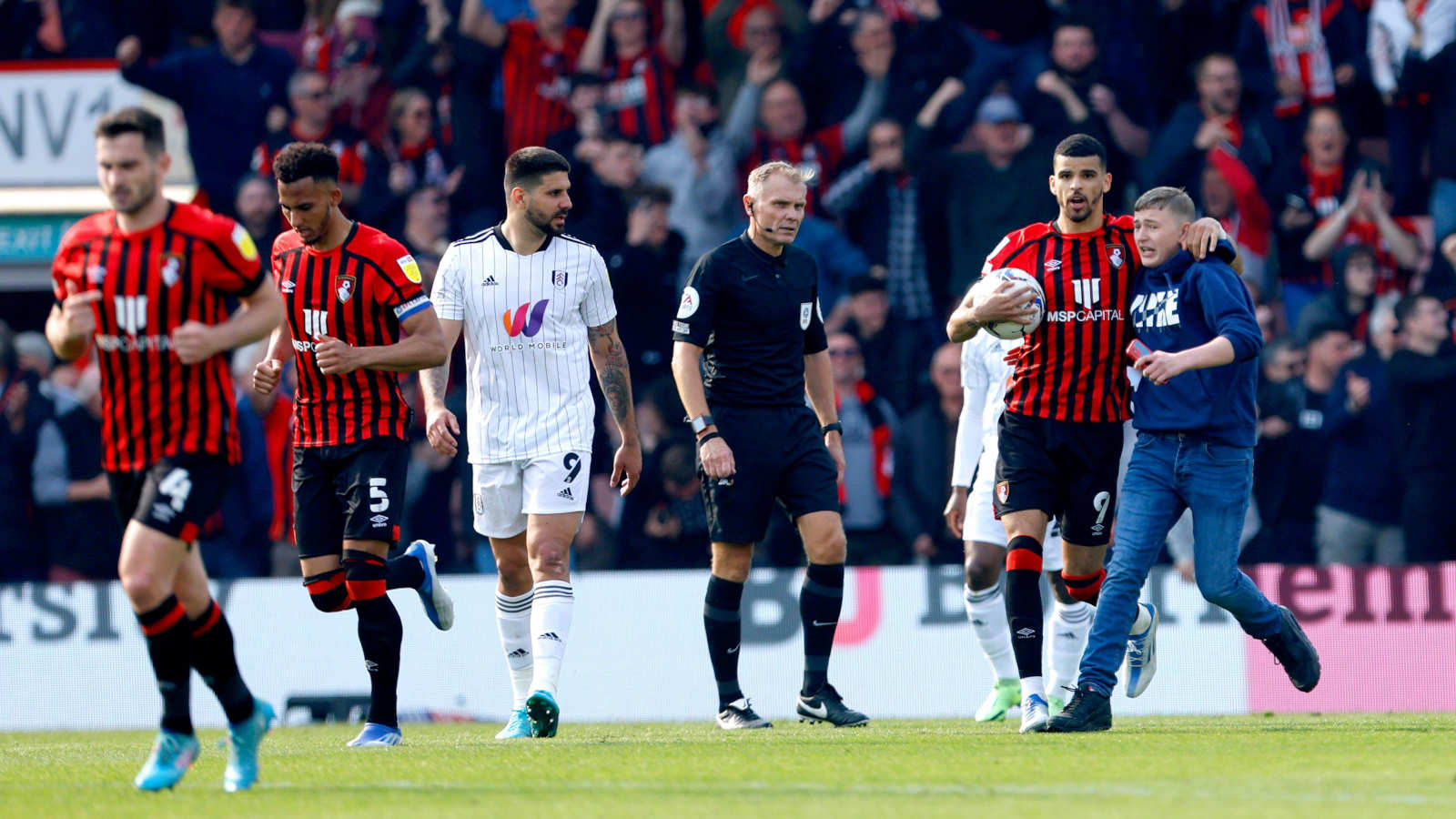 Bournemouth scored a late goal to rescue a draw against Fulham; with Huddersfield and Forest breathing down their necks, every point matters.

At this late stage of the season, the tiniest of margins can make a huge difference. The previous few games had been uncomfortable for Bournemouth. They’ve only spent a couple of weeks outside the Championship play-off places, but as a return to the Premier League after two seasons started to come into view, nerves set in. Prior to the arrival of Fulham at the Vitality Stadium they’d failed to win three of their previous four games, failing to score each time.

Fulham are already bound for the Premier League, although they arrived on Dorset off the back of some shaky results and in need of a win to sew up the Championship title, too. But when Aleksandar Mitrovic scored his 41st goal of the season in as many Championship appearances – a record which hasn’t received anything like the comment it should have done; a goal a game over a whole season is almost unheard of – Bournemouth had to labour to get themselves back into the match.

They were already fully aware of the continually shrinking gap to the teams below them. Nottingham Forest were winning at Peterborough United by a goal to nil, while Huddersfield Town had beaten Barnsley the night before. Both results kept them in contention for an unlikely automatic promotion place while relegating their opponents.

But just as Fulham were getting ready to start their title-winning party, the champagne had to be quietly put back on ice. Harry Wilson was penalised for a foul on Adam Smith and, with Fulham coach Marco Silva having earned himself a red over his angry protests to the officials, Dominic Solanke stepped up. Eight minutes into stoppage time, he rescued Bournemouth what might just turn out to be their most valuable point of the season.

Bournemouth haven’t been on some sort of alarming slump. Their 2-0 loss to Steve Bruce’s malfunctioning West Bromwich Albion a couple of weeks ago had been a surprisingly tepid performance. Goalless draws against Sheffield United and Middlesbrough were still halfway acceptable results when facing play-off hopefuls. But bit by bit, a completely commanding position has been chipped away at, to the point that their advantage over third-placed Huddersfield is now down to just two points. The Terriers do only have two games left, while Bournemouth and Forest, five points back, have four. And it still feels as though Bournemouth should have enough about them to get over the line, but there’s already one further twist in the tail: two of Forest’s remaining matches are against the top two.

There’s still a chance that Huddersfield or Forest could yet catch Bournemouth. The former can only look back ruefully on a four-day period during March when they were beaten in successive games by the Cherries and Millwall. Other than that, they’ve not been beaten in the Championship since the end of November. At that point, they were in 11th. Had they not spent so much of the first half of the season playing like a mid-table team, they may have been pushing Fulham for the league title by now.

Forest, meanwhile, have only dropped 12 points from the 15 league games they’ve played in 2022 so far. Their disastrous start to the season under Chris Hughton, rendered largely forgotten by replacement Steve Cooper, may be coming back to bite them. It certainly seems difficult to believe Forest took just one point from their first seven league matches and were bottom in the middle of September. They have impressed both in the league and the FA Cup, where they knocked out Arsenal, Leicester and Huddersfield before succumbing to Liverpool in the quarter-finals. It’s been one hell of a turnaround, regardless of what happens next.

Both of these clubs would fancy their chances in the play-offs, but the end of the normal league season can have a peculiar effect on the psychology of a team. A few weeks ago, supporters of either Huddersfield or Forest would likely have been happy enough to accept a place. At the end of February, for example, Bournemouth were two points ahead of Huddersfield but with four games in hand on them, while Forest were down in ninth. But when the possibility of automatic promotion starts to take hold, the disappointment of failing to achieve it can have a disastrous knock-on effect in the actual play-offs.

At the start of November, Bournemouth were 18 points ahead of Nottingham Forest.

Huddersfield, with just two games to play, have left it too late to catch Bournemouth. But Forest may still feel it is achievable, especially considering they still have play Bournemouth in one of their four remaining matches. They need to keep winning but have the momentum to do that. Neither club would want to miss out on automatic promotion by a hair’s breadth and then have to face the challenges of the play-offs.

Even Scott Parker seems a little on edge; he claimed after the match that Mitrovic’s goal might not have fully crossed the line, even though the Championship has Goal Line Technology. There have been rumours that the GLT may have been faulty, but these are completely unconfirmed and wouldn’t make any difference now anyway. And regardless of any of this, as the home club, presumably ensuring that this technology is working properly is to some extent Bournemouth’s responsibility.

So Solanke’s late, late equaliser was important. It extended Bournemouth’s lead over Huddersfield from one point to two, and the adrenaline rush of a late goal might be very beneficial to the psychology of the team at this vital stage. Forest are only one goal worse off than Bournemouth, which makes it likely that things would benefit them if it comes down to goal difference. As such, every point Bournemouth can rescue could make the difference between playing in the Premier League next season or not, and the scrap for the remaining promotion places is about to get tenser than ever.