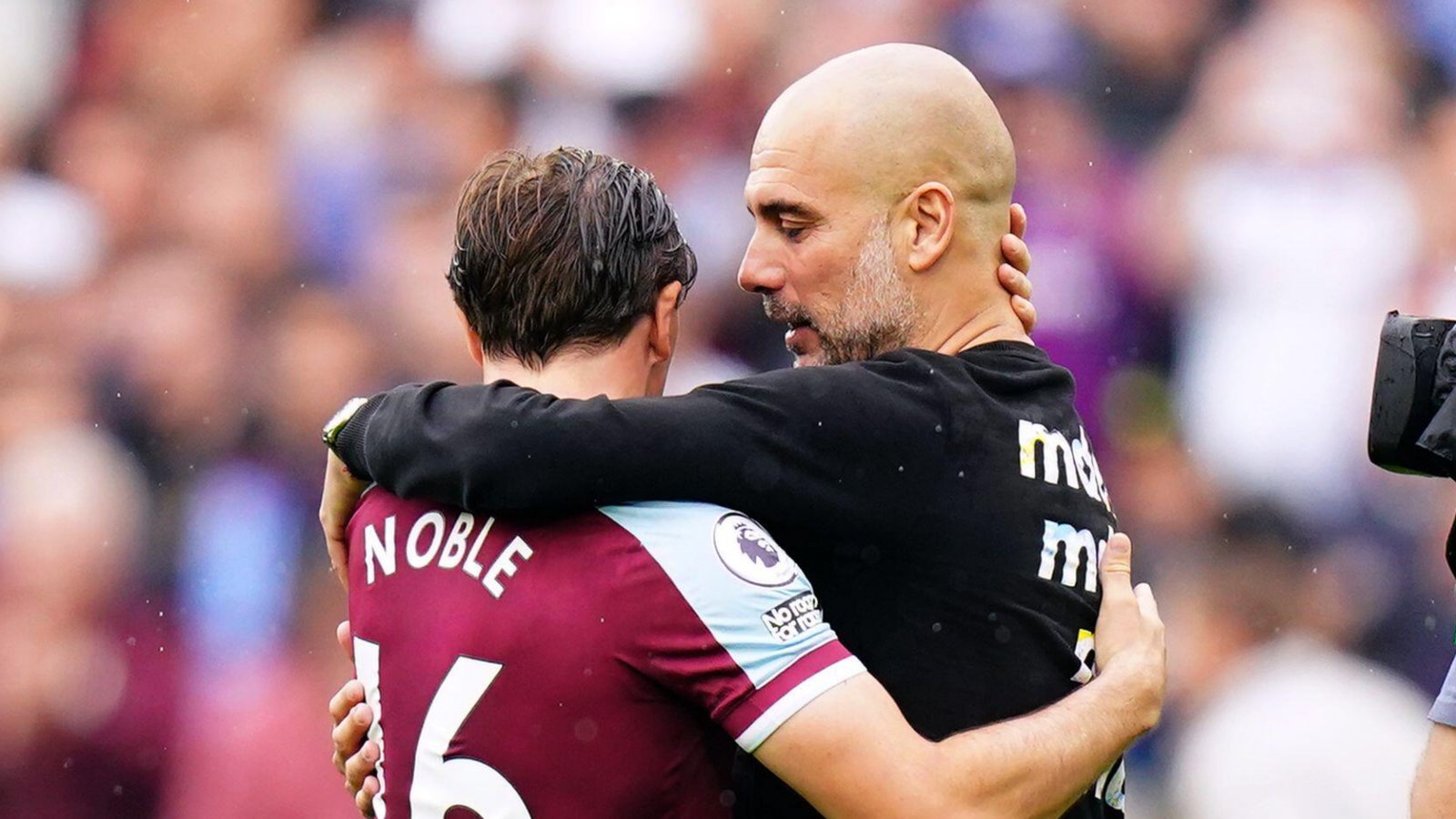 Jarrod Bowen tormented Man City but Pep Guardiola and his players issued a fine response to recent criticism and maintain a grip on the title.

“Pep Guardiola’s got a massive job on,” said Gary Neville, but it was West Ham and Liverpool fans nursing a collective rigidity as Jarrod Bowen snorted Manchester City’s high line for a second time. The home farewell of Mark Noble was a cast-Irons guarantee of classy touches throughout the afternoon but few were as elegant and conclusive as those of the goalscorer.

The only players to see less of the ball in the first half at the London Stadium were Vladimir Coufal and Craig Dawson, yet those fleeting moments in possession were optimised by Bowen. A few things happened only twice in those opening 45 minutes: Lukasz Fabianski deciding not to waste time; Oleksandr Zinchenko losing all concept of focus; Bowen timing his run on the shoulder to perfection; a teammate finding it with glorious precision. West Ham turned a pair of goal kicks into goals in the 24th and 45th minutes respectively and a makeshift Manchester City defence was in disarray.

This was one of Kyle Walker’s best games. Joao Cancelo, Fernandinho, Aymeric Laporte and Zinchenko could find neither their individual nor collective bearings. The generally unflappable Ederson vacated both his area and senses in the second half to jump-start a period of panic which the visitors barely survived.

By that point, Jack Grealish had halved a historically daunting deficit. Manchester City had never won a Premier League away game in which they trailed by two goals or more at half-time. It sounds like one of those ludicrously specific and meaningless statistics – it’s not as though they regularly have the chance to correct it – but it added to the sense that Pep Guardiola and his players are battling against both narrative and precedent for the title. It didn’t help that they also spent half of Sunday fighting against themselves.

Grealish led the semi-revival, bouncing a volley into the ground and off Craig Dawson to make it 2-1 four minutes into the second half. Coufal would have made Keith Houchen proud with the headed equaliser from a teasing Riyad Mahrez cross shortly after the hour. The Manchester City forward, made to go it alone from the penalty spot after Dawson fouled Gabriel Jesus, erred in the face of Fabianski.

It was the first time Mahrez had missed from the 12 yards in the Premier League since a goalless draw against Liverpool in October 2018. Sometimes it really must feel as though the media is not the only thing supposedly intrinsically weighed in favour of the Reds.

But Manchester City retained a modicum of control in the race from a position of hopelessness. A draw makes Liverpool’s inevitable 9-0 win over Southampton on Tuesday far easier to bear; goal difference is no longer a factor. That fate-tempting final day, playing host to Steven Gerrard and Aston Villa – as well as what is sure to be an unbearable week of media build-up – must still be negotiated with victory. But three points will be a guarantee of a fourth championship in five years. For a time on Sunday, it really did feel as though all might have been lost.

Guardiola will demand an improvement. Those fitness issues undermined the league’s best defence and West Ham’s phenomenal organisation and transitional threat removed much of Manchester City’s attacking sting. That Kevin de Bruyne-inspired crispness and clarity against Wolves was absent.

What eventually rang true was the sort of character, mentality and substance Liverpool are always credited with but Manchester City are routinely mocked for lacking. Considering Guardiola “doesn’t want leaders” or “personality”, they showed an abundance of both when needed against West Ham to keep their noses ahead.