Home World Cup Brazil are World Cup favourites, and they have 20 years of hurt to undo in Qatar… 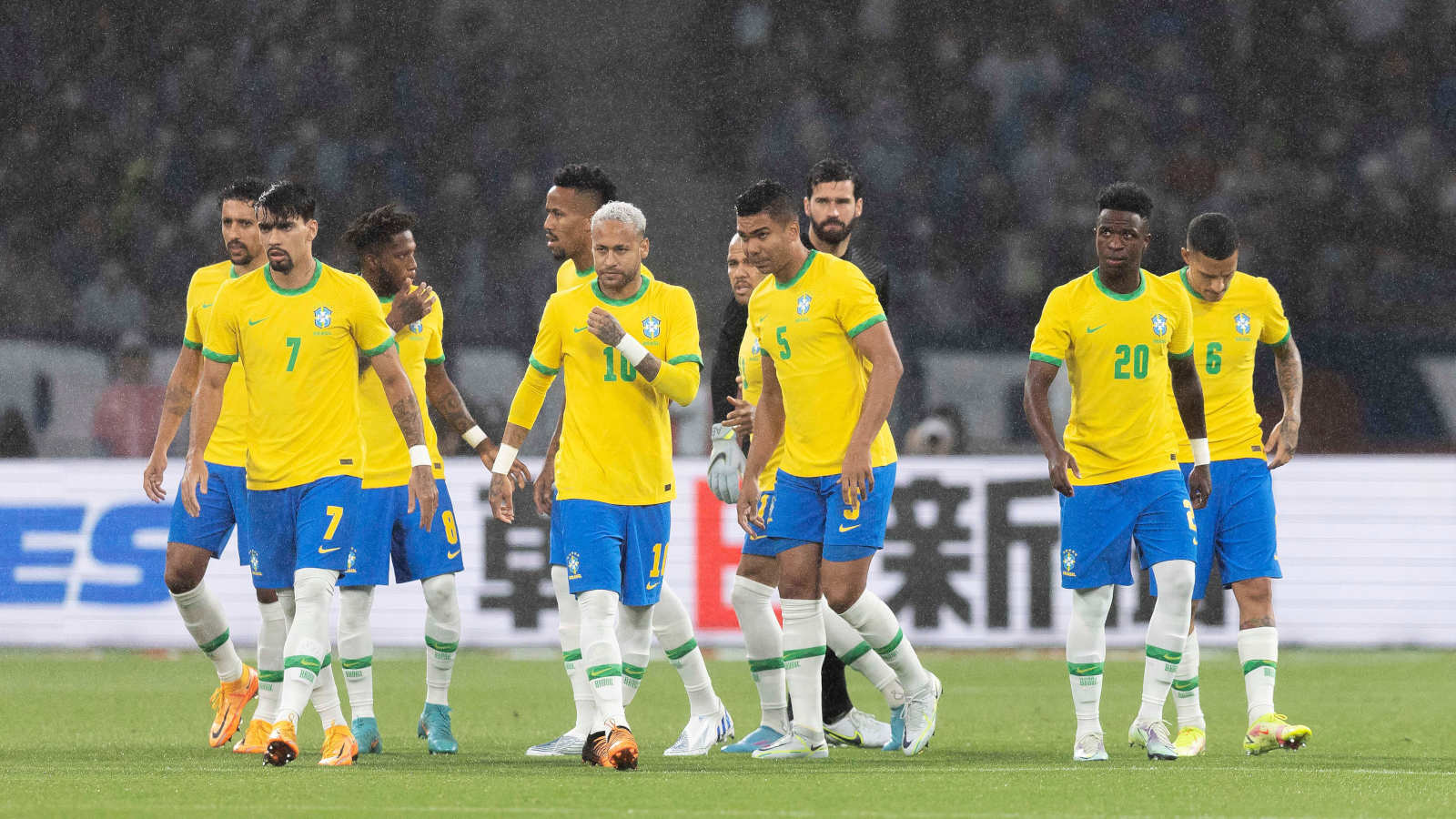 It’s been 20 years since Brazil beat a European team in the knockout stages of the World Cup, but they’re the favourites to win this year.

As everybody knows, the best World Cup is the one that falls closest to your tenth birthday, and for me that was 1982. My early experience of the game that it was a grey game played on dark brown pitches by teams that got covered in mud within the first ten minutes, a world in which whacking the ball unceremoniously out of the ground was greeted with as much applause as a defence-splitting through-ball, and matches played in half-empty grounds in front of frequently sullen (and occasionally violent) crowds.

In comparison with this, the 1982 World Cup finals in Spain were an assault on the senses. The over-saturated colours of Spanish television and the sound of air horns and muffled commentary, often struggling to be heard over the noise of the crowd. And both the most over-saturated and noisiest team of all was Brazil. They were good. Everybody knew that. But they were also unknown. Of the 24-player squad, only two played in Europe, and one of those, Dirceu of Atletico Madrid, was a squad player rather than a starter.

The other one, Eder, played for Roma and was a known name. But the amount of football that most people in Britain had actually seen of the rest of say, Zico, Socrates, Eder, or Serginho, was very little indeed. When they were knocked out by Italy in the second group stage, beaten in 3-2 in a match they only needed to draw to qualify from, it did feel as though the heart of the tournament had been ripped from it. The Brazil men’s international team has never quite been the same since, despite two World Cup wins in the 40 years since.

🇧🇷 Forty years ago tonight Éder scored this 88th-minute winner against the Soviet Union in Brazil’s opening match of the 1982 World Cup in Seville. This is probably in my top three favourite World Cup goals. BBC commentary by Barry Davies. pic.twitter.com/mi2Ujtt6TK

The last of those came 20 years ago. The 2002 World Cup was a curious affair in which surprise results throughout the tournament opened the knockout stages up. France, Portugal, Argentina and Croatia all fell in the first round, Italy in the second, and Spain in the quarter-finals. But Brazil chugged past Turkey, Costa Rica and China in the group stage, the only team to record maximum points, and then past England in the quarter-finals with the assistance of one of the World Cup’s great goals from Ronaldinho. The English press immediately denounced the goal as a ‘fluke’, and they were half-right. Speaking to FIFA many years later, the player himself said: ‘When I hit the ball I wanted to shoot for goal – but maybe not exactly where the ball ended up. If I’m being totally honest, I was aiming for the other side of the net.’

They glided through the tournament without ever setting it alight, as though protected from the drama that seemed to be going on elsewhere, and beat Germany 2-0 in the final. But this wasn’t the start of another dynasty. Since then, Brazil have only got past the quarter-finals once, and we all know what happened then, against Germany in 2014. But Brazil have been treading water in the World Cup finals for two full decades, now. Astonishingly, they haven’t beaten a European side in the knockout stages since beating Germany on Yokohama twenty years ago. And this is all the more surprising when we consider the the flow of player traffic should have made Brazilian players more familiar with their opponents.

In 1986, when they were knocked out in the quarter-finals on penalty kicks by France, Brazil still only had two foreign-based players, the same number as England. But by the time they won the trophy for first time in almost a quarter of a century in 1994, that number had swollen to 11. It jumped again to 13 in France in 1998, but in 2002 it was back down to 10. But the 2002 win changed things, it would seem, perpetually. Only three of the 23-player squad in Germany in 2006 were domestically-based, and this has been the case ever since, apart from in 2014, when the number was four. It was also four for their recent pair of friendlies against Japan and South Korea, but this was from 28 players called up.

In several ways, this shouldn’t make sense. After all, by signing for big European behemoths, Brazilian players were receiving the best coaching in the world, and they would be able to get more familiar with their opponents at the same time, too. But this emigration evidently hasn’t had a beneficial effect on the national team. Some have blamed their use as a marketing arm of Nike (a common complaint since the 1990s), or that a group of foreign-based players may not knit as tightly as they might do, if all mostly based in the same league. After all, European and South American club teams seldom meet competitively. Others have blamed the decrepit state of Brazilian club football, but this is set to be addressed with the formation of a breakaway Premier League of their own called ‘Libra’, which hopes to address the state of Brazilian football, but as with so many things in this huge and often contradictory country, it’s complicated.

But it only takes a quick glance at the last Brazil squad to understand why this team are the favourites to win the upcoming World Cup. They have two of the very best goalkeepers in the world, in Alisson and Ederson (head coach Tite seems to prefer Alisson), and three players with more than 100 caps, with Dani Alves somehow still going at 39 years old, despite having just left Barcelona after returning during their crisis last season. They have Thiago Silva, Danilo, Marquinhos and Eder Militao among their defenders, and Casemiro, Countinho in their midfield. But it’s in attack that things start to get frightening: Richarlison, Neymar, Gabriel Jesus, Rapinha and Vinicius Junior to choose from. With Neymar having already mentioned that this may be his last World Cup, those are expansive attacking options.

Three of those attackers have been the subject of transfer gossip for weeks. Richarlison is being linked with Spurs at the time of writing, and Gabriel Jesus and Rapinha with Arsenal, though this remains within the realms of speculation, for now. But it is striking that three of the more enduring transfer sagas of the first couple of weeks of this transfer window have all involved varying degrees of Brazilian muscularity mixed with a penchant for the unexpected. Whichever coaches end up with these three players, it will be fascinating to see how they fit into new environs in the Premier League, next season.

Are the stars aligning for Brazil in 2022? Well, they did in 1962, when they won the World Cup in Chile. They should have done but didn’t in 1982, which is a whole other story in itself. In 2002, they glided serenely through the mess and quietly got on with the job of beating everybody they needed to beat until they’d won it again. And in 2022 they’re the favourites again and beaten just once – in the final of the 2021 Copa America by Argentina, no less – since November 2019. None of us can ever fully capture those feelings from the past. The world is a different place now to either 1982 or 2002. We can’t go back. And if this World Cup is deeply imperfect and likely to leave a sour taste in the mouth for many, FIFA probably need a strong, vibrant Brazil team even more than usual.