Home F365 Says Breaking records is easy; Son and Kane are creating them 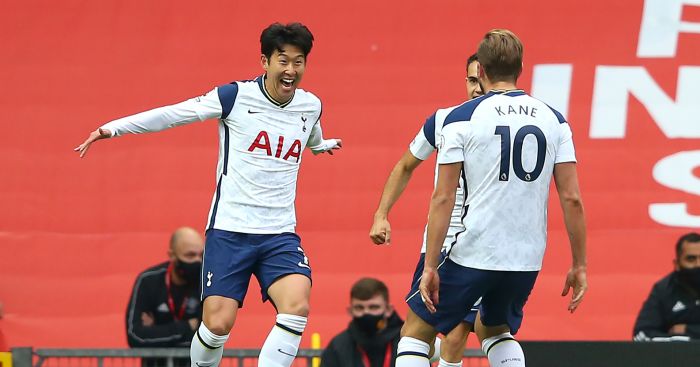 Harry Kane and Son Heung-min are currently in the midst of a truly extraordinary run of form. You know it’s particularly extraordinary because suddenly everyone is talking about a thing that nobody has ever talked about before.

If you think about it, there can be no greater indication that something is extraordinary than the very fact it’s causing people to talk about a thing that nobody had ever talked about before. Breaking a record is one thing; creating one out of thin air is even better.

To the great list of now-common everyday phrases nobody would ever have used this time last year, including “social distancing”, “Marcus Rashford MBE” and “Gary Sambrook eats big dinners” we can now add another: “goal combinations”.

It’s a perfect storm for this sort of thing. Firstly, while novel it is a proper cumulative record, not some cricket-style “Highest ever partnership! For England! Against India! At Trent Bridge! For the seventh wicket! In the second innings! On a Wednesday! In July!” concoction, caveated beyond all meaning like that ludicrous Thiago 45-minute pass record that was doing the rounds after his debut.

The concept is also straightforward and intuitive – we all understand “goals” and most have now got their head round the fractionally trickier concept of “assists” – yet just obscure enough that while the data is available it takes an amount of spadework to put it all together.

The existing record is also an attractively low number, which helps put Kane and Son in context and does so in a pleasingly dramatic way. They have now combined for nine goals in six games this season. We could all surmise that this is eye-catchingly and unusually high. But how mad is it? When that six-game run represents one quarter of Didier Drogba and Frank Lampard’s all-time Premier League goal combination record, even though it is a record nobody has ever cared about for even a second, it pleases some weird part of the brain.

I genuinely don’t recall anyone ever talking about it before. You might, after giving it a bit of thought, have come up with Drogba and Lampard as the current Premier League record holders but I would dismiss as a liar and a charlatan and a cad all but the very boffinest of stat nerds who claimed to know this information off the top of their head.

Shearer and Sutton had their snazzy little nickname but nobody talked about their goal combination numbers. Anderton and Sheringham – still fifth on the Premier League list with 26 after all these years, not that you’d have known or cared until about three weeks ago – had a famous corner routine even though it only actually led to about three goals and a million bungled imitations, but never breathless pundit chat about their GC stats.

But it’s a thing now, and that means it will remain a thing. Even after Son and Kane go past Drogpard’s tally in about a month, every additional notch on the post will be greeted with the table showing them extending their lead. Any future unsustainable purple patch of co-creation from an upstart pair of Premier League chancers will be likened to Kane and Son’s legendary 2020 run, thoughts on whether this latest duo will be able to reel in the Spurs lads, and idle speculation on the likelihood of them replicating the famous Treble that Kane and Son’s run so famously secured for their previously banter-ridden club in that strangest and most memorable of seasons.

Records that nobody knew or cared about before they became a topical talking point are tremendous fun, and we’re also looking forward to talk of Kane breaking the record for total “goal contributions”. He, of course, is no stranger to this sort of thing having in 2017 famously broken the non-existent record for most goals in a calendar year, which remains a non-standard unit of measurement that has no place in football statistics of any kind.

The other good thing is that Kane and Son are no longer even pretending not to be bothered about numbers or records in that way pro sportspeople often feel weirdly obliged to. A record that neither of them would even have known about six weeks ago is now enough to have Son celebrating a crucial winning goal at Burnley and then celebrating again once he realises Kane has got the assist once more.

It’s win-win. Unless you’re Didier Drogba or Frank Lampard, in which case you and your pitiful goal combination numbers are about to be consigned to the losers’ scrapheap for losers where you belong.