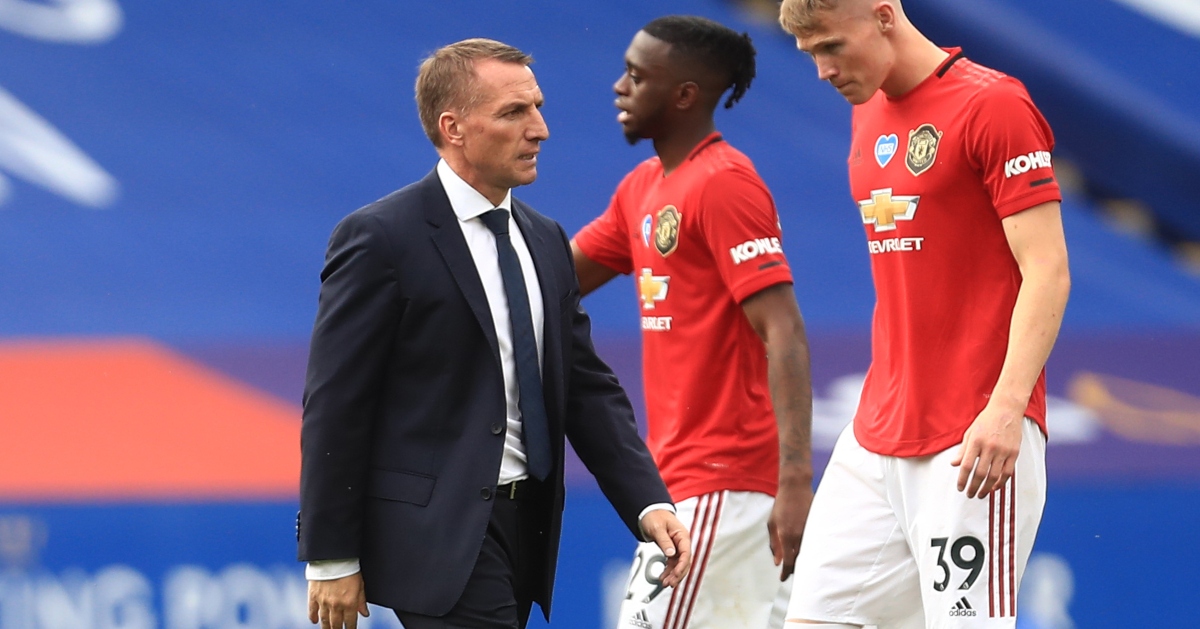 Manchester United should not rush into a deal with currently the only willing and just-about-credible candidate to be their next manager. Brendan Rodgers would be wise to wait too…

There are a few good reasons why Brendan Rodgers is attractive to the Manchester United board.

Firstly, he’s British which, for reasons unknown to anyone outside Old Trafford, is apparently important. Then there is the manner in which he has rebuilt his reputation since being sacked by Liverpool in 2015.

Rodgers went to Celtic and dominated Scottish football. He returned south and made Leicester one of the most vibrant clubs in the Premier League. Now, the Northern Irishman is again being considered by elite clubs, with United and Manchester City both tuned into his talents.

And Rodgers is desperate for another crack at the big time. He was letting it be known that he would gladly replace Pep Guardiola at City before the links with United really started to gather momentum. Now, it would almost be a surprise if Rodgers does not to become the next United manager.

Mailbox: Are Man Utd fans on board the Brendan train?

But United and Rodgers should think very carefully before getting into bed with one another; any future together looks fraught with danger for both parties.

For United, Rodgers is not so much Mr Right as he is Mr Right Now. As it stands, he is arguably the outstanding candidate for the position. But only because the field is so sparse.

The Red Devils allowed the best man for the job to take over at Tottenham and other coveted managers like Zinedine Zidane and Erik ten Hag aren’t interested in swapping their cushy numbers – one is enjoying his life away from management, the other thriving in the serenity of Ajax – for the dumpster fire at Old Trafford.

Which leaves Rodgers as one of the few remaining candidates presenting a solid case. But United don’t seem to be planning to poach Leicester’s manager any time soon; they appear content to let their season and their current manager drift all the way to next summer.

By then, football management being the wildly unstable employment sector that it is, who knows how the talent pool might look? United can hardly be accused of acting in haste over Solskjaer, and they certainly should not change tack for Rodgers.

Because while his record since being shoved through the Anfield exit is admirable, does it really stand up to scrutiny in view of the job spec at Old Trafford?

He led Celtic to an undefeated domestic season in his first year at Parkhead and his two full campaigns concluded with Trebles in each. But the absence of a competitive Rangers side, who returned to the top flight just as Rodgers took over, cannot be ignored. There is hardly an asterisk by Rodgers’ achievements in Scotland but context is important.

The way he has improved Leicester is arguably more impressive. Under Rodgers, the Foxes have recruited well – which perhaps speaks better of the structure at the King Power – but the manager has certainly played his part in improving Youri Tielemans, James Maddison, Caglar Soyuncu, Wesley Fofana and Harvey Barnes. With much of the talent at Old Trafford stagnating, that factor certainly enhances Rodgers’ candidacy.

But for all the promise at Leicester under Rodgers, the Foxes have faded too often in the Premier League. In both of his full seasons in charge, they have disintegrated in the run-in to pass up a top-four place.

In 2019/20, from the end of August to the final day of the season, Leicester were in the Champions League places before passing up the final spot to Solskjaer’s United after only two wins in the final eight games. It was a similar tale of woe last term, with the Foxes in the top four from the turn of the year until the last day, when they lost to Ryan Mason’s Spurs at home after relinquishing the advantage to Chelsea a few days before.

Ahead of that Chelsea trip, Rodgers won for Leicester their first ever FA Cup, which is another achievement that should not be ignored. But given the importance we know the Glazers place on Champions League participation, Rodgers’ habit of blowing up down the final straight is a concern for them. As it was for Liverpool in 2013/14.

His Liverpool history is also a problem. Perhaps it shouldn’t be – it wasn’t for Sir Matt Busby – but it really would be in the modern landscape. As Rodgers admitted himself. “When you manage Liverpool, you know the Manchester United job is gone,” he said towards the end of 2015 after being sacked at Anfield.

If it actually isn’t ‘gone’ and the Old Trafford board can see past his Liverpool links, Rodgers would not have the luxury of time to get his feet under the table. The pressure would be on from the very start and as soon as United hit a rocky patch, the knives would be out. The Liverpool connection would be an issue for United fans and among the wider public, Rodgers would become a figure of ridicule again. The envelopes, the Brent-isms…Rodgers would be treated as mercilessly as Solskjaer unless he wins from the very start at Old Trafford.

You might say the same about most managers, but there are some whose record and reputation buys them protection from premature flak. Zidane and Conte for example. Mauricio Pochettino too perhaps, even if he has won fewer pots than Rodgers.

Don’t believe that the players won’t think in a similar way. Would the egos at Old Trafford embrace Rodgers as soon as he walks through the door? Rightly or wrongly, to Cristiano Ronaldo, Bruno Fernandes, Raphael Varane and co, almost certainly it would be Rodgers who has it all to prove to them, which in terms of a team dynamic is very much an arse-about-face way of doing things.

Still, though, Brendan remains the leading candidate, which is why United, since they have dallied already, shouldn’t feel the need to suddenly start rushing things for Rodgers. Maybe there won’t ever be a perfect man for the job. Maybe the Glazers should have their CEO of media Matt Lynch bring up his twice-daily ‘fan sentiment graphs’ and pick the team based on those. You just know they’ve considered it…

But should United opt to go down the more traditional route of appointing a human to the position of manager, then they would be smart to look beyond the only willing and just-about-credible candidate there currently is. And Rodgers too would be better served waiting for Pep’s next sabbatical.