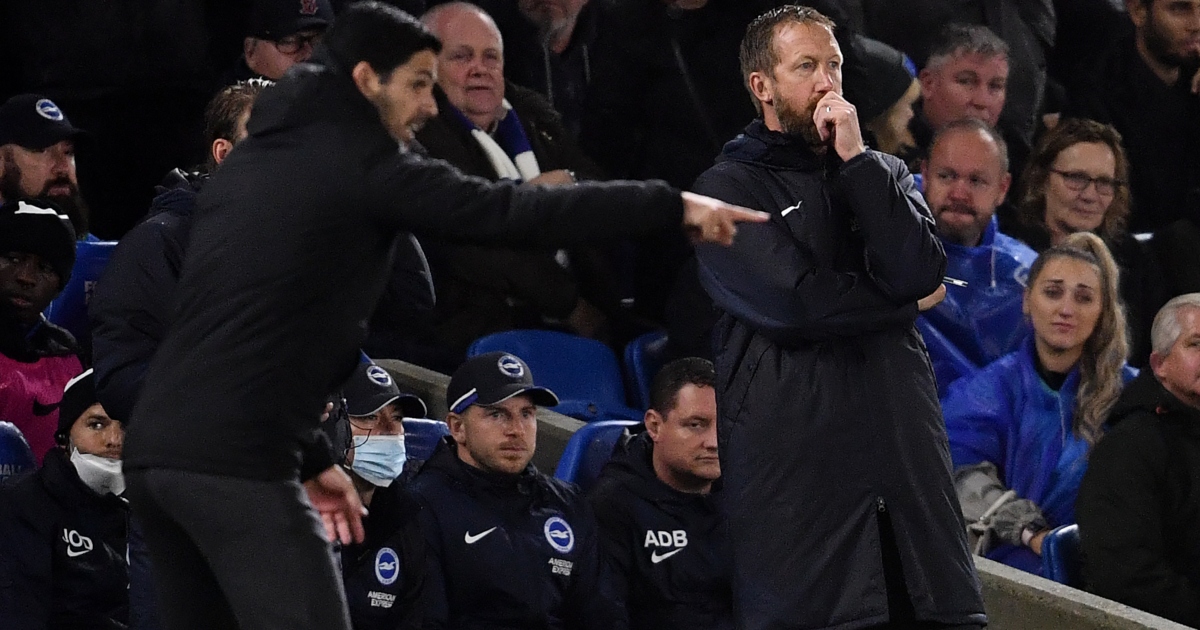 There were some major positives for Graham Potter and Mikel Arteta, even if some old habits crept back in at the AmEx…

For a goalless draw in the p*ssing rain which featured just four shots on target – only one of which could be described as a test for the keeper – that was a lot of fun.

Once Graham Potter and Mikel Arteta have dried out, both will take varying degrees of encouragement into the international break, with the Arsenal boss perhaps more glad of the single point. For sustained periods, especially before half-time, Brighton dominated the Gunners but in a reversion to their 2020/21 selves, the Seagulls failed to make their superiority pay.

They mustered 21 efforts on Aaron Ramsdale’s goal, but the Arsenal stopper was more troubled by crosses than any of the Seagulls’ shots. From one of those deliveries, which Ramsdale dropped, Lewis Dunk skied their best opportunity, while Dan Burn, Neal Maupay and, late on, Shane Duffy all failed to hit the target from close range.

Flashbacks among the home supporters to last season, when Brighton would have finished in the top six had they matched their xG, would have been understandable but more than his concern over his side’s wastefulness, Potter will be heartened by a performance that justified their lofty position in the Premier League and their status for the first time in almost 40 years as the higher placed of these teams before meeting in a league encounter.

Brighton hogged the possession and retained the initiative seized during a dominant first-half display through a second period in which Arsenal changed tack but still struggled to get a foothold in the game.

REACTION: Arteta ‘concerned’ as Arsenal can do ‘a lot’ better

But the positive for Arteta was the Gunners’ resilience. Fielding arguably his strongest XI with the exception of Granit Xhaka, the Arsenal boss will have been hoping to build on last week’s north London derby triumph, but he may have learned more about his players here at the AmEx than he gleaned from a procession against a wretched Spurs.

Despite the concession of all those shots, Arsenal defended stoically, with Gabriel and Ben White continuing their blossoming partnership in front of a goalkeeper who is defying expectations during the early weeks of his Gunners career.

That trio, without Xhaka, too often lacked an out ball, with Thomas Partey and Albert Lokonga excellently screened by Leandro Trossard and Jakub Moder, and boxed in by Pascal Gross and Adam Lallana, which forced Arsenal often to go long. This is never Arteta’s preferred style, especially with Pierre-Emerick Aubameyang playing as the target man.

Arteta could have replaced his captain earlier the 72nd minute and Alexandre Lacazette immediately looked more comfortable playing with his back to goal, linking play with Emile Smith Rowe, who by that time had moved inside to take over the No.10 role from Martin Odegaard. The former Real Madrid playmaker’s AmEx anonymity will not greatly worry Arteta, who could at least call upon different options in reserve, with Nicolas Pepe bringing a different threat from the bench, even if he struggled to show it.

Arsenal’s ineffectiveness down their right was thanks in no small part to the excellent Marc Cucurella and Potter’s bravery in playing the left wing-back so high that Takehiro Tomiyasu could neither get forward himself or drift too far inside to allow Kieran Tierney to bomb on from the opposite flank.

But despite their problems in asserting themselves on Brighton, they dug in. Which for Arsenal, still represents progress.

Compare this stubbornness, and the resilience they showed at Burnley a fortnight ago, to the series of capitulations before the last international break, and Arteta will go into this next fortnight of inactivity feeling infinitely more at ease.

Potter may well rue only two points from a possible six this week, but he too has plenty to be positive about. Especially the way in which Brighton have coped without key players. Potter is missing arguably three of his strongest XI – Adam Webster, Yves Bissouma and Danny Welbeck – while Tariq Lamptey is being eased back in after a long-term layoff but the Seagulls have assembled some serious strength in depth, something they have never possessed since becoming a Premier League outfit.

Potter was one of the names being mentioned as a possible candidate to replace Arteta when Arsenal were winless and seemingly hopeless last month and the intrigue over what the Brighton boss could do with greater resources will remain until he is given the opportunity to prove it. But in the meantime, it is already clear that Brighton’s start is no fluke. And the tangible progress made since last season means a brief return to their old profligacy should not cause too much panic on the south coast.