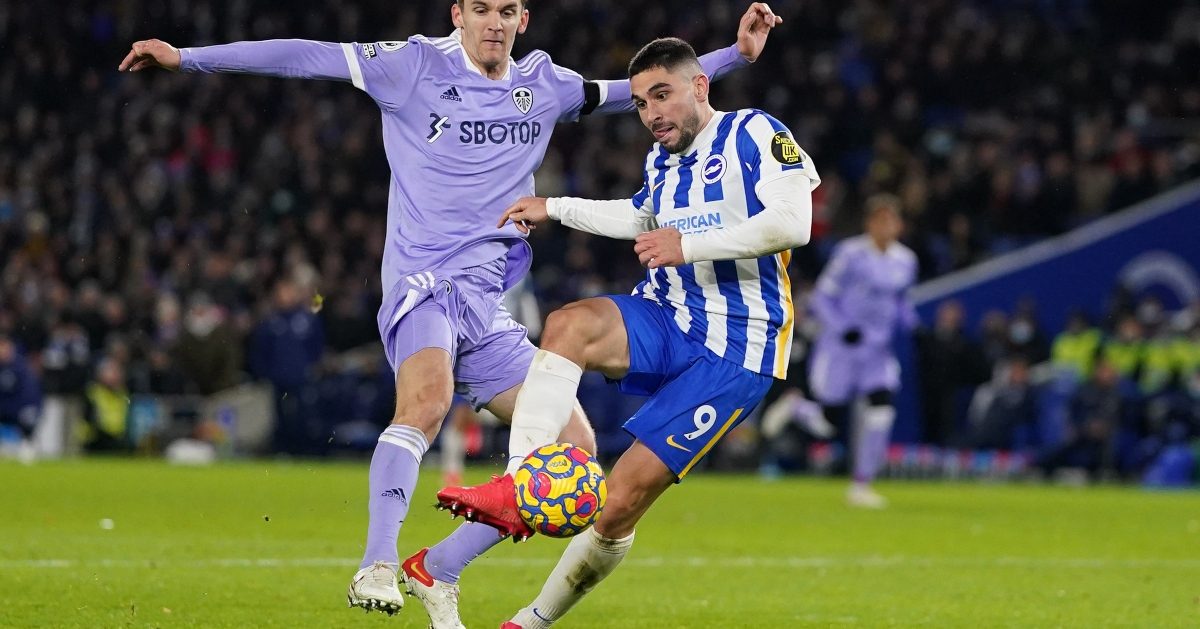 For Graham Potter and Marcelo Bielsa there was little new to learn while sharing the points at the Amex. But a goalless stalemate must have strengthened the resolve of both managers to go shopping for a forward when the January sales begin.

The fact Brighton and Leeds finished an entertaining but utterly predictable draw with Jurgen Locadia and Tyler Roberts as their respective centre-forwards suggests both know what is necessary. In Potter’s case, Locadia’s participation – his first in the Premier League since August 2019 and it showed –  felt more like a pointed message to the Brighton board than a genuine attempt to win a game that should have been in the bag by the break.

Unlike at times this season, Brighton created huge chances against Bielsa’s men but they were hopelessly toothless while trying to take them. The Seagulls have sometimes struggled to break down opponents content to sit in and dig deep but that wasn’t the problem here.

Tariq Lamptey’s return was a large reason for that. The right wing-back is being eased back into action by Potter after a long lay-off but Lamptey looked fresh, fit and fast as f***, especially during a first half in which he created more chances than any other Brighton player has in 90 minutes this season.

Leeds’ withdrawal of Junior Firpo was an act of mercy, with the left-back tortured by Lamptey before Bielsa put him out of his misery. Lamptey was credited with creating one ‘big chance’ during the first half, though that label does not do justice to the simplicity of Neal Maupay’s opportunity, one he passed up by sidefooting way over the bar into the East Sussex sky.

Maupay did similar in the second half, though the striker will insist he heard the whistle which would have ruled out the goal had he not so hopelessly missed it. It was one of 14 shots off target Brighton attempted, a joint high in the Premier League this season.

This is nothing new for Brighton. Last season, had their goals output matched their xG, they would have been in the top six. That should have been reason enough to go and buy a goalscorer in the summer, but the Seagulls made do with re-signing Danny Welbeck.

Welbeck’s absence has been a blow for Potter but relying on the former Manchester United and Arsenal striker to stay fit is the very definition of hopeless optimism.

Such positivity is in sparse supply at Leeds right now, with injuries an even bigger problem for Bielsa.

Patrick Bamford, we are led to believe, should be back in the next fortnight and the centre-forward’s return cannot come soon enough. Especially all the while Leeds fans are having to watch Roberts and Dan James toil as their central striker.

Last week, it was Joe Gelhardt’s turn to plough a lone furrow while Bielsa desperately tried to compensate for Bamford’s absence. Bielsa seems set on Rodrigo being utilised in a deeper role – his reluctance to use Spain international as a centre-forward while Bamford is out certainly suggests so – which means Leeds have to be creative in finding cover for their leading man.

Even if Bamford is on his way back, the search for alternatives must extend into the January transfer window. Bielsa famously likes to work with a small squad while Victor Orta doesn’t see value in the winter window, but Leeds’ position should make both men rethink their stances.

Unlike United, Brighton aren’t looking over their shoulder – yet. Their fine start to the season, when they occupied a Champions League spot means that a run of eight without a win leaves them still in eighth, but only three points above 13th.

Not since September 19 have they won in the Premier League. In some games during that run, their attacking problems have gone beyond the absence of a finishing touch, but Brighton certainly won’t arrest this slump without a sharp increase in their ruthlessness.