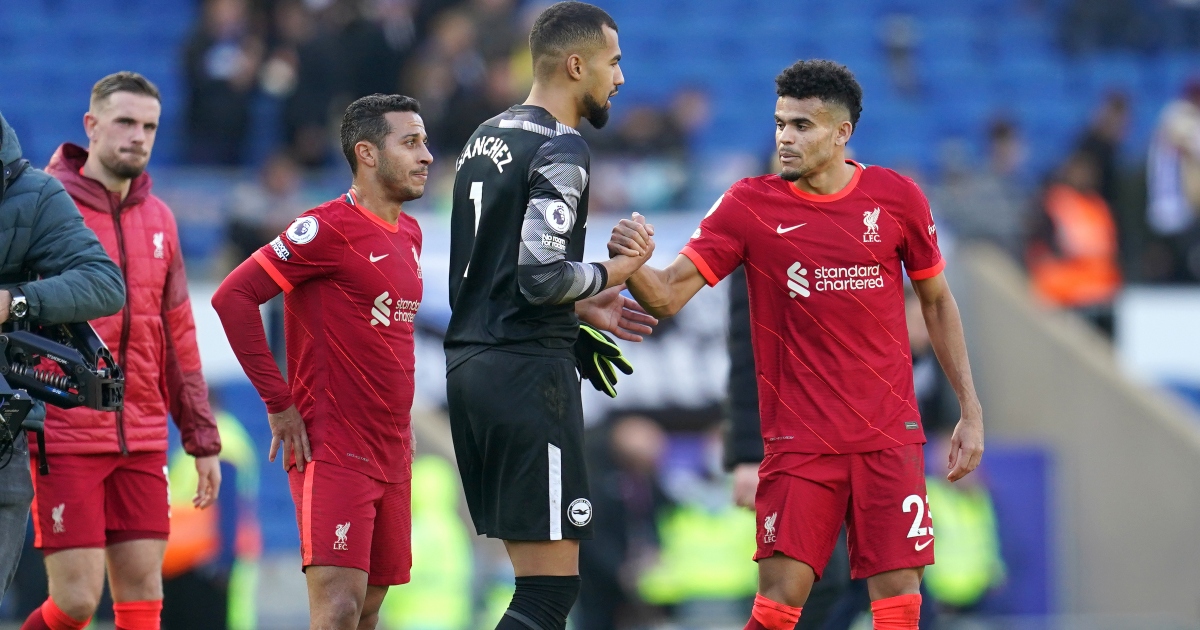 With a hefty thwack from 12 yards at the AmEx, Mo Salah further cemented his Liverpool legacy.

His goal, the Reds’ second in a straightforward win over Brighton, took him to 20 Premier League strikes for the season, making him just the sixth player to hit that mark four times or more. And only Steven Gerrard now has had a hand in more Reds’ goals, with Salah moving level with Robbie Fowler.

Still, prior to the trip to the south coast, Jurgen Klopp appeared extremely relaxed over the prospect of losing the Egyptian, certainly more so than some of Liverpool’s supporters. The attacker approaches the final year of his contract with no sign a renewal in sight.

“We cannot do much more, that’s how it is,” said Klopp on Friday. “It’s Mo’s decision pretty much. The club did what the club can do. That’s how it is. Nothing bad to say about it. It’s fine from my point of view. It’s exactly like it should be in this moment in time. It’s completely fine. No rush in that situation.”

Klopp doth protest too much? Actually, no. Like the German says, it is “completely fine”.

Of course, ideally from Liverpool’s perspective, Salah re-signs. He is arguably the Premier League’s best player and undeniably one of the very best in Europe. Any side who loses Salah will be weaker for it.

But even before they explore potential options to replace Salah, the Reds look well set to absorb the potential blow of losing him should no agreement be forthcoming and the club’s hierarchy opt to cash in. The evolution of their front three is well underway, with Luis Diaz set to be a huge part.

The Colombian attacker also helped himself to a goal at the AmEx as part of a man-of-the-match performance in his 10th appearance for his new club.

Liverpool were forced to move earlier for Diaz than they might have wished with Tottenham and West Ham sniffing around the former Porto forward, but the 25-year-old appears to have required no bedding-in period, settling in no time.

Diogo Jota was the same. The presence and success of both – early days though it may be for Diaz – has enabled Klopp to consider a future without a chunk of his trusted front three, and while Salah might be the one of that established trio he wishes most to keep, Liverpool are in a stronger bargaining position than they might have anticipated.

As you would expect, Salah’s agent feels the Reds are overplaying their hand. Ramy Abbas, apparently not a sassy teenager, responded to Klopp’s assertion that Liverpool “cannot do much more” with a tweet consisting solely of cry-laughing emojis.

Abbas will doubtless be laughing all the way to the bank when Salah signs his next deal, wherever that might be. The player, it would seem, would rather it be right where he is and though he turns 30 before the start of next season, the Egyptian clearly has a number of seasons yet in which he could match Alan Shearer’s seven 20-plus goal campaigns.

And maybe Liverpool can do more. They could bow to all Abbas’ demands if they saw fit but, as Raheem Sterling and Philippe Coutinho found out, apparently they do not. And things worked out just fine in those cases.

Everything went swimmingly for Liverpool at the AmEx. Aside from starting briefly on the back foot with a solitary scare at the start of the second half, Klopp’s men enjoyed a serene afternoon in the East Sussex sunshine.

The Seagulls’ dreadful run continued, with this their fifth consecutive defeat. Having previously gone three without losing to Liverpool, at no point after the early minutes did that creditable run look likely to be extended.

Even during that early flurry, just as they kept their composure while Inter Milan chased a deficit on Wednesday, Liverpool barely looked ruffled. Brighton’s attackers looked more preoccupied with staying away from Virgil van Dijk and Joel Matip on and off the ball, and their ploy of leaving the centre-backs with possession backfired when Matip made the most of his space to lift a ball behind the hosts’ defence for Diaz to head home.

It cost the new boy a worrying whack but Robert Sanchez escaped a red card seemingly on the basis that Liverpool had scored. So no harm done – luckily for Diaz.

The Colombian looked quicker and sharper than Brighton all afternoon, with his first touch and ability to carry the ball while pushing opponents back his most obvious assets.

That’s two goals in 10 appearances for Diaz: hardly Salah numbers, but no-one could reasonably expect that. However, his early impact and the consistent quality Jota has displayed means Liverpool are certainly not in thrall to Salah as his agent might wish.