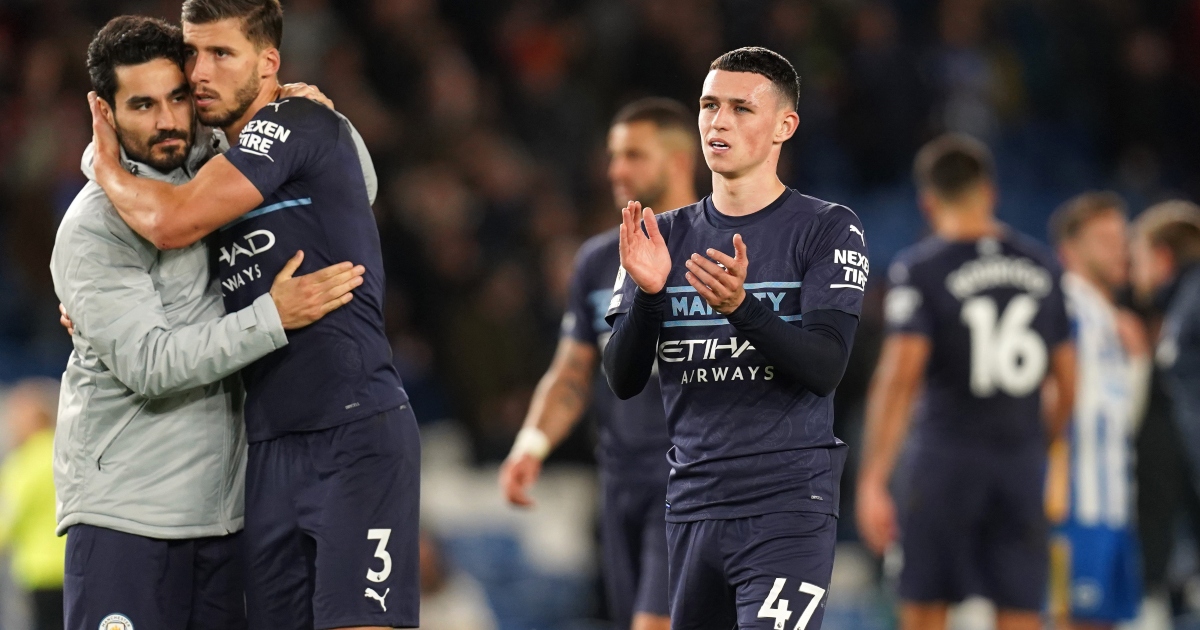 Would we have seen Phil Foden up front or Bernardo Silva at all if City signed Harry Kane? The champions are better for missing out…

Manchester City‘s best attacking performance of the season on Tuesday night came with a caveat: ‘It was only Club Brugge’.

That, of course, wilfully ignores the fine Champions League form the Belgians were in prior to being de-pantsed by City. PSG, with Neymar, Mbappe and Messi in their front three, were repelled by Brugge, while RB Leipzig were turned over on their own patch.

So, to prove it was no fluke, City turned it on again to pick apart one of the Premier League’s best defences. Only City and Chelsea had conceded fewer goals than Brighton before the champions turned up at the AmEx to win inside half an hour.

The common denominator between Tuesday’s battering of Brugge and tonight’s Seagull shoot was the presence of Phil Foden as the spearhead of City’s attack.

A fortnight after the clamour came for the England star to play in a deeper midfield role, now it appears Foden is a born centre-forward. Such is the Stockport Iniesta’s genius, however, Pep Guardiola could probably play him at centre-back and he’d prompt comparisons with Franco Baresi.

You could hardly call this Foden’s breakout season but it certainly seems that Guardiola has taken the reins off the 21-year-old. In the wake of the goalless draw with Southampton, which supposedly offered proof that City would suffer for the absence of a goalscoring centre-forward, Guardiola’s response was to thrust Foden through the middle. It has proved to be a masterstroke.

Foden was outstanding in City’s show of dominance over Chelsea even if the scoreline did not reflect their control, and though he was sublime on the left at Liverpool, he reverted to the middle against Burnley and Brugge. The goals did not flow, but it did not matter.

Foden was too clever for either opponent, knowing exactly when to play on the shoulder of the centre-back, and when to drop back closer to his own defenders to take the ball and create with his laser-guided long passing.

At the AmEx, Foden showed the other side of a natural-born striker’s game, grabbing a poacher’s brace. His first, City’s second came after a lung-bursting run to keep up with Jack Grealish, while his second owed more to his whereabouts than his wherewithal.

The only blot on Foden’s copybook: the failure to take a late chance that would have earned him a first senior hat-trick. That was one of eight shooting opportunities Foden carved out for himself, not that he was goal-hanging, as if Guardiola would stand for it. No player on the pitch covered more distance than City’s genuine false nine.

He keeps getting better. 🤩 pic.twitter.com/mJarTzjw7x

Of course, we might not have seen Foden thrive in this role had City signed Harry Kane in the summer. The prospect of what a fit Kane could do in this City side still stirs the senses but the deeper we go into the season, the more it seems shrewd judgement to leave the England striker at Tottenham.

Had Kane been signed, it almost certainly would have meant Bernardo Silva being sacrificed. The fact he remains at City may be more by luck than judgement since Guardiola seemed content to let the Portuguese schemer depart, but Silva’s form means the champions should consider themselves fortunate that he wasn’t sold to part-fund a deal for Kane.

Silva laid on City’s opener after latching on to Robert Sanchez’s dropped bollock, and played major roles in Foden’s brace even if he won’t be credited with an assist for either. “The club that gets Bernardo is going to take one of the best players in the world,” Guardiola said in the summer before he won the jackpot by default.

What of Brighton? They certainly gave City a helping hand. All the visitors’ goals came from errors, even if they were mercilessly punished. Once they had pulled their trousers back up and regathered some composure at the break, Graham Potter’s man rallied somewhat in the second half, just enough for this defeat to be attributed to an out-of-character half-hour of nonsense in addition to City’s ruthlessness.

They aren’t the first team this season or even this week to have all their vulnerabilities exposed and preyed upon by this City side and they certainly won’t be the last. Certainly not with Foden living up to every ounce of hype he ever generated.