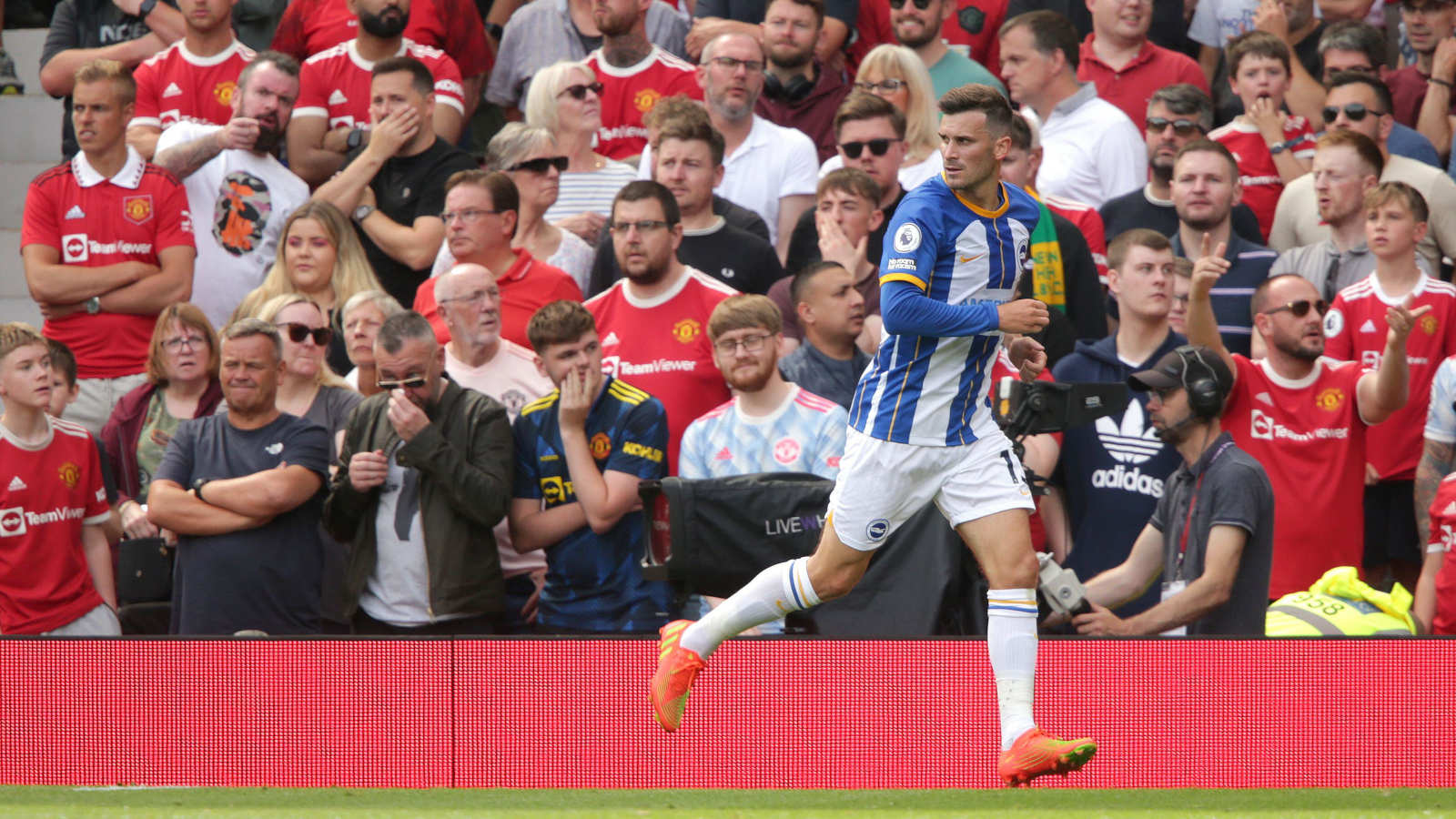 Attention will usually focus upon Manchester United when they lose at home, but for Brighton, winning at Old Trafford deserves greater praise.

There is a trope among Brighton & Hove Albion supporters that has become increasingly popular and prevalent in recent times. With every ‘surprise’ Premier League win that their team achieves, fans will search Twitter for the phrase ‘teams like Brighton’ and gleefully share what they find.

It is a particular joy to revel in the peculiar entitlement of some fans of other clubs, that they should be beating ‘smaller’ teams just by existing and regardless of any other considerations.

And this has become increasingly familiar over the last couple of years or so. Over the last two seasons, Brighton have beaten Spurs (twice), Manchester City, Arsenal and, following Sunday afternoon’s events at Old Trafford, Manchester United twice.

After a 2-1 win in their opening game of the 2022/23 season, there were few signs that things are going to change anytime soon.

That the media reaction to this result should have been so focussed on that perpetually cracked Manchester United badge is no great surprise. Not only are they the most-supported club in England, but the global nature of news delivery in an online world means that ‘traffic’ to new stories isn’t solely dictated from this country. The Premier League has a global audience nowadays, and it’s already a recognised phenomenon that interest in the Premier League from abroad is heavily concentrated on the ‘Big Six’ clubs.

But none of this means that what Brighton have achieved these last few years shouldn’t go without recognition. The story of the club’s ascent to the Premier League is well-told, from the malignant club owners who sold the club’s ground and then condemned them to two years of playing their home matches 70 miles away in Brighton, to their return to the town and their eventual move to a stadium, the construction of which was funded by a professional gambler and lifelong fan, has been well told.

It’s a somewhat different matter when it comes to demonstrating that they are plenty capable of mixing it in the top half of the Premier League.

Within 15 seconds of kick-off at Old Trafford they’d hit the side-netting, and by half-time Pascal Gross had scored twice to give them a two-goal lead.

An own goal halved the deficit midway through the second half after Brighton had been denied what looked like a pretty clear penalty by both the referee and the video assistant.

But while United huffed and puffed throughout the last 20 minutes and the noise inside Old Trafford grew to a familiar, desperate, near-incoherent roar, Brighton held on with no great difficulty.

Compact in midfield, organised in defence and clinical when they had their first-half chances, they won this game just as much as Manchester United lost it.

And all of this came in a summer during which they have lost two of their better players, Marc Cucurella and Yves Bissouma, to ‘Big Six’ clubs. It was a performance easily as impressive as United’s had been unimpressive.

Despite losing these two significant players, Brighton have held on to their greatest single asset.

Manager Graham Potter hit a perfect trifecta at Old Trafford: his team were tactically the more astute and flexible; the players’ performances were more refined, with fewer individual mistakes, lapses in concentration or straying from their tactical plan; and once they were deep into the game, they had the confidence to see out the last 20 minutes without many major concerns after the two-goal deficit had been halved in front of more than 70,000 hostile fans.

Quality, consistency and concentration. The holy grail for any football manager.

It may, in some respects, seem almost glib to say, but Brighton didn’t just win at Old Trafford – they won deservedly. At this moment in time, and without any need to resort of hyperbole, they are many of the things that Manchester United would like to be, but aren’t and haven’t been for some time.

It is understandable that the idea of the Premier League’s ‘Big Six’ being infiltrated by anyone without the financial clout of a nation state should appear inconceivable. The gulf in financial resources between these half-dozen clubs and the rest remains a yawning chasm. But Brighton & Hove Albion’s achievements don’t have to be counted only as a comparative.

Potter has built a squad that is tactically well-drilled and versatile, with players who are the right fit for their position and as flexible as their system requires them to be.

And this has been achieved while being easy on the eye. There are few more enjoyable sights in the entire Premier League than this Brighton team on top of their game, moving the ball around effortlessly and exercising their energy and aggression with judicious caution.

As for the prognosis for the rest of their season, that they can now beat #TeamsLikeManchesterUnited without too much difficulty – it was only three games since they beat them 4-0 at The Amex at the end of last season – doesn’t mean that the financial disparities don’t exist.

Manchester United’s ‘calamitous’ season still saw them finish in sixth place in the Premier League and qualify for this year’s Europa League. Over the course of the season, it remains expected that the mean will reassert itself and that the ‘Big Six’ will occupy the top six places again before too long.

There does remain the possibility that this might not happen, as ample weekend evidence suggested. But there are possible flies in Brighton’s ointment. They still don’t quite have the guaranteed goalscorer. Cucurella and Bissouma haven’t been replaced yet. And if you’re a club below the ‘Big Six’ with a well-regarded manager, you have to live your entire existence with the possibility of losing them to someone with deeper pockets lurking in the back of your mind.

But none of this has to translate to anything like fear, and the one thing we can say about Brighton’s win at Old Trafford is that they certainly played without that. But then, why shouldn’t they have done? Their opponents were as undercooked and sluggish as they’d looked when they met at the end of last season, with nominally more of a plan but still lacking the players to deliver it.

Put simply, there were likely very few opposing players that Brighton would even have wanted in their team.

And while that does reflect the years of dysfunction that have led Manchester United to this place, it should also be remembered that closing this gap hasn’t been a one-way street. Continuing to grow and improve will be difficult, but at this precise moment in time this #TeamLikeBrighton is quite clearly one that more other clubs should aspire to replicate.