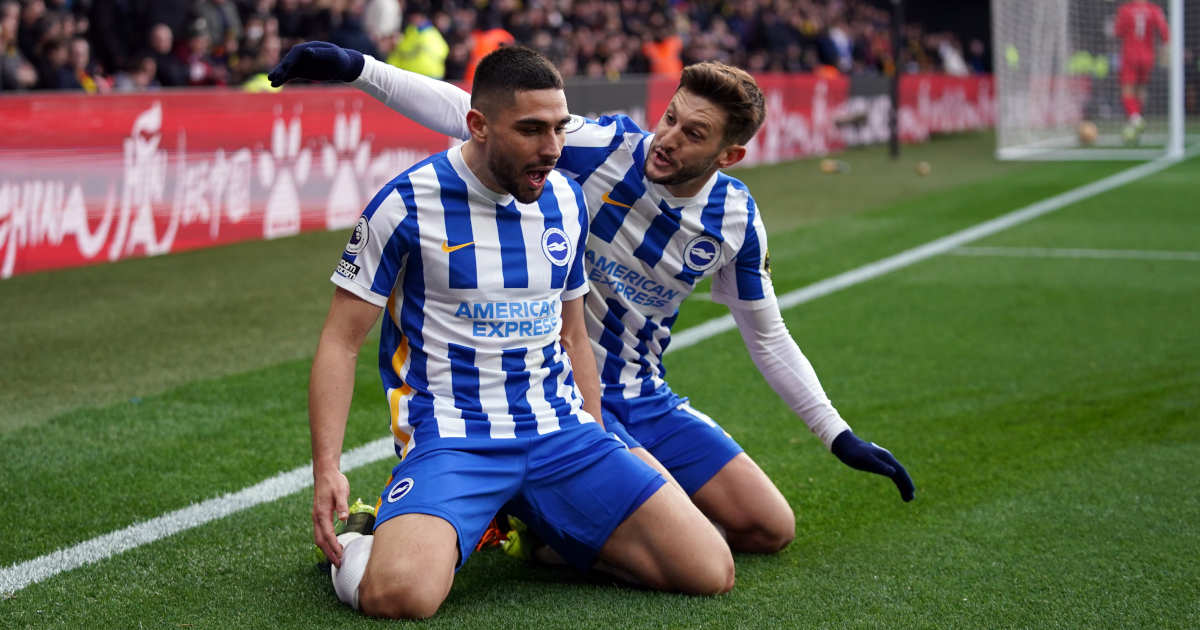 Brighton are within sight of a place in Europe, a significant milestone in the club’s slow and steady progress under Graham Potter.

As Spurs choked and Manchester United tripped over their own shoelaces, Brighton & Hove Albion made light work of brushing aside Watford at Vicarage Road. It was a result that few would have doubted before the match, but Brighton have dropped a lot of points from matches they might have won this season. It had also been a difficult week for the club, with the decision of sporting director Dan Ashworth to leave for Newcastle, where he can undertake a whole new ‘project’ on considerably more money and with infinite Saudi funds to spend on infrastructure and personnel.

Ashworth had been considered key to the future development of Brighton & Hove Albion, and his departure leaves big boots to fill, even though it is being suggested that his gardening leave may be as long as nine months. But the very fact that a club which has been turbo-powered by so much money should, following their signature of defender Dan Burn shortly before the transfer window closed, be making repeated raids on them for players and staff is in itself an indication of how far they’ve come over the last few years, no matter how unwelcome that apparently now permanent close inspection might be. David Weir, who was only promoted to be Ashworth’s assistant in the middle of January, takes over the position on an interim basis.

There are no relegation fears on the south coast. If anything, something approaching the opposite is true. The whispers remain hushed for now, but the possibility of European football coming to Brighton is growing, and with the teams above them dropping points regularly and a long way still to go, even a place in next year’s Champions League can’t quite be completely discounted just yet.

Brighton may be ninth in the Premier League, but they’re only seven points off fourth-placed West Ham, and a win from their next match, away to Manchester United, would put them above Spurs on goal difference and breathing down the necks of Arsenal and Wolves, although Arsenal have games in hand and are, for now, probably the favourites to secure that final Champions League place. But if we consider Brighton rank outsiders for the Champions League place, a Europa League or Europa Conference League place is somewhat less so.

Sure enough, they still don’t have the seasoned game-in-game-out goalscorer (Neal Maupay is at best a scorer of great goals rather a great scorer of goals), but the tap is flowing, after a fashion, and they needed it. They’ve been difficult to beat all season. Only Manchester City, Chelsea and Liverpool have lost fewer matches in the Premier League, but a lot of draws have cost them. If they’d won half of the 12 matches they’ve drawn so this season, they’d be 12 points better off and above West Ham. They’re capable, and the gap may never be this slight again. This feels like a real opportunity for the club to break through another glass ceiling, just as they did by getting promoted into the Premier League in 2017.

But in the economically calcified world of the Premier League, money talks louder than anything else, and the circling of the vultures isn’t likely to end with Ashworth and Burn. The biggest clubs have deigned Yves Bissouma and Tariq Lamptey worthy of their attention, and the tugs of war over their signatures could be amongst the lengthier of the summer.

But what of Graham Potter? Despite a smattering of boos at the end of their goalless draw with Leeds at the end of November, the manager’s stock remains as high as ever among the vast majority of supporters, and there seems little sign that he would wish to join the recent exodus from the club. Some Newcastle supporters may assume that Ashworth’s arrival at Newcastle may give them a better chance of securing Potter’s services. This may be true in a sense, but it obviously doesn’t guarantee him going anywhere either.

The opportunity to break with this cycle comes with the possibility of European football. If that is on offer come the end of the season, then Brighton have a better chance of not losing their best players. Anybody who’s heard Graham Potter speak about football will be fully aware of how well Potter speaks about the game. A combination of the quality of coaching and a shot at European football could be enough to persuade some to give it an extra year.

But the club has also said that it would never stand in the way of those seeking to leave. They came good on that regarding Dan Burn, and they came good on it over Dan Ashworth as well, even though Newcastle are expected to pay heavily to release him from that gardening leave. Business, after all, is business, and it’s hardly as though Newcastle haven’t been leveraging their position enthusiastically recently, either. If Brighton receive offers that they consider acceptable, selling certainly doesn’t have to be seen as the worst thing they could do.

You don’t have to be particularly old to remember Brighton playing on a dilapidated athletics track, surrounded by temporary stands. The club’s development has been plotted over a period of years by their owner, Tony Bloom, whose funding of the construction of The Amex Community Stadium was the jolt needed to fulfil the promise of a club that had been neglected for years. Their rate of progress slowed upon promotion into the Premier League, as was always likely, but this season is an opportunity to resume that upward curve. The very fact that they are even in a position to be disappointed should they come away from Old Trafford without at least a point says something profound about how far they’ve already come.