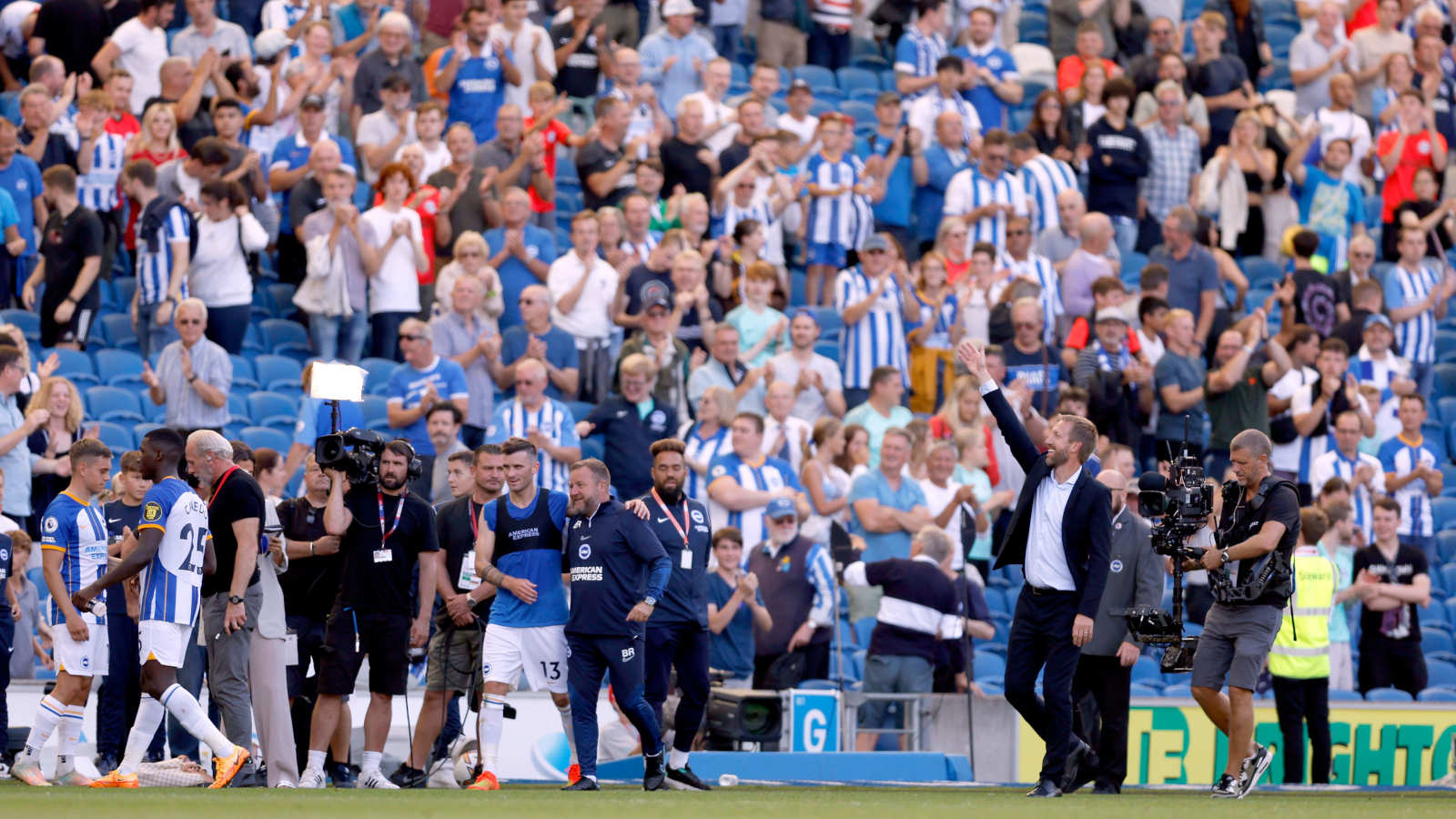 A small gap in the schedule to decide upon a replacement will be cold comfort to Brighton after their manager’s abrupt departure for Chelsea.

In the end, Graham Potter’s parting gift to Brighton & Hove Albion turned out to be a pair of mixed messages. On the one came a Dear John letter for supporters in which he seemed to acknowledge that Brighton fans would be deeply unhappy at his departure. But on the other, either his final act as the manager of the club or his first as the manager of Chelsea was to take much of the rest of their backroom staff too. Five others left within 24 hours of his departure, all headed for Stamford Bridge.

This isn’t just about Graham Potter. It’s also about who he’s taken with him. Assistant manager Billy Reid, coaches Bjorn Hamberg, Bruno Saltor and Ben Roberts, and recruitment analyst Kyle Macaulay have all also left. The loss of Bruno – a cult hero among Brighton supporters from his time there as a player to the extent that murals of him have been painted in Brighton town centre – will particularly smart. Those are a lot of shoes to have to fill, and at fairly short notice.

So where do Brighton go next? This is a club with a reputation for forward planning. This may be how they came to land him as their manager in the first place. But they lost their Director of Football Dan Ashworth to Newcastle’s millions at the start of the year, and now have been filleted of other key backroom staff members by Chelsea’s promise of a lot of money, and Brighton fans must wonder how the club can possibly cope.

Because what has happened to Brighton over the last few days and weeks has been an example of football’s food chain at its savage best or worst, according to taste. The club had already lost two of their best players during the summer in Marc Cucurella and Yves Bissouma. At least, they might have felt, the closure of the transfer window offered a degree of security. But there is no managerial transfer window, so when Chelsea came a-plundering, there was little they could do.

And of course, one of the less talked-about effects of this particular form of trickle-down economics is that there will be further ramifications. Brighton have little alternative now but to do as Chelsea did to them to somebody else (unless they have high-minded ideals of only speaking to managers who are out of work, which seems unlikely), and so down through football’s eco-system others will likely be inconvenienced by Chelsea’s internal dysfunction too.

Thinking outside the box as ever, the current favourite to succeed him is Kjetil Knutsen, the manager of Norwegian side Bodø/Glimt. Knutsen took his team to their first ever Norwegian league title in 2020, repeated it in 2021, and last season they beat Roma 6-1 in a Europa Conference League group game. Considering that Potter arrived at Brighton following eight years in Sweden with Ostersunds FK (and one with Swansea), the temptation to reach for parallels is strong.

For now, the running is pretty open. Steve Cooper is an obviously tempting proposition, but it seems unlikely that he could easily be prised from Nottingham Forest after the number of players arriving there during the summer. Brendan Rodgers is a big name but perhaps one whose fortunes are starting to wane, Ange Postecoglou of Celtic excited some comment which now seems to be cooling, and the likelihood of Thomas Frank going from Brentford seems extremely slight, considering the previous between the club’s owner Matthew Benham and Brighton’s Tony Bloom. Nathan Jones of Luton Town fits the bill of being a young(ish) coach who’s worked wonders n the EFL, but his spell at Stoke between two with Luton didn’t work out well for him.

Whatever happens, they do at least have the luxury of time to make their decision, a result of two quirks of fate. A derby match against Crystal Palace would have been their first post-Potter home match, but this was postponed just last week on police advice because of proposed train strike action.

The death of the Queen has meant that this strike action has now been cancelled, but this match won’t be re-re-scheduled for this date, and with an international break following this weekend, Brighton are now into a period of four consecutive free weekends and are without a game until the start of October. It remains to be seen whether they act quickly to give a new coach time to get to know his squad, or whether they take that time to approach their initial decision-making process with care.

It should go without saying that Brighton & Hove Albion have been through worse before. This is, after all, a club that was unceremoniously evicted from its home and sentenced to two years in exile at Gillingham, a period which almost brought about its extinction and which only ended with a return to the broadly unsuitable Withdean Stadium.

Just to be in the Premier League in the first place is an incredible achievement, and it is worth remembering that, for all that Graham Potter did for the club during his time there, he played no role whatsoever in getting them there in the first place. That Brighton supporters should be angry at the way in which he left is completely understandable, but no one person – or even six people – is bigger than the club itself.

The club will, of course, be best off putting Potter behind them and getting on with their future. After all, it wasn’t him out there on the pitch during matches, and it’s hardly as though the players will suddenly have forgotten all that they learned under him. If there is a club at which the supporters can trust that the ownership will take a balanced, thoughtful and imaginative view of who his replacement will be, it’s this one.

Brighton may have been comprehensively shown where they stand in football’s food chain, but in a season that was already due to exert unusual pressures, perhaps the new manager will be able to upset that particular applecart further. The players have already demonstrated their ability, and a fuel of righteousness could even have a perversely beneficial effect upon them. The Brighton players’ job is now to take whatever anger they have been feeling since this abrupt departure and turn it into something productive.