Home F365 Says Why has the Premier League got a sudden goal fetish?

The record for most goals in a full Premier League season is 2.82 per game. We are currently on 3.86. 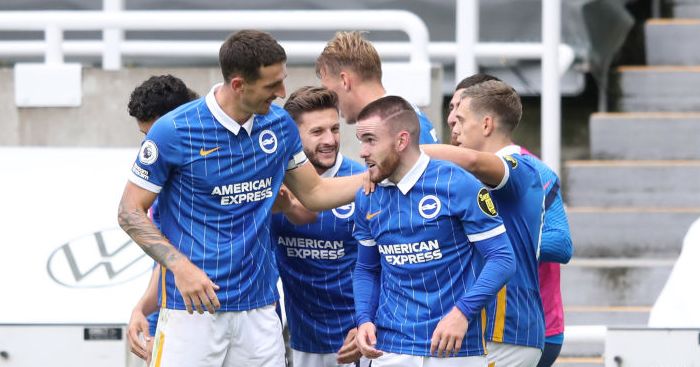 The phrase Gary Neville used and some co-opted thereafter until Project Restart offered a far clunkier and mechanical alternative in Project Restart was “festival of football”. He hoped for “something spectacular” to “bring some hope and joy to the country when we finally come out of this crisis”.

Six months later, the nation still finds itself gripped by the virus but increasingly susceptible to something far more contagious: the goal bug.

As Neal Maupay put the final touches on his admirable impression of creator and finisher Harry Kane on Sunday – the dust barely having settled from the Tottenham striker’s own remarkable performance – it was time to take stock of a breathless start to a season in which fatigue was supposed to dominate.

Fourteen games played, 54 goals scored at an average of 3.86 per match. The Premier League record for a full season was established in 2018/19: 2.82 goals a game. George Graham must be beside himself.

We’re currently on 31 goals from six games, so 12 needed from the last four to equal the record. pic.twitter.com/cx2kq1Aloa

It was a shame Maupay could not add to his two strikes in seven minutes against Newcastle, who afforded him and Brighton more than enough opportunities. Had he scored once more this embryonic campaign would already boast more hat-tricks than the entirety of 2006/07, with less than a week and a half worth of matches played.

As it was, Aaron Connolly’s fine late finish confirmed Brighton as the fifth side to have won a Premier League game by three goals this month. A quarter of the entire division has already laid waste to an opponent and no-one has played more than twice. Hell, the most exciting side of all haven’t even had their first fixture. Just wait until Sean Dyche gets in on this nonsense.

This homage to those eminently tweetable fixtures of Boxing Day 1963 cannot possibly be maintained yet it has made for some incredible entertainment. Goals do not automatically equate to fun – this year’s FA Cup final laughed in the uncultured face of 2019’s – but they certainly do help.

Perhaps the lack of supporters in stadia should be taken into account. The lack of pressure, of fans lambasting every misplaced pass or wayward shot, has been an undoubted factor. But some teams seem to need that motivation. Newcastle, Fulham, West Brom, Southampton, Manchester United and even Brighton themselves have all shipped three goals at home, visiting teams free of the shackles of an intimidating home atmosphere.

Brighton encapsulate possibly the most pertinent reason: the shift towards every team having a defined style and approach. The standard of coaching has improved considerably even in the past decade or so to such an extent that promoted sides have a set blueprint they refuse to divert from, with mid-table teams chipping away at the glass ceiling through meticulous planning, coherent decision-making and development built on solid foundations. Wolves and Sheffield United came up in successive seasons to challenge the status quo not adhere to it.

Graham Potter is an excellent manager who has long justified Brighton’s oft-criticsed choice to part with Chris Hughton. Their last six meetings with Newcastle produced four draws and a pair of 1-0 victories for the Seagulls. This is the sort of team they are interchangeable with in pre-season predictions, whom they share supposed level footing with. But while Newcastle walk in treacle, any sign of discernible progress being stymied by hierarchical issues, Brighton seem well-placed to reap the rewards of their unity and steady ambition.

They have two players no older than 22 who might already command fees of £30m. Ben White has started the season impressively but Tariq Lamptey has been sensational. Clever recruitment will always beat lavish investment.

Yet the Premier League is now blessed with ridiculous talent at almost every club. It trickles down from the obvious quality at Liverpool, Manchester City and the rest of the established elite to players in the recent mid-table like James Rodriguez, all the way to Grady Diangana and Matheus Pereira in the relegation battle.

That, coupled with less stellar defences, has made for some enthralling matches already. The sample size is relatively tiny and this pace will eventually drop as the adrenaline wears off but the festival will be fun while it lasts.