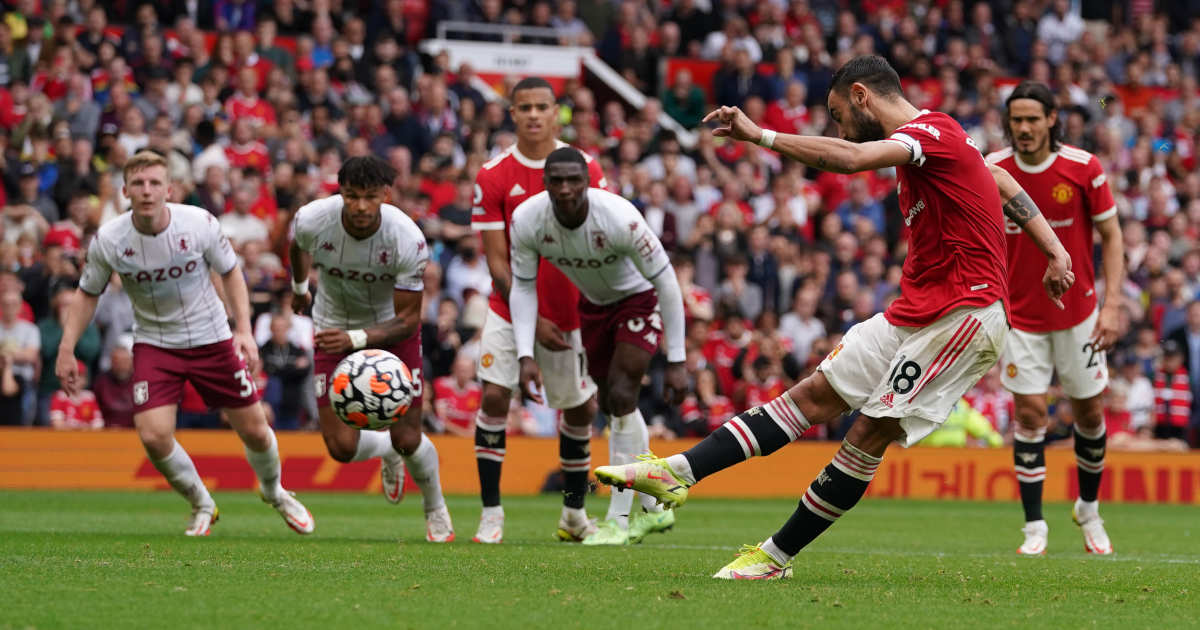 The Bruno Fernandes penalty miss cost Manchester United a point, and it wasn’t the first time that a United player has apologised this season.

The closing stages of the Premier League match between Manchester United and Aston Villa could scarcely have been more dramatic. With a couple of minutes to play Villa snatched the lead, only for United to get a penalty kick themselves in stoppage-time. It just so happens that Manchester United have two of the best penalty-takers on the planet and that both were on the pitch at the same time, but the ball ended up with Bruno Fernandes rather than Cristiano Ronaldo and Fernandes blasted his shot high over the Stretford End crossbar.

Ole Gunnar Solskjaer knew who to blame after the match, of course. Yet again, it was the fault of those dastardly match officials for not ruling out Villa’s goal for a foul, an offside, or some form of infringement as Kortney Hause headed in unmarked to snatch the win with two minutes to play. Heaven forfend that a Premier League manager might take some responsibility for their own team’s shortcomings, for once. But in the dust storm of unhappiness that followed United’s second episode of firing blanks in a row, Bruno Fernandes apologised publicly on social media for having missed that late penalty kick.

There’s a lot to unpack here. First of all, the obvious. The figures vary slightly depending on which study you’re looking at, but on average around 75% of penalties are converted. Throughout his entire career so far, Bruno Fernandes has taken 46 penalty kicks and has missed four of them, a hit rate of 91.3%. For Manchester United, that record is now 23 taken and two missed, also a hit rate of 91.3%. To put it another way, Bruno Fernandes’ penalty kick success rate, both for Manchester United and throughout his career as a whole, is much better than football’s average.

But sometimes this sort of thing just happens, even to the best of players, and it could hardly be said that a stoppage-time penalty kick to salvage a draw from a league match isn’t an almost ridiculously high level of pressure for anybody, with the knowledge that 75,000 pairs of eyeballs are on your back inside the stadium with millions more watching live around the world. That players manage the pressure placed upon them as well as they do is the wonder, not the fact that they occasionally miss, or that the goalkeeper – also likely to be one of the best in the world at his job – might be able to save it. It isn’t a big deal, should a player occasionally shank a penalty kick off-target, and neither should it be.

Bruno Fernandes isn’t the only Manchester United player to have apologised for making a mistake on the pitch this season, either. After his wayward pass set up the decisive goal against Young Boys in the Champions League two weeks ago, Jesse Lingard felt the need to tell the world of his shame as well. In both cases these apologies have raised more questions than they could ever have hoped to answer.

Is this going to happen now every time a Manchester United player makes a mistake? Can those who DEMAND contrition be satisfied by having to wait until a match’s end, or should players keep an iPhone tucked down the back of their shin pads in case they lump the ball into Row Z when they intended a silky smooth pass, so that they can apologise in real time? Will Cristiano Ronaldo be expected to join in this orgy of contrition? After all, Ronaldo failed to land a shot on target against Aston Villa, but there have been no signs of any public statements of remorse from him since Saturday. And if Ronaldo failing to hit the target with four shots isn’t sufficient grounds for a public apology (spoiler alert: it isn’t), then where should that particular line be drawn?

The current fashion for self-flagellation isn’t solely limited to Manchester United, either. At the end of last season, Sergio Aguero apologised to Manchester City supporters after mis-judging a Panenka against Chelsea in the Premier League, while in the aftermath of England’s defeat to Italy in the final of Euro 2020 we could hardly move for apologies from the players who missed their kicks in the penalty shootout. In the case of the England players, it’s understandable. England matches are by their very nature representative in a way that club matches cannot be; the psychology of playing ‘for your country’ is different to playing ‘for a club’. But when this spills over into club football, it starts to look a little, well, performative.

So what is the overall aim here? Are the players themselves taking control of the reach that they have on social media to show a more human side? Are these apologies part of a broader social strategy on the part of their clubs? It’s difficult to say for sure, but this whole conundrum does reflect a game which lionises its players and treats them as demigods while things are going well, before launching torrents of abuse at them whenever they make a mistake.

And this is where there may be a risk to all this contrition. The expectations placed upon professional footballers have been ballooning for years, as have the levels of abuse when they make an error. Publicly sharing apologies for easily-made mistakes on the pitch will mean little either way to the level-headed among us, but it only seems likely to embolden the already entitled, and it seems as likely as not that the most likely long-term effect of this will be for “WHERE’S MY APOLOGY?” to be added to the litany of codswallop that players already receive on social media, whether they like it or not. Accidents happen, and increasingly fans need to remember that footballers are human beings and that to err is human.