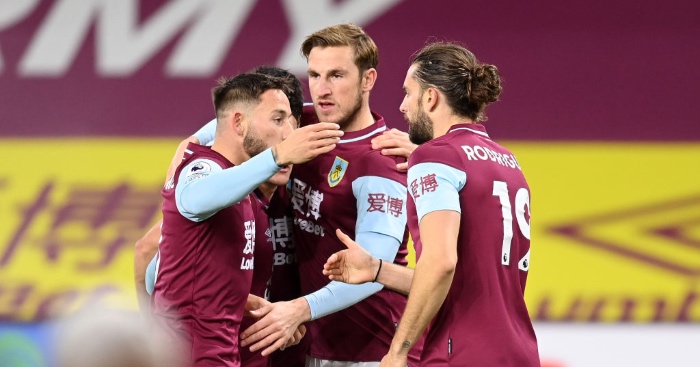 It was a story of two sets of strikers at Turf Moor on Monday. Burnley’s bullied while Crystal Palace’s were familiarly frustrating, as Sean Dyche’s side won their first Premier League game of the season.

Jay Rodriguez is often lumped in with the other bruisers, but he offers different qualities to both Ashley Barnes – who he replaced on Monday – and Chris Wood, who enjoyed and thrived off the company of his more technically gifted strike partner. The two combined to send Rodriguez through early on, and again moments later as Wood finally scored Burnley’s first home goal of the season.

They were fortunate in that it was a horrendous attempted clearance from Cheikhou Kouyate, who was being hailed to the hilt for his composure by the commentators moments before. It was as though he’d been surprised by a falling frying pan in a slapstick children’s romp as the ball hit his head rather than him heading it clear. Rodriguez reacted quickest, knocking it cleverly on for Wood to easily convert.

And their dominance of the Crystal Palace centre-backs continued. Kouyate looked very much like a midfielder playing in defence and Scott Dann was feeling every one of his 33 years: they were tormented like civil servants under a Tory minister.

But unreserved apologies were not forthcoming and Priti and Patel continued to put the mockers on the Crystal Palace defence, with the unease spreading to Vicente Guaita, who was not enjoying the barrage of support from McNeil and the backbenchers.

A disorganised defence is not a criticism typically aimed at Palace under Roy Hodgson, whereas their lack of potency in attack without Wilfried Zaha – who was ruled out having tested positive for coronavirus – very much is. Eberechi Eze is considered to be the vaccine to that particular Palace ail and he does have the enigmatic quality to make things happen. Not to the same degree as Zaha – he’s probably about 70% as effective right now – but the way in which opposition teams panic and part when he’s in possession suggests that could rise to 90% come spring.

He was invariably involved in the good Palace moments: turning and beating Matt Lowton when given the chance; threading through balls for Michy Batshuayi and the midfielders. And there were plenty of good moments, in the second half in particular. But it was Palace’s other shortcoming – their lack of a goalscorer – that on this occasion proved to be more significant. It’s another problem normally deafened by Zaha’s presence – he’s scored five of their 12 goals this season.

Batshuayi flatters to deceive. The good stuff – some excellent hold-up play, driving forays and neat passes – is quickly lost through the growing frustration amid mistimed runs, poor decision-making and carelessness.

He spurned Palace’s best chance as McNeil played a blind pass to him on the edge of the box. But instead of manoeuvring the ball into a favourable position or making any aspect of the finish unpredictable – a dink or a drop of the shoulder, perhaps – he hit it straight at the onrushing Nick Pope.

And the Burnley goalkeeper also superbly denied Christian Benteke’s poked effort late on, before the Belgian striker could and should have done better with a clear chance even later.

He and the other Crystal Palace strikers (Jordan Ayew also apparently played 77 minutes) were wasteful and devoid of the confidence Rodriguez and Wood oozed in a partnership that could be Burnley’s saving grace in what will still be a very long season.