Chris Wilder thinks Sheffield United can learn a lot from Burnley and we agree... 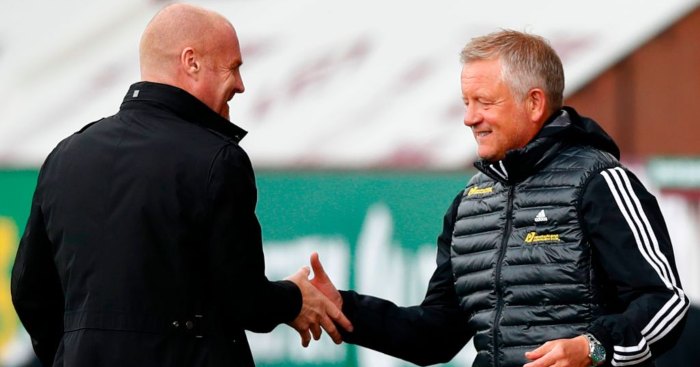 Burnley and Sheffield United keep chasing a chance of playing in Europe next season after John Egan scored a second-half equaliser to earn the Blades a share of the spoils in the Premier League on Sunday. Ahead of the fixture, Chris Wilder was keen to pour praise on his opposite number Sean Dyche with the Blades boss admitting the Clarets are the “most talked about club in our staff room”.

Of course Wilder meant that in a good way with his Sheff Utd side displaying many of the same qualities that Dyche’s team possess. The game was played at a frantic pace with both outfits seemingly taking great pleasure in work their arses off. It would be unfair to suggest that Burnley and United have managed to get into the top half of the Premier League table on effort alone, the quality of play from both sides was there for all to see, especially from the visitors.

Both teams started on the front foot with Oli McBurnie forcing a save from Tom Pope inside the first two minutes before Matej Vydra missed a glorious chance to make it 1-0 on nine minutes, when he side-footed it wide from Erik Pieters’ through ball. The Blades looked the more cohesive unit in the first-half with several efforts narrowly wasted by Wilder’s men.

Burnley struggled to get into the Blades penalty area before the break but it was the Clarets who made the breakthrough on 42 minutes. A free-kick from Dwight McNeil was nodded on and James Tarkowski lost his marker to slide home at the back post. United were unfortunate to go into the interval behind but it was a lovely finish from the Burnley defender.

Victory for Dyche and his team would’ve seen them leapfrog the Blades into eighth and they looked on course for a third 1-0 on the spin before Egan struck on 80 minutes. A short corner was flicked on by Billy Sharp and Egan was there to fire a superb half volley into the net and give the Blades a point and keep Burnley at arm’s length. Just two points separate United and ninth-placed Burnley with the possibility that eighth position could get you a place in the Europa League this campaign.

Burnley could have mixed feelings about the possibility of another season in Europe with their first European adventure for 51 years turning into a Premier League relegation battle in 2018/19. It was a huge achievement for the club and The Princess Royal pub near Turf Moor was re-named ‘The Royal Dyche’ in homage to their leader. Two years on and Dyche could guide his troops on another European tour but this time with his own future reportedly up in the air. An apparent boardroom disagreement at Turf Moor has led to speculation that Dyche could leave despite their good performance in the Premier League.

Before the match on Sunday, Wilder paid tribute to Dyche with the Sheff Utd boss claiming that Burnley should be questioning themselves and not their manager. “I have said all along I think Burnley are the most talked about football club in our football club, £120million, £120million, £120million, another one and another one, that is what they have done, the consistency,” Wilder said. “Brilliant manager, gets the best out of his team, they are a great example for my football club and my players on how to do it. If I am sat here in four or five years time a Premier League manager like Sean is I would be absolutely delighted.

“Absolute nonsense, complete nonsense in terms of anyone questioning what that man does for that football club. That is an ignorant, ridiculous opinion. Complete nonsense. I don’t get it. Have Burnley gone as far as they can with Sean Dyche or is it the other way around? I think it’s the other way around and if I was him I would be looking at it like that. If anyone asked the question after what Sean’s done for Burnley I would be saying has that football club done enough for the manager after what he has done for them.”

Sheffield United may be above Burnley in the table in their first season back in the Premier League but Wilder reckons there is loads that the Blades can learn from Dyche and the Clarets. United bounced back from two defeats in a row to collect maximum points in a hugely impressive 3-1 win against Tottenham in midweek and their first-half display here in will have been encouraging for their boss.

The victory over Spurs officially confirmed the Blades’ participation in the Premier League next campaign and the next step will be to stay in the division every year and build from there. Their tough run-in suggests they may just miss out – but with improving performances, Europe remains a real possibility for the Blades. Missing out, though, could also be a blessing in disguise, just ask Burnley…