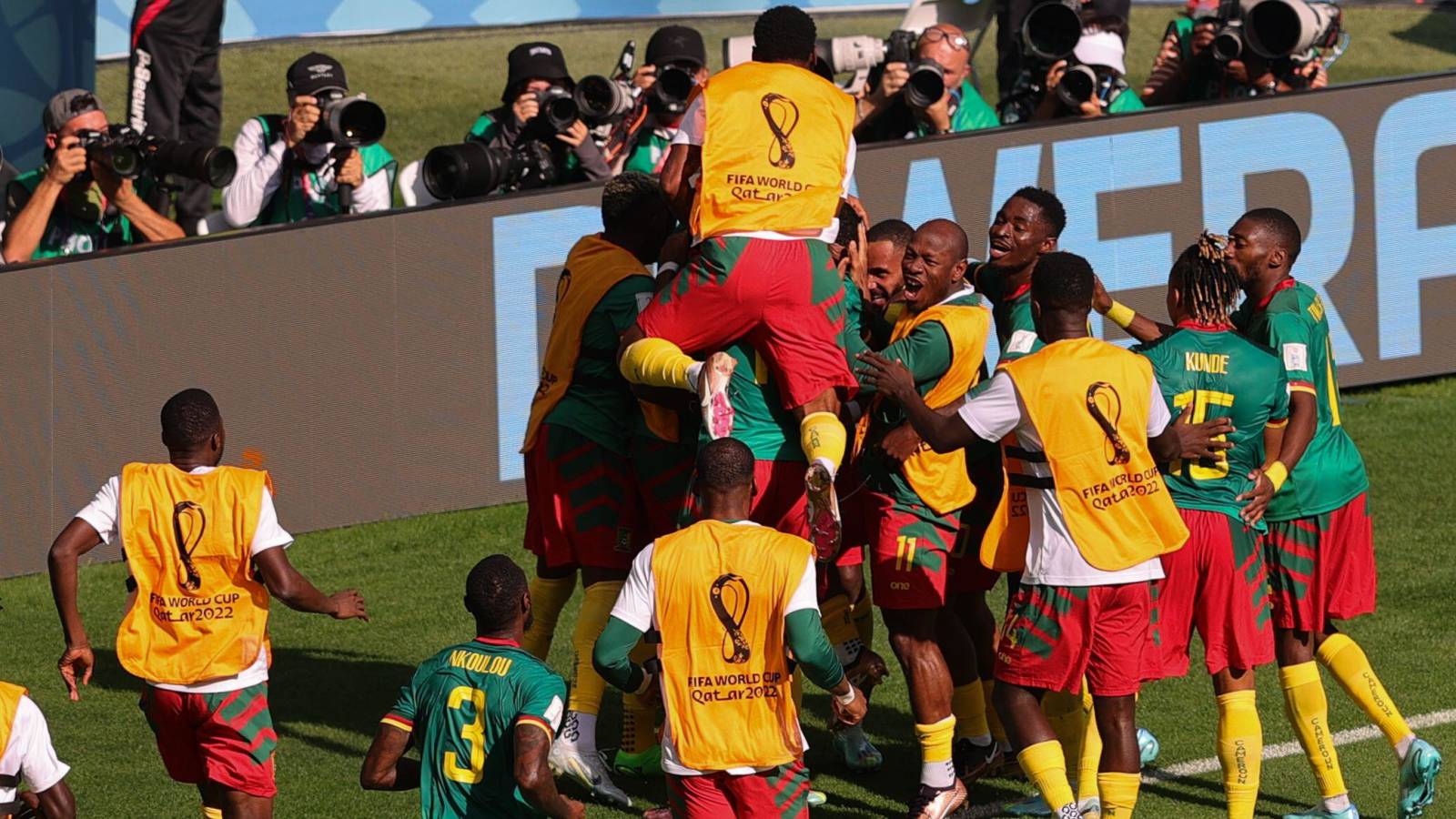 This was the precise game we’d been desperately waiting for but also dreading. The game that brings such irrepressible and compelling World Cup energy that it overpowers everything else.

You can hate this World Cup and everything it stands for and represents, but you absolutely cannot hate a game of football that at 10am on a chilly Monday morning contains this level of gloriously and perfectly World Cup nonsense. There are games of football in pre-tournament Nike adverts less silly and fun.

As the last of the decadent morning kick-offs before the tournament goes that bit more drably serious with synchronised kick-offs for the final group games, this always had potential. That potential was ramped up further before a ball had been kicked by the extremely World Cup Bingo news that Cameroon’s goalkeeper Andre Onana had been left out after a disagreement with coach Rigobert Song. Every one of those words just feels powerfully and indelibly correct.

That absolutely nobody wanted the final whistle was also just a beautiful thing. Nobody watching the game wanted it to end and, perhaps most perfectly of all, a draw is a result that means both teams will probably bow out at the group stage.

There will be obvious disappointment from both countries, but we’d urge them to look at the bigger picture. Let’s be real, neither Cameroon nor Serbia are particularly likely to go on and win this tournament for reasons that were pretty spectacularly displayed here. What they have now is one of the great group games, one that’s potency is only increased if both teams go out. It has a purity that can’t be sullied by any brave but laboured last-16 exit to Portugal or whatever.

We thought we might be on to a good thing with the kick-off and the goalkeeper shenanigans and were absolutely certain of it after Cameroon took a first half that was magnificently and absurdly against the run of play yet only a taster of what was to come. It wasn’t the goal that told us greatness was afoot, though. It was the sight of Cameroon’s entire bench of substitutes charging the pitch in hi-vis tabarded ecstasy to celebrate a 29th-minute goal in a manner more commonly associated with 123rd-minute semi-final winners. Absolutely glorious it was, as was Serbia’s double-perfect response in scoring two goals themselves in the injury time generated by Cameroon’s 25-man (we assume Onana wasn’t there…) celebrations and then getting all their subs involved in the delirium.

It was all such great fun that it’s surely only a matter of hours until a FIFA edict is handed down demanding a clamping down on sub-based overexcitement. We’re playing loads of injury time now, just let everyone have their fun. Scoring goals is meant to be fun.

In the second half, Serbia appeared to have wrapped the game up with a third goal that was both mesmerisingly brilliant and also awful, making it at the time the most on-brand goal of the game, a record it would hold for a good 10 minutes.

Cameroon’s defenders were all in attendance, but all seemed to suffer a brief yet total and simultaneous malfunction that allowed the Serbian front four to pass the ball around at will in order to finally generate the chance for Aleksandar Mitrovic to get his World Cup goal. Alas his deal with the devil that got him on the scoresheet appeared to require him to miss a whole load of absolute sitters before and after the goal.

Whether that deal also explains Serbia’s approach to defending in the 40 minutes that followed is unclear, but would explain an awful lot.

Serbia’s response to going a goal down so harshly had been exemplary. No panic, no fuss, just a continuation of the eye-catchingly fast yet precise attacking football that had brought them everything but a goal before Cameroon’s opener and had by the hour mark seemed to have secured both three points and perhaps a renewed ‘dark horse’ status for a side that in a World Cup where everyone bar one or two teams looks quite flawed in some way or another seemed to have an awful lot to recommend it.

Then they decided to try and protect their two-goal lead by playing a wildly high line but crucially not tell Nikola Milenkovic about it. Twice he was deeper than his colleagues to play Cameroon catastrophically onside, albeit the first of those requiring the intervention of semi-automated weird-graphics VAR to overrule one of those tentative offside flags you see every now and then where an uncertain official apparently looks at where the moving parts all end up and concludes that the physics of it all simply demand that the striker must have been offside.

As the list of ‘people who thought Vincent Aboubakar was offside’ seemingly included Vincent Aboubakar, it wouldn’t do to be too critical of the on-field officials, but we must on this occasion give great and heartfelt thanks to VAR for ensuring a sensationally silly goal took its place in history. The sheer height and angle Aboubakar got on his scooped-lob-chip finish was outrageous, and only he would be able to tell you whether he would have attempted it had he not believed he was offside at the time.

If the tightness of that call meant Serbia could be slightly spared criticism, repeating the exact mistake only far more obviously two minutes later really was beyond the pale. Cameroon were ludicrously, deliriously level within 13 minutes of going two goals down and the only surprise was that this was the end of the morning’s goals.

It was not for the lack of trying. It would be obvious and correct to say that Cameroon’s desire to push as hard as they did for a winner was born of simple practical necessity. A point that requires them to win their final group game against tournament favourites Brazil probably won’t do them much good, but three points would have moved the needle. But it seems equally true that by this point things were pretty much just so far out of hand that there was no bringing this game back to anything approaching normality.

Certainly a wide-eyed and baffled Serbia couldn’t do it. A point is less terminal for them, albeit a must-win game against Switzerland isn’t straightforward, but the all-or-nothing nature of what Cameroon were doing by this point left Serbia with little choice really but to go along with it. Either side could have scored fourth, fifth and sixth goals in a madcap last 15 minutes.

But nobody could make it happen to leave us with a perfectly pointless World Cup classic that left us running round the house in a hi-vis tabard.