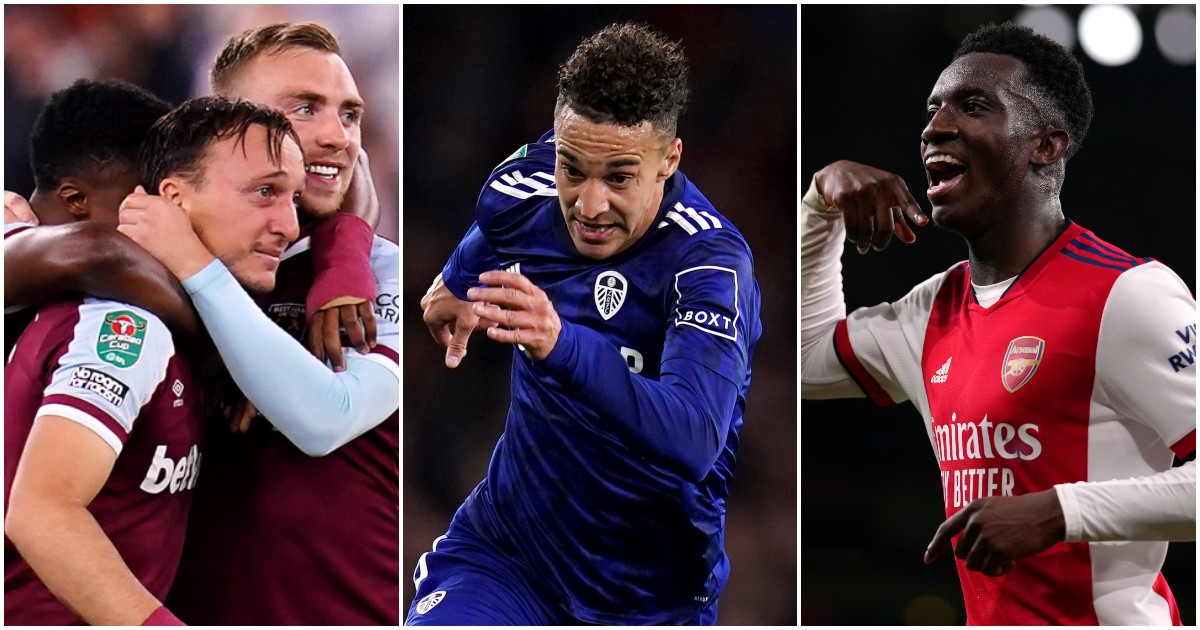 West Ham, winning at Monopoly
One thousand, eight hundred and twenty-seven days – that’s how long it had been since Manchester City were defeated in the EFL Cup. That was until West Ham showed up and ensured there would be no fifth straight Carabao trophy heading the way of Pep Guardiola and friends. Having frustrated their opponents for 90 minutes, West Ham were deserved winners in the shoot-out, each Hammer keeping their respective nerve after Phil Foden had missed the opening spot kick for his side.

Said Benrahma was the ultimate match-winner, but this was a result borne out of West Ham players yet again performing incredibly to a man. There can’t be many squads, many fanbases, many clubs having a better time of it than the Hammers right now. They are smashing Europe, they are smashing the Premier League and now they are into the last eight of the EFL Cup. Silverware would make this by far David Moyes’ best stint as a manager, and cement his place in the annals of great coaches to have graced the claret and blue corners of east London.

Mark Noble
Having been brought on to score a last-minute penalty against Manchester United in the Premier League and then failing to do so, the entirety of the London Stadium held its breath as Mark Noble stepped up to rectify that error. His farewell season before retirement may be short in time spent on the pitch, but there is ample opportunity to make more memories with the chances he gets as West Ham are enjoying their most glorious period in his career-long stay with the club.

The first penalty was also the most confident, assured and emphatic of the bunch and set West Ham on their way to the last eight in style. Here’s to a few more moments like that before May is out and Noble is done.

Ivan Toney
Brentford may be suffering an injury crisis and a half right now, but for as long as they have Ivan Toney, they will be fine. The talismanic striker proved his worth once more as Brentford made fewer changes to their squad than most this midweek, simply by virtue of not having the requisite players available to swap around.

Even then, there aren’t many clubs who would elect to start their best player and top scorer against Championship opposition for fear of injury or suspension, but this Brentford side has been built on calculated risks paying off with added interest. An assist and a goal knocked Stoke out two rounds earlier than last season and ensured Brentford a place in the last eight while barely flickering a collective eyelid across the country. Their progress is astounding but should never be normalised. The same goes for Mr Toney.

The Liverpool back-ups
Takumi Minamino and Divock Origi will never be first-choice forwards for Jurgen Klopp’s side, but as far as rotation options go for cup games against Championship opposition, the reserves showed they are more than capable of completing this necessary job.

Having ridden their luck in the first half to not be behind at Preston – whose squad was seemingly full of Liverpool fans who would give anything to have the back-up positions that their opposition possessed – Minamino and Origi both provided smart finishes from minimal distance to maximum effect for Liverpool as they progressed to the last eight. With Manchester City’s Carabao crown having slipped, Liverpool know it is their competition to lose. The big guns may be needed from hereon in, but Minamino and Origi made it possible.

Eddie Nketiah
After an awesome touch to lob goalkeeper Illan Meslier, Arsenal forward Eddie Nketiah sought to make the finish as difficult as possible for himself against his former club. In some ways, it served as a reminder of the 22-year-old’s half a season with Leeds United, where he was regularly cited as being one of the most promising and exciting players in the country by manager Marcelo Bielsa while rarely getting the chance to actually prove it.

Nketiah scored more league goals (3) than he made league starts (2) in his time at Elland Road, but current manager Mikel Arteta spoke of the England youth international’s bright future with the Gunners in the aftermath of his goalscoring night. The touch to take the ball past the keeper was sublime, the finish was slightly more ridiculous, but how Leeds could have done with some of either on yet another frustrating night in front of goal for El Loco’s men.

Lee Burge
He may be Sunderland’s second-choice shot-stopper, but there are few better in the entire country when it comes to saving penalties. Lee Burge’s demotion below Thorben Hoffmann has been largely deserved in the league, but when it mattered in the cup, the former Coventry City keeper delivered the goods by saving one and conceding just one of four QPR penalties put his way.

The 28-year-old has saved eight penalties in his career and his presence between the sticks in the shootout ensured a spot in the quarter finals for League One highflyers Sunderland. After so many years of misery, the Black Cats’ fortunes appear to be on the up, with cheer to be had on multiple fronts.

Hakim Ziyech
His impact in the minutiae of Chelsea’s clash with Southampton was minimal, but when it mattered, Ziyech made his chance count. With a goalless contest approaching half-time, his corner provided the perfect delivery for Kai Havertz to head home a Chelsea lead.

Having fallen further down the Stamford Bridge pecking order this season, providing a game-changing moment against Premier League opposition was a good way to showcase just why Chelsea bought Ziyech to west London in the first place. He will be hoping to add to his one top-flight start this campaign in due course.

Ben Chilwell
Show me a player who has turned around his fortunes quite so dramatically and wonderfully as Chelsea and England left-back Ben Chilwell and I’ll show you a liar. Having failed to play any part in Chelsea’s first six league matches this season, the England defender has scored three in three since coming into the side and opened up his England account during that run, too.

At any point before this, he would not have been expected to be anywhere near the first five penalty takers in a shoot-out, but confidence is key, and there is no man in a more confident mood than Chilwell, who dispatched his spot kick with ease as Chelsea took their place in the next round. Everything Ben Chilwell touches turns to goals at the minute.

Rodrigo
To give Rodrigo his dues, his time at Leeds has largely been spent playing second fiddle to first-choice striker Patrick Bamford to such an extent that he’s had to try and reinvent himself as a number 10 or extra midfielder in Marcelo Bielsa’s enigmatic setup. Against Arsenal, the Spain forward was given a rare chance to impress up top in the classic number nine position and barely made a tangible impact on the affair, much like many of his teammates.

Having finished last season in fine form with four goals in as many games to conclude his debut season in west Yorkshire, the former Valencia forward has returned to the Rodrigo of that first two-thirds of last season. The hero against Wolves – Joe Gelhardt – may soon be taking over as first reserve for the injured Bamford, if he hasn’t already.

Burnley
To suffer defeat at home to Tottenham in the Carabao Cup last 16 does not scream immediate losers, except in the literal sense. But in playing a largely strong team against a Spurs side low on confidence and on a run of consecutive defeats, the chance of injecting some excitement into Turf Moor was there for the taking.

It’s not so much that the Clarets lost, but that they hardly looked like progressing at any point. There may be bigger fish to fry with this smaller squad in ensuring Premier League safety, but how a cup run could have helped bring some joy to this corner of Lancashire and provide a boost to everyone connected to the club. That they never even looked like getting out of second gear spoke volumes about the priorities of the competition; perhaps those priorities are somewhat misplaced.

Harry Souttar
Having deservedly been linked with a plethora of Premier League clubs this week, the sky appears the limit for Harry Souttar right now. But there is a difference between dominating Championship frontlines and succumbing to top-flight ones when fees of £25million are being bandied about.

If the match against Brentford could be considered an audition for what’s to come when he does get that move, then Wednesday night was a case of being told to break a leg and fluffing his lines. A tough night for the Australia defender who was poor for both of Brentford’s goals, and will be looking for the solace of second-tier strikers to restore his confidence again in upcoming weeks.

Enock Mwepu
From hero to zero: youngster Enock Mwepu opened up his Brighton account in style to take the match with Leicester City to penalties, only to see his spot kick saved by Foxes shot-stopper Danny Ward, who himself has a penchant when it comes to emerging the hero in penalty shoot-outs. For Mwepu, it’s a welcome to the school of tough knocks that is English football, but proof that he has the qualities needed to make an impact. Now it is up to him to prove he has the mental quality to come back from this setback.