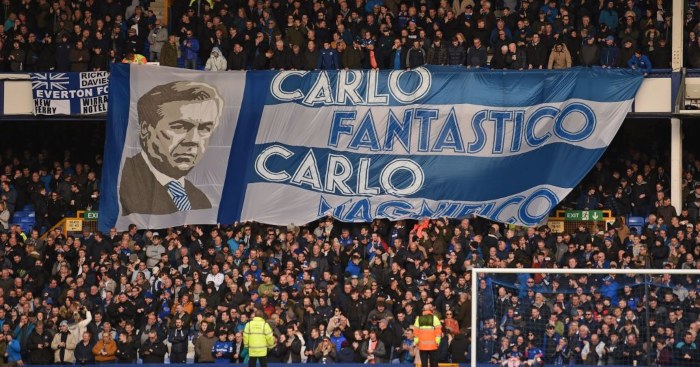 Everton’s 3-1 win at home to Crystal Palace saw them leapfrog Manchester United into seventh, moving them to within five points of fourth place and a Champions League spot.

Carlo Ancelotti now has five wins in eight Premier League games since taking over at Everton, and has only lost once in the competition, to reigning champions Manchester City.

Even being spoken about as in the race for European qualification seemed impossible for Everton following a miserable run of results from late August to early December, with the rot only stopping once Duncan Ferguson took over as caretaker manager following the sacking of Marco Silva.

Ancelotti said the possibility of reaching the Champions League places is not on his mind, but when he mentioned Chelsea in his pre-match press conference ahead of this game, it revealed he has at least one eye, or one eyebrow, on fourth.

“We are not thinking about [making the Champions League],” said the Italian.

“Of course to play in the Europa League would be a fantastic result for us for the next season, and this is the target at this moment because Chelsea is too far [away].

Of today’s starting lineup Morgan Schneiderlin has a handful of appearances in the competition with Manchester United, while Lucas Digne was a regular in the competition for Lille, Paris Saint-Germain, Roma, and Barcelona before moving to Everton.

Theo Walcott dined at Europe’s top table with Arsenal, while Yerry Mina has experience in the South American equivalent, the Copa Libertadores with Palmeiras and Santa Fe, winning a Copa Sudamericana (Europa League equivalent) with the latter in 2015.

Bernard was a Copa Libertadores winner with a Ronaldinho-inspired Atlético Mineiro side in 2013, and appeared regularly in the Champions League for Shakhtar Donetsk.

This makes Mina and Bernard the only players in today’s Everton squad to have a winner’s medal from continental competition, and it was the 27-year-old wide playmaker who provided a moment of quality in the drab early stages of this lunchtime kick-off to open the scoring for the home side.

The cross came over from the right following some neat play by Walcott. Dominic Calvert-Lewin distracted James Tomkins with a towering leap and Bernard’s volley was perfectly controlled.

The Brazilian will want a return to continental action as much as anyone, as a rise in profile could see him back in the picture for international selection. He has not featured for Brazil since their 7-1 loss to Germany in the 2014 World Cup on home soil, and will not want that to be his international swansong.

In hiring Ancelotti, Everton installed about as much European pedigree as it’s possible to get. The 60-year-old boasts a CV that contains five European Cup slash Champions League wins, three as a manager and two as a player. He’s one of only three managers to have won Europe’s top prize three times, the others being Bob Paisley and Zinedine Zidane, and only Francisco Gento, who played for the Real Madrid side which dominated the early years of the European Cup, has more in total than the Italian’s five.

📊 @Everton have lost 1 of 8 PL games since Carlo Ancelotti’s first in charge on December 26.

If Ancelotti is the European pedigree, Richarlison is the potential. Bernard’s compatriot restored Everton’s lead, picking up the ball on halfway from Calvert-Lewin’s flick-on before making Gary Cahill look all of his 34 years, scooting past him and finishing convincingly.

It feels like the current Brazil international has been in the Premier League for some time having played for Watford before joining the Toffees, but he’s still only 22 and is one of Everton’s difference-makers, as shown by this goal against the run of play.

Richarlison was called into action due to the negative side of Everton’s game: sloppiness further back, and the unconvincing form of Jordan Pickford.

We saw the worst and then the best from the England goalkeeper who let Christian Benteke’s shot slip through him for Palace to equalise. He apologised to his team-mates but, shortly after, he saved brilliantly from a Benteke header from point-blank range.

Calvert-Lewin was able to finish the job, tapping in after Richarlison’s header rebounded off the bar. He should have had a second in similar fashion shortly after when a shot from the Brazilian was parried into his path by Vicente Guaita, but he skied his effort into the Park end.

Ancelotti sang Calvert-Lewin’s praises prior to this game, and selects the Englishman above £25m summer signing Moise Kean, of whom he is also a fan. With the likes of Alex Iwobi, Mason Holgate, Tom Davies, and Kean on the bench, Everton have some depth, and given the age of these players it is future-proof depth.

They are a side who need just a few key additions in order to be equipped for European competition, and on this evidence, it looks like Ancelotti could be the manager to put the blue side of Liverpool back among the European elite.