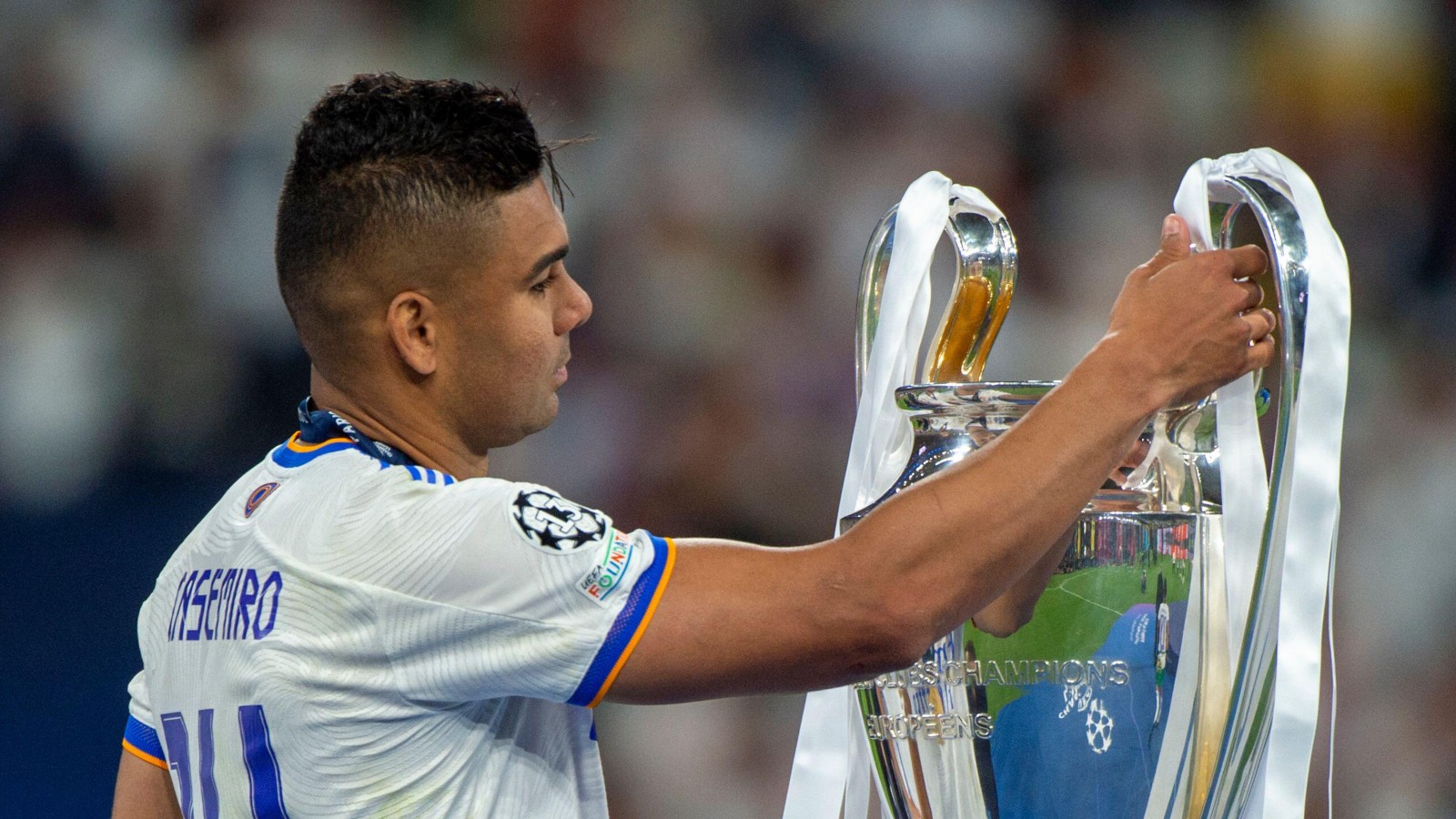 Man Utd have needed a Casemiro for years. He could be the one to break the hex but if not, his career has already been too good to ruin.

Who’s this then?
Carlos Henrique Casimiro is a 30-year-old, 6ft 1in Brazilian defensive midfielder born in São José dos Campos. He has just left Real Madrid and signed a four-year contract with Manchester United in return for a transfer fee of £60million.

He got his start at Sao Paolo as a youth, making his first-team debut in 2010 aged just 18. He played four seasons in Brazil, making 111 appearances and scoring 11 goals.

At that point Real Madrid put their head around the door, looked him up and down and said they’d quite like to take him to Spain on loan.

They put him in the B team and he played 15 games in the Segunda División before being elevated to the first team and signed permanently. He was sent to Porto for a season to get some game time and he turned out 41 times in Portugal, scoring four times in 2014/15.

Having proved himself, he went straight into the Madrid starting XI and from 2016 onwards, played over 40 games every season, managing to avoid any serious injury, racking up 336 appearances for Real and scoring 31 times.

He started playing for Brazil in 2011 and by this year had racked up 63 caps and chipped in with five goals.

He’ll need a big trophy cabinet to house all of his medals. These include three La Liga titles, one Copa del Rey and a mighty five Champions Leagues. With his country he won the Under-20 World Cup as well as a Copa America.

All of which makes him somewhat over-qualified to climb into the Manchester United clown car alongside McFred. It seems unlikely he’ll add to his medal collection in Manchester. This is a serious player, one of world football’s best defensive midfielders (though he can operate further forward to good effect). Will he be brought down to United’s standards, or will he improve them?

Why the love?
Anyone who has watched Real Madrid in recent years will have seen our man operating at the highest level. In some ways the fact he plays the role he does means he is not always the most obvious, in your face player. He’s not the one who is going to dribble past three people, won’t be burning up the grass in high speed sprints, won’t be scoring a hat-trick. What he will be doing is breaking up transitions in his defensive third, robbing the ball off the opposition and distributing it forward and efficiently.

It’s a position that requires you to always be involved, constantly patrolling. In other words there is no hiding place and little time to take your foot off the pedal, not least because he can also drive forward into the penalty area and be an attacking threat, as 47 goals and 40 assists in a career total of 503 club games shows.

He loves a good sliding tackle and can do that reacharound thing where he goes in from behind and nicks the ball off the foot of a striker without bringing the player down. Always impressive, that.

More typically he’s a meaty harrier and blocker who is in the opposition’s face, generally getting in the way until he can dispossess them of the ball. That is the modern way, of course.

It takes strength and presence. He also has that eyes-on-the-ball stab with his foot, which is a sort of tackle, but just steals the ball away without touching the man. Clever.

Standing at 6ft 1in it’s not as though he’s one of those short, stocky, combative midfielders. He’s a real physical specimen who has the muscularity to dominate the more weedy boys.

Watching him during his Madrid career, two things really stand out: he’s got great ball retention and isn’t easily dispossessed; allied to that, give him some space to run into and he can drive forward at some pace and make things happen. And he certainly knows how to volley a ball.

On top of all this, he seems a smiley sort and has lovely squirrel-ish cheek pouches and who doesn’t want a defensive midfielder that looks as though he could store hazelnuts in his mouth?

We used to call this ‘clearing out’. Always popular with your fans:

This is simply fantastic defending:

Future days?
United have signed many, many, many players who were fantastic for other clubs but some shade of dreadful as soon as they arrived at Old Trafford. So the first test he faces is to make a difference, to make them harder to beat, to shore up the midfield and help the front third operate more efficiently.

Not much to do then.

He could be not just a transformative player for United, but THE transformative player. The one they have been hoping to sign for 10 years. They have certainly needed a top notch defensive midfielder for at least a decade and their leaky defence has required screening to within an inch of its life.

Because he’s 30 and not 25, it’s a lot of money to have paid, but needs must, I guess. As we saw on Monday, there is no shortage of quality going forward at Old Trafford, but they simply have never been knitted together properly. Casemiro may be the cement that makes them whole.

He needs to make a good impression immediately. A few tough tackles and ball recoveries should endear him to the Old Trafford faithful.

He has not suffered any major injuries during his career and at 30 has already made 566 career appearances for club and country. This could mean he’s one of those naturally very fit people who will play into his late 30s without any major drop off, or it could go the other way and he’ll be burnt out after a couple of years playing in the Premier League, which does tend to be played at a more frenetic pace than in Spain, a fact often claimed as a positive, even though it quite often leads to games that are more wrestling than dancing. Faster is not always better.

However, he’s on a four-year contract with an option for an extra 12 months. If he can keep his Madrid standards up for most of those years, Manchester United will be very pleased indeed.

However, there is always the United caveat. They have made good players go bad so often now that it actually feels like a curse. One good result against Liverpool seems unlikely to have turned that fact around in its entirety and their model, such as it is, always expects the new signing to be great straight away and that’s not as easy as it might seem.

The good news is that at 30 they can’t ruin his career. He’s already so well-established as a top player that not even the Old Trafford hex is going to make much difference to his legacy.

Graeme Souness might not think he’s a world-class player – even though, ironically, he reminds me somewhat of Souey, only without the psychotic stamping tendencies – but his record both domestically and internationally rather suggest he absolutely is. Welcome to Manchester, Carlos. Don’t go changing, eh?