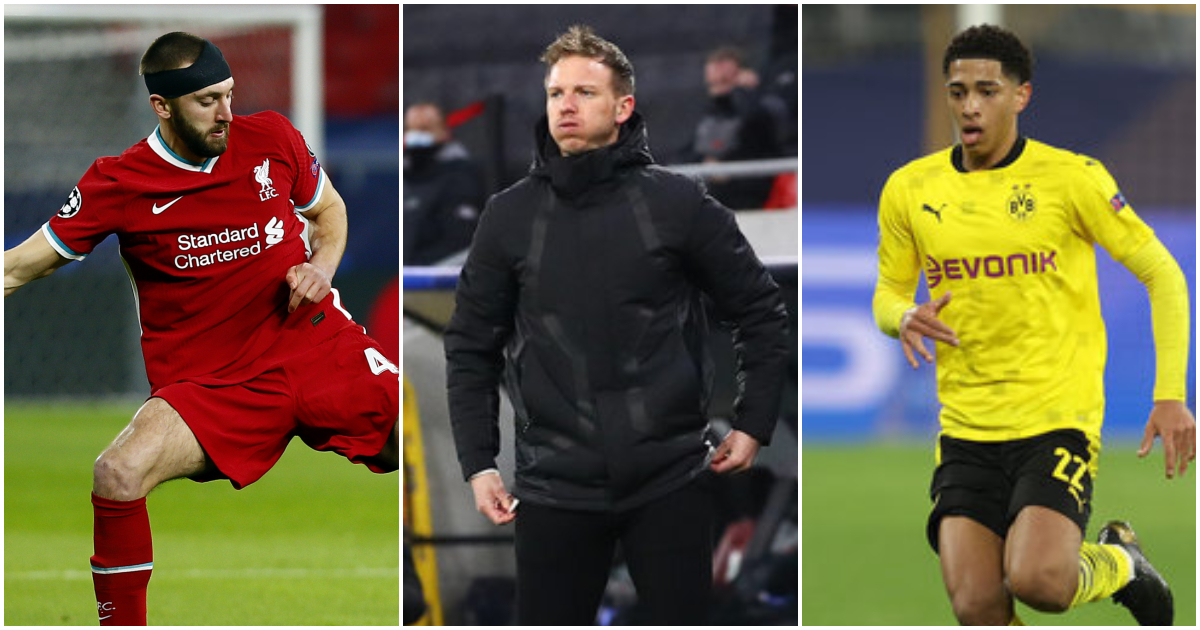 The focus will be on Juventus, and rightly so. But brilliant Jude Bellingham and Liverpool natural Nat Phillips deserve plenty of spotlight.

Pepe
Joao Gomes Cravinho should probably watch his back. He might be Portugal’s Minister of National Defence in title but that honour will always belong to Pepe in spirit after Tuesday evening.

Keylor Navas continued the theme of Real Madrid cast-offs proving the folly of their Bernabeu downfall, but few have ever really doubted the goalkeeper’s ability. In the case of Pepe, he was released in 2017 and publicly complained about his treatment by the club, but his decision to move to Besiktas betrayed a centre-half whose best days were far beyond him.

A return to Porto has helped reignite the fire that defines him. Pepe was a player reborn against Juventus, a warrior who took grave offence at the very idea someone might try and breach the net he swore to protect. The extra-time, stoppage-time overhead kick typified his resistance: one of his 18 clearances when no other player managed more than eight.

Chancel Mbemba was impeccable alongside him – Premier League clubs must be interested there – while Porto as a whole were phenomenal: more of a team as ten men than Juventus could ever hope to be with a full quota of players. Sergio Conceicao’s side will not be the desired draw they perhaps once were at this stage, and so much of that is down to their captain.

Cristiano Ronaldo owns this competition but Pepe leased it from his compatriot with a commanding performance. He has made 31 appearances in the Champions League since the 2014/15 season and 18 have been in the knockout stages. It remains the case that whenever the pressure is on, few are better or more effective.

Nat Phillips
And he took that personally. If Wednesday evening taught us anything it’s that Nat Phillips is precisely the same but entirely different to the rest of us: we have each felt that instinctive need to try and control any falling object with our feet, be it a ball, an item of clothing or, in our collective foolishness, a kitchen knife. It is mechanical, subconscious, involuntary.

Phillips is overcome by that very same reflex but with his head. He’ll stick it on anyone or anything provided it keeps it as far away from goal as possible. It is a remarkably admirable trait.

If that portrays him as some sort of basic throwback then that is not the intention. Phillips displayed excellent tactical awareness, pressing Leipzig unnaturally high and disrupting their rhythm throughout. This was not a faultless display but it did not have to be. He and Ozan Kabak did what was needed.

The 23-year-old will never be of the requisite standard to start every game for a side like Liverpool. But this season has proved the importance of having a deep squad with players capable of stepping straight into an established structure without missing a beat. They should resist any temptation to cash in on a player whose value might never be higher. Phillips will be much better for his experiences in 2020/21.

Oh, and Fernando Torres (65). Even with the Spaniard’s recently attained beefiness you’d still back the inevitable Haaland to take him.

Sergio Conceicao
Eleven coaches have managed a team outside the Big Five European divisions to a Champions League knockout stage win over a side in the Big Five European divisions this century. Sergio Conceicao joins Ronald Koeman as the only two men to do so in different seasons. And judging by the fact the latter was in England a few years after dispensing with Liverpool and Arsenal at Benfica and PSV in 2006 and 2007 respectively, Conceicao can perhaps expect an Italian job after adding Juventus to a list of scalps that includes Roma in 2019.

Jude Bellingham
For a country that supposedly excels in the art of building them up to knock them down, England have done an awful – and thus brilliant – job in hyping Jude Bellingham. You’d think that starting consecutive Champions League knockout games was the done thing at 17, such is the relative lack of fanfare granted to Dortmund’s latest young star.

Much of that is by design, of course. He and his entourage perhaps considered that it was better to be out of sight, out of mind in that regard. Bellingham could undoubtedly take the media attention in stride but it aids him far more to develop away from the limelight.

Against Sevilla he was effortlessly influential. Bellingham has the energy of a teenager but the aura of a seasoned professional. It is not normal to have such intelligence in a difficult position at any point, never mind before he has hit his home country’s legal drinking age.

There was a stage at which some were up in arms over Bellingham’s England call-up in November. It’s time to show them highlights of him controlling the midfield in a Champions League knockout game while relentlessly sledging the opposition and see whether minds have changed over those five months. Put some respect on his name because we’ll be seeing plenty of it for the next decade or so.

Youssef En-Nesyri
His exploits were more than slightly overshadowed by that product of nuclear weapons testing on the other team, but Youssef En-Nesyri matched Erling Haaland stride for cyborg stride with an excellent penalty and a fine stoppage-time header in vain.

His probable reward will be to raise that bar further when West Ham sign him for £50m in the summer. En-Nesyri that is, not Chamakh. Mind you…

Attention will be on Haaland, and rightfully so, but it’s worth noting the young forward on the other side of the ball.

Federico Chiesa
The future of a Juventus side that has faltered in the present and is stuck in the past. “I don’t take anything positive from this evening,” was Federico Chiesa’s forlorn message after Porto sent The Old Lady to the nearest retirement home, but those without any obligation to wallow in the moment will have enjoyed watching a sensational talent come of age.

He deserved far better. Chiesa is, by my rough and admittedly almost definitely wrong calculations, the first player since Tore Andre Flo for Chelsea in 2000 to score three goals in a two-legged Champions League knockout tie in a losing effort. Juan Cuadrado was the only teammate operating at even half his level.

Fabiago
It was every bit as beautiful as we all knew it could be. Even if and when everyone gets injured, keep that.

Andrea Agnelli
Ha ha. Stop taking a hammer to football to try and fix it and maybe focus on making your actual club better instead of everything else far worse to drag it down to your level.

Juventus
You can see why Juventus want reform to protect their place. The best European interests of Porto, Lyon and Ajax are unlikely to be served all that well by any new Champions League format yet each of those teams have embarrassed them in the last three seasons.

The Ajax side of 2019 were sensational. The unparalleled circumstances of 2020 contributed to their demise against Lyon. But there are no such excuses in 2021. Porto, as masterful as they were, should not be able to vanquish Juventus. These are not two sides starting from the same position, but fine management on one side and systemic failure on the other has closed that gap.

A quick glance at their recent coaching history shows that this been a managed decline for Juventus. Antonio Conte to Massimiliano Allegri to Maurizio Sarri were slight downgrades each time, but Andrea Pirlo does not belong in that conversation. He might never. They thought their position at the top of Italian and European football was so embedded and safe that they took an uncalculated risk on an absolute novice. That Pep Guardiola lightning may strike again for an elite side one day, but Barcelona ensured to place him in a structure which allowed him to thrive.

Juventus have done the opposite with Pirlo: expecting him to overhaul their style but lumbering him with an undroppable player that is the absolute antithesis of pressing and possession play. Cristiano Ronaldo is a spectacular footballer but everything has to be geared towards him to make it worth it. They were foolish to think that simply dropping him into a side that had reached two Champions League finals in the previous four seasons would push them over that line.

Obsession obscures logic and the Juventus gamble has backfired massively. They deserve to stagnate as a result, ten points behind Serie A leaders Inter Milan and out of Europe. When you quite openly base everything around one competition from the start of the season, you leave yourselves painfully open to chance. It would be nice to think they might learn from their mistakes but why bother when you can just change the rules instead?

It’s not his fault, that should be obvious. Juventus management has been as bad as Barcelona’s.

Julian Nagelsmann
The kickback was predictable, the usual crowd waiting impatiently for their moment to strike at the heart of the hipsters. ‘Is this your king?’ they hastily asked, citing his record against English teams, questioning his high defensive line and, as one prominent journalist put it while constructing a delightful straw man, claiming he had failed ‘to live up to his billing as the second coming of Pep’.

Those same people will champion the competitive nature of the Premier League while deriding the monopoly of, for example, the Bundesliga, where Leipzig are second and two points behind Bayern Munich with top scorer Christopher Nkunku on six goals while Robert Lewandowski threatens to break all manner of records.

He is clearly a prodigious coach destined for great things provided he continues to develop as he has so far. Nagelsmann is 33; it would probably be too early to write him off as a player, never mind a manager. And Liverpool have won 11 of their 12 European knockout ties under Jurgen Klopp. No matter their domestic form, this is their lifeblood. Only a fool would completely dismiss their hopes of lifting the trophy.

But with that said, those two games were chastening for Leizpig and their young manager. The first leg was undermined by individual errors; the second was naive and ineffective from approach to execution. Nagelsmann spoke of “lessons” to be learned after the latter but Leipzig went into that match two goals down after Mo Salah and Sadio Mane scored within five minutes of each other. The same players netted in the 71st and 74th minutes to kill the tie and sum up their inexperience.

Liverpool were set up to counter Leipzig’s passing out from the back and seamlessly adjusted to quell the aerial threat of Alexander Sorloth after the break. In both instances, Nagelsmann played into Klopp’s hands. He wasn’t the first and won’t be the last.

Ousmane Dembele
There is plenty to be said about a player who gets into goalscoring positions and situations with unerring regularity. That does not just happen: it requires perceptive movement, precise timing and absolute awareness. Ousmane Dembele has plenty to glean from his performance.

The Frenchman will be under no illusions as to what he must work on next. If he can add a finishing touch to his wonderful talents then Barcelona’s £135.5m investment will soon look far more sound. With injuries behind him the 23-year-old can play a key role in an uncertain future. Solid foundations are finally there for him to build towards something special.

Cristiano Ronaldo
Letting a long-range free-kick through your legs to pretty much secure elimination from the competition that has come to define you is stellar work. He played himself. Siiiiii you next year.

Virgil van Dijk
Good luck getting your place back, mate.

Sevilla
They still drop into the Europa League, right?