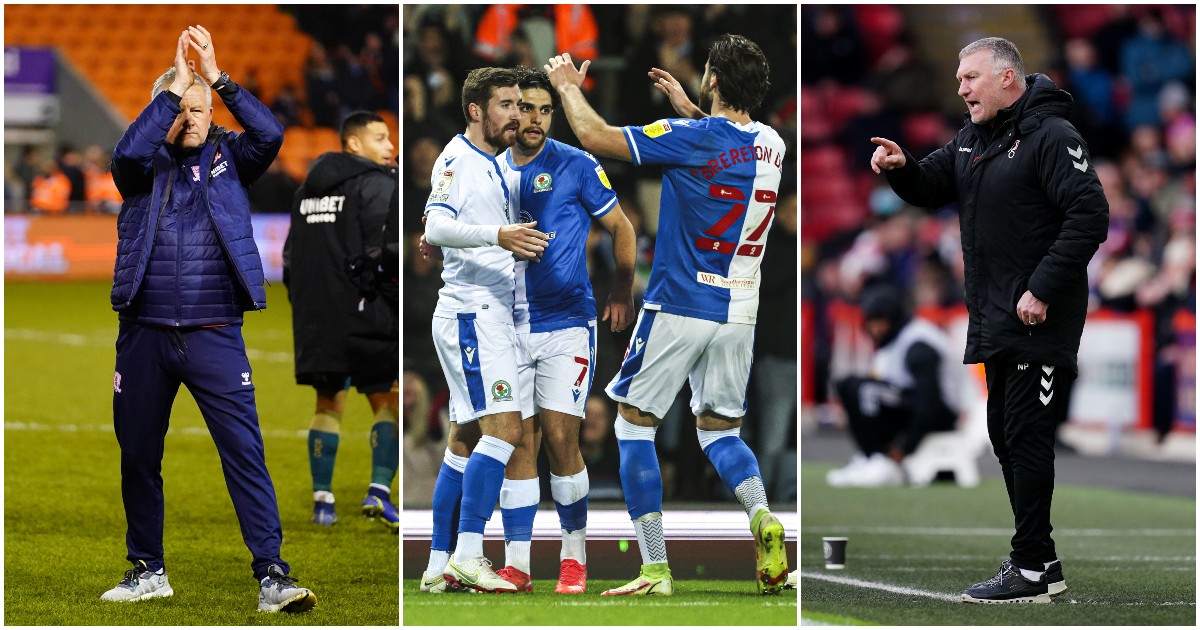 The EFL continues to truck on, much like Chris Wilder with Middlesbrough and the miracle workers at Derby. But Nigel Pearson is in trouble.

Chris Wilder
Middlesbrough’s lofty position in the Championship table may be somewhat borne of fortune with Covid not affecting their ability to play, but Chris Wilder’s new side are beginning to look every inch a team capable of promotion to the Premier League. Almost every team below Boro have at least one, if not multiple games in hand over the Teesside outfit, but in reeling off wins on repeat, they have given themselves cause to be chased.

Such was the uninspired inconsistency suffered under Neil Warnock in the early stages of the season, it is almost impossible to conceive Middlesbrough having taken benefit of their nearest opponents being unable to play and stealing a march on a spot in the top six. Wilder brings magic to everything he touches and Midas himself smiled on Boro when the Tangerines of Blackpool struck a 91st-minute leveller. It only served to make Middlesbrough’s victory ultimately more satisfying and all the more improbable when Duncan Watmore hit the decisive blow two minutes later.

With Brighton striker Aaron Connolly on his way to the Riverside, Middlesbrough’s biggest vice is dealt with before January has even begun. We are very excited. Boro fans should be even more so.

Derby County
Despite having 21 points deducted from their total this season, a third win in a row takes Derby to just four points off Barnsley in 23rd. Of course, finishing 23rd or 22nd is no tangibly better than coming rock bottom, but it’s the next target to hit. Given the trajectories of the two clubs, it should not be long before the Rams finally move places. A hard-fought yet equally well-earned victory over an out-of-sorts Stoke side means that Derby are now the 13th-best performing team in the second tier.

Given the squad at their disposal, it is no exaggeration to state that Wayne Rooney has been the best second-tier manager this season, pound for pound. The goals either side of former star Tom Ince’s equaliser came from Luke Plange and Colin Kazim-Richards – two strikers at very opposite ends of their careers. Their goals on Thursday combined in the common objective of keeping this Derby team afloat in the second tier. Suddenly, it is looking not altogether ludicrous to suggest that can happen.

Joe Rothwell
This is getting really very boring now, Blackburn. A sixth win in a row and a seventh in eight without defeat since going down 7-0 at home to Fulham means Rovers’ march for promotion back to the Premier League is getting more and more serious with each game. Against lowly Barnsley, Tony Mowbray’s side were far from their best, but they didn’t have to be. If there is one side to have an off day against, it is this Tykes outfit.

But if there is a beauty in winning well – Blackburn have excelled in that through December – there is an artistry to winning ugly. Joe Rothwell benefited from a mistake in the middle of the Barnsley pack to put Blackburn ahead, and for all the wondrousness of Ben Brereton Diaz and his 20 goals and counting, Rothwell is indicative of the majesty that goes into this Rovers team behind the Chilean. Far from a household name like many of his teammates, Rothwell is a young, hungry star who is making this Blackburn team tick time and time again.

There will be tougher tasks ahead, but Blackburn have both the flair and the mettle to come through it. Anything less than a play-off place now would be a huge disappointment.

Duane Holmes
His return to Huddersfield has been a mixed bag so far. Since departing Derby for a second spell in Kirklees, Duane Holmes has largely flattered to deceive, but proved the world of good with his goal against Nottingham Forest to take the Terriers back into the top six. Three wins in a row for Huddersfield, and Carlos Corberan is looking very snug once more on the touchline.

Tom Bradshaw
Far from a regular goalscorer, Tom Bradshaw has a habit of making the difference when it matters. Against Coventry, the Wales striker was one of just 14 fit outfield players, including 15-year-old Zak Lovelace. But Millwall persevered with their threadbare squad and one of the most experienced of the lot proved decisive with his sixth goal of the season. Bradshaw has largely flattered to deceive at Championship level, but helped take Millwall back into the top half and keep their hopes for a play-off place alive. If he can do that regularly, the Lions have as good a chance as half a dozen teams in a similar position.

Ross Stewart
Sunderland’s festive double header with South Yorkshire sides this week was always expected to produce one rout. We thought in defeating Doncaster 3-0, that had been dealt, but the Black Cats put Sheffield Wednesday to the sword days later with a magnificent home performance – the best the Stadium of Light faithful have seen since their brighter Premier League days.

Having gone scoreless for much of November and December, Ross Stewart’s penalty to open proceedings against Rovers on Boxing Day sparked some confidence in the big man. His hat-trick was the starring performance against supposed promotion rivals Wednesday, who looked a mile off the pace from first whistle to last. Make no mistake, this could at last be Sunderland’s year.

Kieran McKenna
It had taken the best part of a fortnight over advent for Kieran McKenna to get his hands on a League One game after being appointed Ipswich Town manager, but the former Manchester United coach wasted no time in stamping his mark on Portman Road. Against promotion hopefuls Wycombe, Ipswich were far from superior, but won on the stat that mattered thanks to James Norwood’s third goal in as many games.

The Chairboys came into the fixture in a position that the Tractor Boys had expected to have when the season began. It will take an incredible job to get Ipswich there now, but in McKenna, they at long last have a manager at the start of his managerial journey and potentially at the club for the happy long haul. Three points to begin is as good a start as could be hoped; now to find the consistency in team selection and results that were both so severely lacking under predecessor Paul Cook.

Good start from McKenna. I think the formation and instruction to play out from the back will benefit us, can see the coaching already.
And solid defensively too. Let’s build on it now Town.

Oxford United
In among all the usual suspects and high flyers for League One promotion, Oxford United continue to hover under the radar despite the fact they are no strangers to being in this position. Last season’s beaten play-off semi-finalists marked their promotion credentials with a 3-0 pasting of AFC Wimbledon on Wednesday night to move back into the top six with comfortable aplomb. The previous defeat to top-six rivals Wigan could have dented the U’s confidence, but Karl Robinson’s men returned with a confident performance and three well-earned points. The rest of the third tier should be very afraid.

Coventry
Coventry had not played for 18 days prior to their home defeat to Millwall, so a slide down the Championship table came with that particular caveat, but a meek defeat to the Lions showcased that there is no guarantee of returning to the loftier climes with which they were so accustomed in the opening months.

Without a win since the first week of November, Coventry’s miraculous season is very quickly becoming a slightly impressive one. There is no shame in sitting in upper midtable – it still represents a great improvement on last season and seemed a near impossibility from where the club sat just a couple of years ago. But after producing so many late magical moments and fightbacks this term, Wednesday night felt particularly lacklustre and lifeless for the Sky Blues, who ended such a great calendar year with a whimper rather than a bang. The absence of games is fonder for the heart than losing in such circumstances.

Cardiff City
Steve Morison had brought back some level of control to Cardiff’s season in his caretaker role following Mick McCarthy’s dismissal, but defeats like this to Bournemouth do not make for happy reading at the start of his permanent tenure. The Cherries had not been this comfortable in a game in months, but weren’t troubled once by a Cardiff side beset with Covid issues. That caveat is far from the only worries with this team, and one can’t help but feel a busy January is in order to keep the Bluebirds afloat in the second tier.

Bristol City
Going into first-half injury-time, Bristol City led, only to end it drawing. Going into second-half injury-time, Bristol City were drawing, only to be beaten. Twice, QPR scored three minutes into stoppage time to give themselves the most hard-fought of victories. Twice, Bristol City conspired to be their own worst enemies. Andy King’s dismissal was foolish for a player with such experience, and the warnings we called out in the summer are coming home to roost at Ashton Gate. If Nigel Pearson is still the manager in 2022, it will be through pure luck and lack of a better option. Rest assured, they are out there. It can’t get much worse.

Morecambe
The exploits of League One’s top scorer Cole Stockton have largely disguised the Shrimps’ troubles in the third tier. After a strong start to the campaign, Stephen Robinson’s side have endured a terrible run of form which has seen them drop into the relegation zone. On Wednesday, they were granted the opportunity to play one of few sides lower in the table in the guise of Crewe Alexandra. At home and with a goal advantage from Greg Leigh’s smart strike, Morecambe looked in great shape.

Instead, a second-half comeback from Dave Artell’s men looked the clearest sign yet that, even with Stockton in their ranks, Morecambe do not have what it takes to stay up.