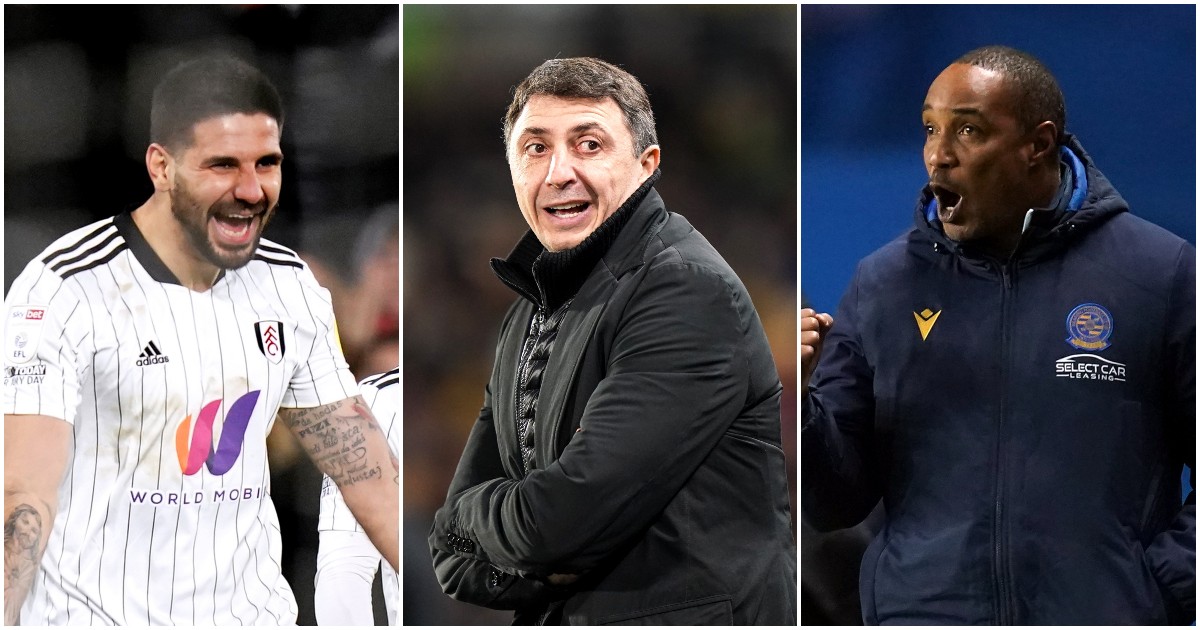 The Championship relegation battle has been transformed as those who seemed stranded are winning and teams considered safe are stuttering.

Poya Asbaghi
The writer’s curse is nothing new, of course, and regular readers of F365’s EFL content will be used to the foot-in-mouth disease that often comes with this column. In the same week that we denounced all three of Peterborough, Barnsley and Reading’s chances of staying up this season, the first side has a managerial change on the horizon and the latter two have started winning like it’s going out of fashion. Barnsley’s 2-0 win over Yorkshire and potential relegation rivals Hull was more than three points; it was a statement of intent.

The Tykes’ goals came courtesy of two of their outstanding performers from last campaign – Callum Styles and Carlton Morris – whose respective subsequent form has shown the club’s stark fall in fortunes. For manager Poya Asbaghi, it is a sign that perhaps the tide is turning his way and the latest left-field appointment could yet prove to be more Ismael and less Schopp. There is still a long gap to safety but win the game in hand and it’s six points to 21st-placed Reading. Two wins in the last three games shows that may not yet be an impossible gap to bridge.

Paul Ince
It was an interim appointment that came out of the blue, leaving huge swathes of Reading fans wondering if they were actually better off with Veljko Paunovic instead. The long-suffering predecessor departed the Royals with a crowning gift: one last win in charge. Interim manager Paul Ince picked up where the Serbian left off. Birmingham at home is far from the toughest test a new manager can get, but a win is a win and this victory took the Royals further away from the relegation zone.

It is unlikely that Ince is the long-term answer to Reading’s problems, but he has already masterminded a first win. With Lucas Joao and John Swift playing starring roles in collecting three points, Reading will be hoping the tide has turned in Berkshire. For Ince, this was a brief reminder that a once promising and successful manager with Macclesfield Town and MK Dons still has some magic within. Reading will need to coax even more out to be assured of a place in the Championship again next season.

Nathan Jones
Since being dismissed by Stoke after a dismal time in charge at the bet365 Stadium, Nathan Jones has enjoyed great success in his second stint at Luton Town. The only bitter taste in the mouth for Jones as he returned to the Potteries was his three defeats from three matches against his former employers. On Wednesday night, his Hatters side put in yet another performance which finally gave their manager a long overdue and ecstatically delivered victory over Stoke because, quite simply, Luton are much better than Stoke.

Right now, there are few clubs in this division better than Luton. That’s mad from the Hatters, as was Jones’ typically overzealous celebrations at the full-time whistle to anyone of a Stoke persuasion who hadn’t understandably walked away long before another dismal home performance was done and dusted. This was the ultimate redemption.

Nathan Jones can never resist the urge to have a dig at Stoke 😅
pic.twitter.com/rSqOaxW0BR

John Swift
After starting the season on record-breaking track for goal involvements at this level, it took until the penultimate game in January for Swift to register his first assist of 2022 and a further couple of weeks for his first goal of the calendar year. In both Paunovic’s last game in charge and Ince’s first, he has registered a goal and an assist in each. If Reading are to stay up, their talisman being back in fine form is a necessary start.

Aleksandar Mitrovic
A penalty might have been the best way for Aleksandar Mitrovic to break Ivan Toney’s Championship scoring record. Nobody inside Craven Cottage doubted he would hit his 32nd league goal of the season once he was bafflingly felled by Peterborough wing-back Harrison Burrows. With each notch of the tally, it looks increasingly certain that Mitrovic will break Guy Whittingham’s second-tier record before the end of the season, too. Only nine more to go.

Wes Foderingham
He started the season behind Robin Olsen in goal and even level as backup with Michael Verrips. With both of those two having departed Bramall Lane in January, Foderingham is the outstanding number one choice. A rock between the sticks since Paul Heckingbottom’s arrival, Foderingham produced a superb penalty save midway through the second half in the promotion tussle with Blackburn to keep the scores level before Liverpool loanee Ben Davies notched a last-minute winner. That’s now one defeat in 15 for the laughable appointment that was Heckingbottom. Everyone connected to the Blades is a big ol’ winner right now, to put it bluntly.

Jon Russell
Huddersfield became the third Championship club to operate a fully fledged B team after Brentford and then QPR set theirs up with great success over varying levels of time. Midfielder Russell was signed to Huddersfield’s in the summer from Accrington Stanley and his performances since coming into the team prove that system could benefit the Terriers.

There is a lot to worry about off the pitch for Huddersfield, but everything is going right on it. In danger of their first defeat of 2022 with three minutes remaining, Josh Koroma’s equaliser brought relief to the John Smith’s Stadium before Russell’s first goal for the club lifted the roof off of it. Huddersfield’s A Team is the real deal as well.

Huddersfield, Brentford and B teams becoming Plan A

Luke Amos
Luke Amos has been anything but a first-team regular this season. He didn’t even make his first appearance until the last game of September. But in scoring a last-minute winner at home to Blackpool to hand QPR their first win in five, the midfielder may prove to be one of their most important players. Avoiding a winless month in taking out the Tangerines, QPR moved up to third with the mental boost that provides.

Viktor Gyokeres
Whatever happens this season, it has been a memorable one for Coventry City and Viktor Gyokeres. Everyone associated with the Sky Blues has had wonderful memories and matches to cherish from their homecoming campaign and striker Gyokeres has proven himself a goalscoring supremo. Both club and individual struggled around the turn of the new year, neither pushing on after a brace in the 4-1 home triumph over Fulham in October. But having gone over three months without netting in the league, three goals in seven games including another last-minute winner at Bristol City in midweek ensured a return to Coventry’s early-season form.

Marcus Tavernier
A promising youngster Tavernier may be, his tangible output has waned this season both under the slog of Neil Warnock’s management and the wondrous stewardship of Chris Wilder. Such is the wild ride the Championship often is, struggling and miserable West Brom looked like upsetting the apple cart that was Boro’s six straight home wins. Step forward, then, Marcus Tavernier, setting up the equaliser before notching a late winner in a second-half turnaround which showcased all the hallmarks of a Middlesbrough team heading in a completely different direction to this West Brom side.

Chris Wilder
That’s what you could have had all season long, West Brom. How Wilder must love that summer rejection from the Baggies now.

Big result for Chris Wilder and Boro. West Brom actually were on the verge of appointing Chris and changed their mind. That one must hurt. #UTB⚽️

Shota Arveladze
Now it’s starting to get interesting. The pride and joy that came with the announced ownership of Acun Ilicali after the dirge of the Allam family was awash with further positivity as Grant McCann saw his noble time on Humberside out with a couple of victories before replacement Shota Arveladze kept the ball rolling. Now that ball, much like Hull’s balloon throughout February, has popped.

Just two points from a possible 18 have been collected this month and with each of the bottom four having picked up some form of momentum over the past couple of weeks, the relegation dogfight is not looking quite so simple. Anything less than three points in the final game of February against Peterborough could mean the Tigers facing a mauling of their own.

The decision to get rid of McCann was as obvious as it was understandable despite that upturn in form. One win and four defeats from seven games in charge for his successor is concerning, and while the only objective this campaign is to finish on the right side of the dotted line, that is becoming less and less assured with every defeat.

Going down 2-0 at home to rock-bottom Barnsley does not stand up to criticism well, regardless of the happiness that swells the MKM Stadium with their new ownership. Continue like this and it could be next man up in the dugout already.

Derby County, on the pitch
Much of this season has seen Derby’s players and management putting the pride into Pride Park while Mel Morris et al. oversaw the club’s potential demise. Now, just as it looks like Derby might live to die another day as a club, their Championship status is increasingly hanging by a thread. Only a week ago, hope became expectation for the Rams to stay up. Fast forward to two successive wins for Reading and two miserable defeats for Wayne Rooney’s side and it’s all looking rather bleak for Derby’s survival bid again. The gap to safety is back to eight points. Have Derby run out of steam just as they looked to get their biggest punch in the arm yet? It’s looking more and more that way.

Bristol City’s old habits
For the seventh time this season, Bristol City conceded a goal in the 89th minute or later. As a result, they have dropped 12 points from these positions. Conversely, the Robins are 12 points off the play-off places. There is so much to like about this City side, but just as much to hate, too. They will not move forward as long as they continue to take two steps back with such regularity.

Steve Bruce
Predecessor Valerien Ismael seemed to make the latter half of this column on a bi-weekly basis at least, so it’s nice of successor Steve Bruce to step up to that same mantle. It is best advised to not lay the blame for poor performances and results squarely at the feet of a new manager, but West Brom seem to have gone backwards in Bruce’s first four games in charge. Jayson Molumby scored the first goal of the new era after nearly five hours, but it’s looking unlikely to be a long or successful time in charge for Bruce, who endured another bad night in the north-east after his Newcastle struggles. West Brom are going nowhere this season. It is all really rather glum.

Blackburn’s attacking woes
That’s eight out of 10 league games in 2022 that Blackburn have failed to score in. A penalty miss at 0-0 made this defeat one of the most disappointing of their entire campaign to date.

Blackpool
The F365 curse is real. As soon as we wrote about how well Blackpool and Neil Critchley were performing this season, losing the same day was inevitable.