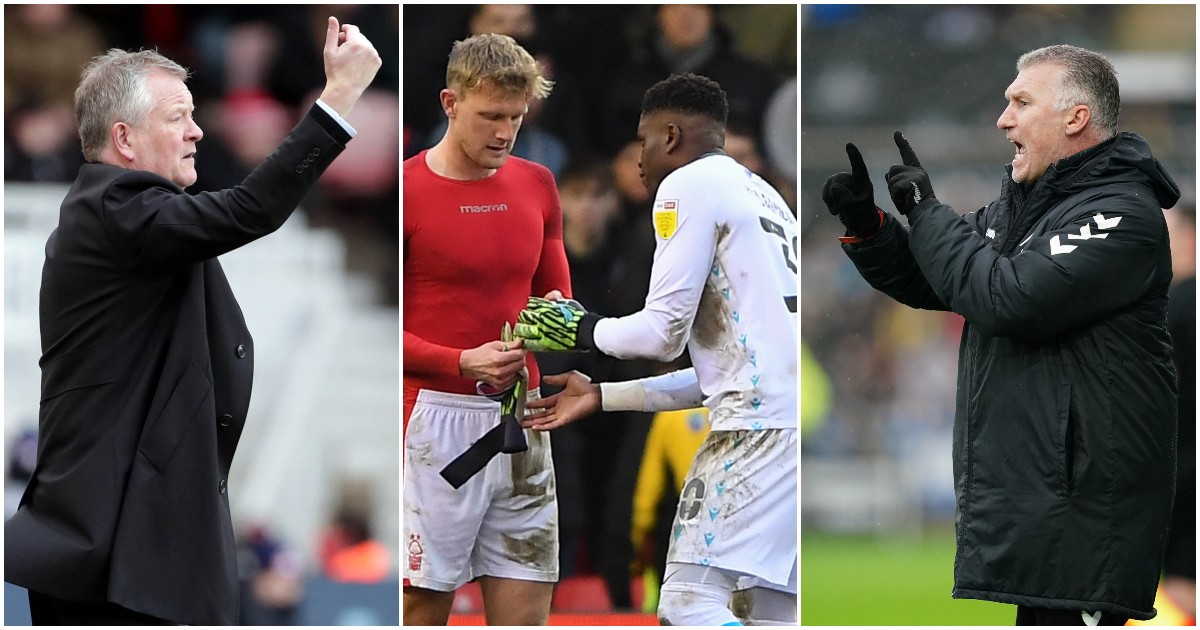 Bristol City are going nowhere incredibly fast but Birmingham have foundations upon which to build after an excellent January transfer window.

Birmingham City’s January signings
Birmingham City could consider their Championship status almost certainly preserved for another season by the events at the very bottom of the table, but their January transfer business is proving to be the final one percent.

Luton’s trip to St. Andrew’s saw two sides headed on two very different trajectories, but there was a Prince and the Pauper tale to this fixture, which saw Birmingham run out 3-0 winners with each of their goalscorers having been brought to the club last month. For all the genuine and much-needed criticism aimed at many facets of how this club is run, the silver lining of that improvement in recruitment is welcome.

Juninho Bacuna – the only permanent signing of the three – netted his first goal since swapping Rangers for the Second City before loanees Lyle Taylor and Onel Hernandez continued their fine starts. Permanent moves in the summer would benefit all parties. More positive results like this will make such a resolution all the more tempting for a pair who struggled in the first half of the season with Nottingham Forest and Middlesbrough respectively.

A bit of daylight between Birmingham and the bottom six has opened up. Lee Bowyer’s side can start to look towards next season and an equally successful summer of recruitment as the winter just gone.

Chris Wilder’s home comforts
Chris Wilder’s first two home games in charge of Middlesbrough yielded a grand total of just one point from fixtures against Millwall and Preston. In the six home games since it’s a perfect 18 points from 18. Swansea, Bournemouth, Nottingham Forest, Reading, Coventry and now Derby have all ventured to the Riverside and left empty-handed.

Middlesbrough’s rise under Wilder from the mid-table fodder they had become under predecessor Neil Warnock to promotion challengers has been nothing short of remarkable. This was just the second time in that run of games that Boro conceded, Max Bird’s equaliser a rare blot on another near-flawless day for Wilder and co. But what they lacked in a complete defensive shutout, they more than made up for in overwhelming their opponents on a fraught day packed to the rim with tension thanks to the off-field struggles between the two clubs.

On the pitch, Middlesbrough showed they can do what very few teams in the Championship have done this season: wipe the floor with Derby. This time it was thankfully only on the pitch.

Domingos Quina
Barnsley came into this game rock-bottom of the table and without a win this calendar year. QPR arrived in South Yorkshire unbeaten in 2022 and looking strong for a promotion charge. You know exactly what happened next.

On-loan Watford attacker Domingos Quina has been a bright spark since his late January switch to the Tykes, but one man does not a team make. Fortunately for Barnsley, his strike was enough to separate the sides and turn the form table completely on its head for one day at least. More magic like this from their loan star and relegation may not be a foregone conclusion.

Siriki Dembele
One of Bournemouth’s quintet of Deadline Day signings, Siriki Dembele has previous this season when it comes to late drama. He provided injury-time moments of magic on a couple of occasions for Peterborough in the early stages of the campaign.

With minutes of Bournemouth’s seaside showdown against Blackpool to spare, the Cherries were a goal down and another patch to their inconsistent calendar year looked set to be sewn. But Jamal Lowe’s leveller provided some respite before Dembele struck at the death to take Bournemouth back into the top two with daylight to spare. That’s how you make yourself a cult hero.

Are we feeling like @Jzemura3 or Siriki Dembele this morning? 🤔 pic.twitter.com/b0XCmprBVt

Isaiah Jones
You know you’re good when your club can not only afford to loan out Djed Spence in your position, but also not be tempted by the recall option after a blistering first half of the season. Isaiah Jones really is that good.

Josh Bowler
He was linked with Fulham in the January transfer window and proceeded to score against the Cottagers. Another team chasing the winger’s signature was Bournemouth. You know the rest.

Same old Bristol City
It’s a tale as old as time, and it stopped being funny long ago for everyone of a Bristol City persuasion. Leading against local rivals Swansea City at half-time, there was a slightly muted nature to celebrations even as Andi Weimann struck just before the break. No team has dropped more points from winning positions in the Championship than the Robins this season.

It is an indictment on the lack of quality at the bottom of the table that this Bristol City side are in no danger of relegation, but they are absolutely standing still. In football, you can only stay motionless for so long until you fall backwards. That is where Nigel Pearson’s side are right now – somehow a mixture of inconsistency and precision in feeling like you know exactly what you’re going to get. A 15th defeat of the season still has the Robins three points closer to the top six than relegation, but they are as mediocre as it comes.

Whereas teams like Swansea, Blackpool and Coventry can already start to look forward to next season with glee and optimism, Bristol City have little in the pipeline. We have said it before and we dare believe we will be saying it again, but Pearson is looking less and less like the man to take this club where they want and need to be. Tough times are on the horizon at Ashton Gate with their finances among the worst in the division. It is looking like they will have to sell off their best assets in the summer when Pearson is struggling to get a tune out of this team with them.

Brice Samba
As the excellent Daniel Storey lamented on Saturday afternoon, it is almost impossible to think of a single player with such a discrepancy between his high ceiling of performances and the absolute pits he showed against Stoke City. He would have topped the list but for Ryan Yates’ injury-time intervention meaning that a moment of madness from the Forest goalkeeper – not for the first time in his career – had Forest in the same position at full-time as prior to him punching Phil Jagielka in the penalty area.

If there's a player with a bigger gap between their best and worst than Brice Samba, I haven't seen them play.

But in those mad few minutes, Samba saw fit to swipe the Stoke City centre-back with the ball in his hand and gift the Potters the most needless penalty of the season with centre-back Joe Worrall donning the gloves for the remainder of the match. On his day, and there are plenty of those, Samba can be a match-winner. But one can’t help feeling that he could be Forest’s biggest downfall in making it to the Premier League.

Barnsley’s relegation rivals
At the 12th attempt, Poya Asbaghi saw his Barnsley side not just take the lead for the first time under their second head coach of the season, but pick up their first win of the calendar year, too. That, coupled with defeats for Derby, Peterborough, Reading, Cardiff and Hull all directly above the Tykes, made it a rare superb weekend for the South Yorkshire side.

Somehow, just a third win of the campaign has Barnsley five points off Reading in 21st. With Coventry, Hull and Derby all to come in the next four fixtures, this is a reminder that the Tykes may not yet be done and dusted with the Championship relegation battle.

Veljko Paunovic
There were slight improvements, but nothing tangible enough to make any of this worthwhile. A fourth straight home defeat for Reading means the Royals are still hanging on the periphery of the relegation zone. Once they led, twice they fell behind and Junior Hoilett’s red card made for bad Reading reading.

Ian Maatsen’s strike proved decisive on the day to hand the Sky Blues a rare away victory, but this sinking feeling is becoming all too familiar in Berkshire. That there is still no sign of an end to Paunovic’s time in charge is testament to the disaster behind the scenes at the financially crippled club, who can’t afford to not sack a manager who is sending them hurtling towards the third tier. He’s not the biggest problem in getting Reading to this point, but he has never been further from providing the cure.

Derby County
In the same week that Middlesbrough owner Steve Gibson provided a ceasefire in his gunning down of Derby, his team provided the Rams with one of their biggest and few batterings. Renowned for their defensive capabilities this term in their miraculous bid to survive on the pitch as well as off it, Derby were powerless to resist a quite relentless Boro performance. At least this one shouldn’t have quite as damaging ramifications for the Rams.

Luton Town’s Birmingham complex
Luton Town’s season to date has been remarkable, especially in the context of their trajectory from the National League to being on the brink of the Championship play-off places in less than a decade. But rarely has the chant ‘Can we play you every week?’ been more apt than when the Hatters play Birmingham. Having inflicted a 5-0 defeat on Nathan Jones’ side at Kenilworth Road in September, Brum’s 3-0 thumping of the Bedfordshire side was their heaviest away defeat of the season, too.