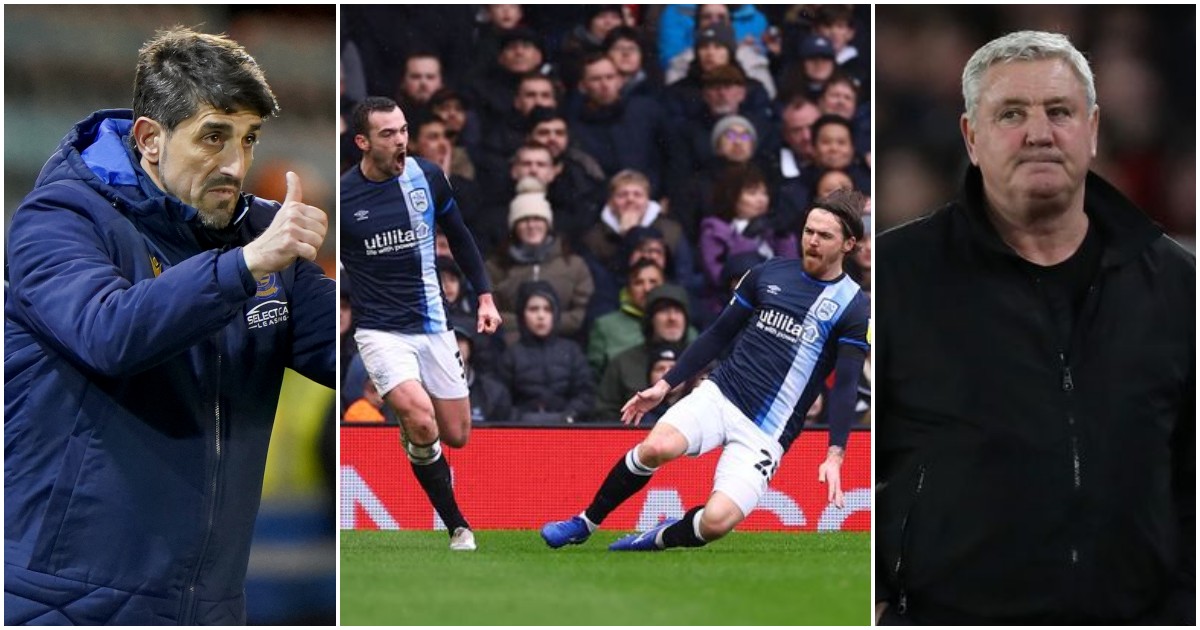 Carlos Corberan
One of the few feelings better in football than being the best is beating the best. On Saturday lunchtime, Huddersfield despatched with table-topping Fulham in one of the Championship performances of the season and almost certainly the most impressive of the Terriers’ 14-game unbeaten run. Two well-taken goals in the first half were followed by a resolutely defensive second half in a display which captured the best of both worlds.

The only remaining unbeaten team in the EFL this calendar year, Huddersfield may have finally made everyone – ourselves included – realise that they are not in this position of strength by fortune. Head coach Carlos Corberan had been a disappointment for much of his first season in West Yorkshire, unable to bring anywhere near the level of magic expected across the M62. Those worries have now completely dissipated as the Terriers tighten their hold on a spot in the top six a little more.

Everyone around Huddersfield has games in hand, but it is Corberan’s side who have points on the board. For as long as they continue to put in superbly coached performances like these, that place in the play-offs will become a stranglehold in West Yorkshire. Fulham aside, Huddersfield can lay claim to a spot in the Premier League next season as much as anyone. If they make the top six, given the problems off the pitch, then make no mistake – Corberan will be in with a shout for Championship manager of the season. Nobody could have foreseen that this time 12 months ago when the Terriers were still winless 10 games into 2021. What a difference a year makes.

Returning Terriers
When a big part of a club’s transfer strategy is to recruit former players, it is rarely a sign of progress or proof of a team moving in the right direction. The signings of Danny Ward and Duane Holmes across the last 18 months both came with obvious caveats but now look like fantastic bits of Huddersfield business. Ward added another goal to his tally for the season, moving onto 11 and level with his second-tier best return in 2016/17. Holmes, who spent time with Scunthorpe and Derby after leaving the Terriers in 2016, is becoming the consistent playmaker Town have craved in much of the time the American was away. What’s Danny Cadamarteri up to these days?

Louie Sibley
Almost a year since his last league goal for Derby, youngster Louie Sibley’s injury-time winner was more than worth the wait in helping keep the pace with Reading in the Championship relegation dogfight. With the Royals picking up three points, some might posit that this victory was wasted, but staying in touch is vital for this Derby side, particularly with captain and talisman Tom Lawrence now out suspended following his lunge early in the second half.

Without Lawrence on the pitch, a moment of magic was needed from somewhere. At 20 years old, Sibley is still one of the more experienced players in this Derby team, such is the plethora of teenagers littering Wayne Rooney’s squad. Sibley’s fine injury-time finish showcased all of the midfielder’s capabilities and importance to this team and continues Derby’s trajectory in completing this miracle.

Allan Campbell
West Brom were gifted chance after chance by a Luton side who looked far off the pace in the first half at Kenilworth Road. But where the Baggies conspired to be their own worst enemies in front of goal once more, the Hatters thought nothing of scoring two good goals to confirm what we’ve all known for some time: Luton are better than West Brom.

The trajectory of the two clubs – both this season and across the last decade – has been stark. Cameron Jerome’s opening header was testament to the veteran striker’s importance to this youthful Luton side, but Campbell’s all-action performance showcased just how right Luton’s recruitment and coaching has been over the last two years. Signed from Motherwell in the summer, Campbell is just what West Brom needed. Unfortunately for Steve Bruce’s Baggies, Luton is far the better place to be currently. They could still feasibly be in the Premier League this time next season.

Antoine Semenyo and Andi Weimann
Eight years separate Bristol City’s Saturday goalscorers Semenyo and Weimann in birth, but their importance to the Robins is equal. The former has been an outstanding player since graduating from the Ashton Gate club’s academy but has finally added goals, with his strike against Middlesbrough his sixth in eight games after just two in the first half of the season.

The scorer of the opener, veteran Weimann, has only been outscored in the second tier by Aleksandar Mitrovic, Ben Brereton Diaz and Dominic Solanke. There is a lot to be glum about in this corner of the south west, but Bristol City scorers young and old still provide plenty of cheer.

Coventry City’s late magic
From the opening weekend of the season and a last-minute winner over Nottingham Forest, Coventry City haven’t been short of providing injury-time magic back in the home surroundings of their own city. A fantastic start was made all the better with late home goals against Forest, Reading, Middlesbrough and Bristol City, but a dwindling return in results meant fewer such dramatic moments.

Against rock-bottom Barnsley, poor defending from the Tykes allowed Coventry defender Dominic Hyam to notch an injury-time winner to mark another great moment in a fine season for the Sky Blues. No club is living off vibes more than Mark Robins’ Coventry.

Morgan Gibbs-White
Any one of more than a handful of Sheffield United’s players could be picked out for special mention in one of the greatest Blades performances since Chris Wilder’s wonderful tenure. George Baldock’s volley was spectacular while Rhys Norrington-Davies continues to offer wonderful attacking output and defensive solidity at left wing-back. But Wolves loanee Gibbs-White opened and closed the scoring while setting up Billy Sharp for added effect, not that it was needed.

It is now one defeat in 14 league games under Paul Heckingbottom, who has proven to be just as inspired a mid-season appointment as Steve Cooper and Wilder at Nottingham Forest and Middlesbrough respectively. That Gibbs-White, one of the few bright sparks under predecessor Slavisa Jokanovic, has only improved since Heckingbottom arrived serves to show the talents of both player and coach.

Continue like this and all concerned will fancy their chances of plying their trade in the Premier League next season.

Veljko Paunovic
The Serbian manager started his Reading tenure with seven wins from his first eight league games in charge, and after many negatives in between, exits with a victory and credit in the bank. Having united almost everyone connected with Reading in wanting him out, Veljko Paunovic got the warmest of well wishes from his former fans when his time with the Royals ceased hours after a 3-2 win at Preston.

One of the kindest and humblest managers in the division, Paunovic has been nothing short of committed, engaged and loving of Reading. The toll of their perilous situation has not been lost on him. He now leaves having earned the club a win which could go some way to preserving their second-tier status, and at last gets the respite from Reading that their suffering supporters can only dream of.

On a completely human level I’m glad Paunovic has now left the club.

He’s looked a broken individual for months and I don’t want to see that inflicted on him.

Do I still think it’s the right decision?

100% but timing is ridiculous but expect nothing less from Mr Dai pic.twitter.com/KaAzkUbqD1

West Brom
Valerien Ismael may be long gone from The Hawthorns, but the fact his dismissal has come with nary a change in fortune nor quality shows the head coach was far from the only problem. Bruce has swiftly come in to replace his beleaguered predecessor and changes are not simply slow in coming; they are negligible to begin with.

Despite being offered chances on a plate by opponents Luton on Saturday, West Brom’s array of poor attackers made it feel like more of the same. In falling into the mid-table echelons, West Brom’s season shows no signs of improvement. Hiring Bruce automatically means that is not good enough. His is not a name which provides much excitement for clubs with as lofty ambitions as West Brom, but the appointment is accepted given his track record of promotion and changing fortunes quickly. The Baggies have not only failed to bounce under Bruce, they have absolutely crash landed. Three games, one point and zero goals leave daylight between them and the top six. They are now as close to Blackpool in 15th as they are to Bruce’s former employers Sheffield United in the final play-off spot.

QPR’s February
January was the month that QPR were supposed to fall away. Three stars went to AFCON and a tough run of fixtures to start the calendar year suggested it might be time that Mark Warburton’s side lost their spot in the top six. A near-flawless month was not expected, but that’s exactly what happened. That makes a struggling February more concerning and perplexing.

While a draw at home to Hull isn’t a disaster, coming in the same month as defeats to Millwall and Barnsley as well as being dumped out of the FA Cup by another lowly Championship outfit in Peterborough has raised concerns about QPR going forward. This could be a blip, but games against Blackpool and Blackburn will help prove whether that is the case or if the dark horses are finally running out of power.

Russell Martin
It was supposed to be a season of transition as Swansea went from the win-at-all-costs approach employed by Steve Cooper to getting their DNA back under Russell Martin, whose MK Dons earned plaudits across the board. There’s only so far that such vibes can carry a team, however, and Swansea’s abject defeat to a Sheffield United side being fixed up mid-season is a damming indictment on any progress being made at the Liberty Stadium.

Swansea dominated possession as they usually do. Sheffield United dominated the match in almost every other metric including the eye test and the one that truly matters: the scoreline. There is no danger of relegation, but Swansea supporters and their hierarchy are clever enough to know the transition will take time. They are also smart enough to realise that matches like these offer no signs of progress. A non-entity of a season will be worth it if Swansea improve enough in 2022/23 to show that pain is part of the process. Nobody in the white corner of South Wales will be holding their breath on that score.

Peterborough and Barnsley
Given the relatively tight spread of points between the Championship’s bottom four, every one added to the tally is vital. With injury time under way, each of the bottom three of Barnsley, Derby and Peterborough were drawing, the latter two with one another.

Hayden Coulson
Two yellow card fouls in less than five minutes on the same opponent in another eventual defeat for Peterborough. Hayden Coulson has been yet another poor acquisition at London Road, as evidenced by this lowest of afternoons for the Middlesbrough loanee.

The Blackburn v Millwall postponement
2:15pm is an unacceptable time to call off a 3pm match. For the sake of the fans, this cannot be allowed to continue to happen.