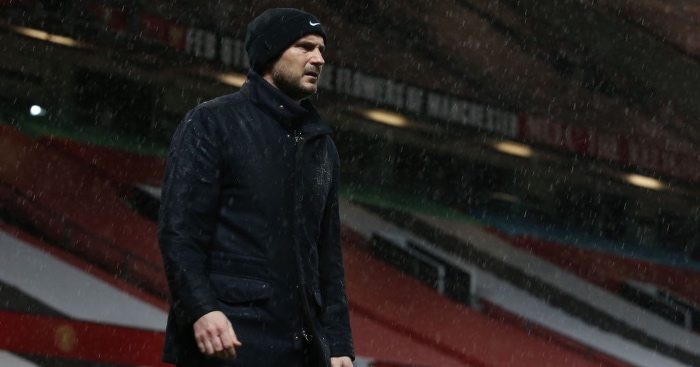 They weren’t pretty, or exciting, or what anyone expected after a summer transfer window that saw Chelsea recruit some of the best young attacking talent Europe has to offer and spend no money at all in the centre of defence. But the goalless draws at home to Sevilla and away to Manchester United provide genuine hope of progression; an actual foundation to build from that has so far been sorely lacking under Frank Lampard.

Excluding domestic cups, this is only the second time Chelsea have kept consecutive clean sheets under Lampard. That was over a year ago when they beat both Newcastle and Ajax 1-0. And while that statistic comes with more than enough caveats, it illustrates well enough the problem that has been at the heart of the criticism aimed at Lampard and the Blues: the defence has been leakier than a sieve from which someone has removed the bits between the holes.

The shift from porous to impermeable is evidently down to personnel. Chelsea would have lost to both Sevilla and United had Kepa Arrizabalaga been in goal instead of Edouard Mendy, who made some very good saves as well as the run-of-the-mill stops Kepa would have dived over or inexplicably not moved for.

The confidence bred by having a decent goalkeeper has been further propagated by Thiago Silva, who – other than an embarrassing slip against West Brom – has been superb. He’s imperious, without forcing and ultimately feigning it like Antonio Rudiger. He’s tranquil and composed, but not so relaxed as to be horizontal like Andreas Christensen. Add to that his quality in possession, playing first-time passes to the full-backs or line-splitting forward balls to the strikers; Chelsea’s 36-year-old free transfer has been their signing of the summer.

Lampard has used over 20 different defensive line-ups in the Premier League, but now – finally – knows his best back line, whether playing with a four or a five. Ben Chilwell, who has a goal and two assists from three league starts, is the undoubted choice on the left. Reece James’ performances have now solidified his spot on the right ahead of Cesar Azpilicueta, who slots into a central three when required. Kurt Zouma has emerged as the best of the also-rans to partner Silva, and rightly so: his power and speed provide the Brazilian’s most suitable foil, while his proficiency in the air gives a greater level of assurance when defending set pieces compared to his counterparts – and provides more of a threat when attacking them.

Whether Lampard was previously unwilling or unable to get Chelsea to this point – where haphazard promiscuity gives way to defensive solidity – it doesn’t really matter. He’s got them there now, and his team are better placed to challenge the Premier League elite than at any point in his reign.

The key is now obviously finding the balance. But it’s surely easier this way round: to be more creative and slowly loosen the tethers from a restrained base, rather than to place bucket after bucket under drips as another fills up.

Chelsea are in a slightly different position to where Liverpool and Manchester City were when they made their transition from entertainers to Premier League champions through their goalkeeper and centre-back signings: Chelsea’s new attacking options are as yet unproven. But they are supremely talented and the feeling with that side of the game, with which Lampard has already shown to be an accomplished coach and tactician, is that it will get better simply with time; time that was never going to heal the defensive woes that appear to have been fixed through recruitment.

It may not be what the neutrals want, or in keeping with the manic behind-closed-doors state of the Premier League, but Chelsea fans should be taking their lack of goalscoring on the chin right now: the fluidity will return. And the fact that the security has finally arrived should provide greater grounds for optimism than the wanton abandon that has typified performances for over a year.