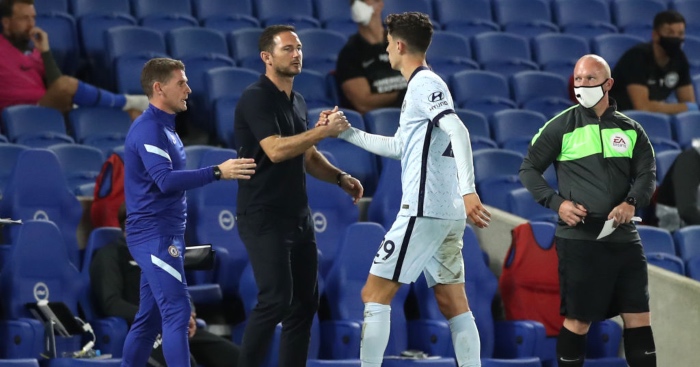 The first game of the season is all about hope. New kits, fresh faces and sun tans. The opportunity to do away with perspective and dream of glory, no matter the guise. It’s a time for snap judgements: for clubs, managers and players to be heralded or written off. The in-betweens are even scarcer this season, with now no draws in the eight games played this weekend. West Ham are going down, Mourinho won’t last the season and Arsenal will make the top four.

Chelsea’s 3-1 victory over Brighton on Monday, could – based on the result – lead to a knee-jerk suggestion of a title challenge for the team billed the Premier League’s great entertainers.

But Brighton will have walked off the pitch perplexed as to how they lost at the Amex. Chelsea looked turgid, even clueless at times, whereas Brighton were well-drilled and confident – they were the entertainers, if anyone.

After popping the ball around under little-to-no pressure for the first 20 minutes, a bit of sloppiness cost Brighton.

Steven Alzate’s mishit square ball was knocked first time into space by Jorginho. Overhit for most, but not Timo Werner – Chelsea’s sharpest player by a distance – who sped to the ball and knocked it past Matt Ryan to win the penalty, which was converted by Jorginho.

They didn’t deserve it.

While Chelsea’s current players looked disoriented, a former one – Tariq Lamptey – was electric for Brighton. Marcos Alonso’s defending against him was suspect, but Ben Chilwell was saved what could have been a harrowing debut. Any left-back would have struggled.

Brighton were dominating the game. And ten minutes of sustained pressure in and around the Chelsea box at the start of the second half paid dividends, as Leandro Trossard’s long-range shot sneaked past, through, round Kepa. Of course it did: there’s a hole in your gloves, dear Kepa.

Trossard’s strike is one a Premier League goalkeeper simply has to save. Reece James’, moments later, is not. He f***ing melted the ball into the top corner from 25 yards. A timely reminder as to why he was kept at Stamford Bridge, while Lamptey was allowed to leave.

But it was again a goal Chelsea didn’t merit, like their third ten minutes later. Lewis Dunk had missed a crucial, golden chance in between – failing to get a proper connection on an unmarked header at the back post – before Kurt Zouma’s tame volley rolled into the net via a deflection.

It was one of those games that leaves you feeling a bit empty: big spenders defeating the little guy through a bit of luck and the odd superior attribute. And also deflated. Chelsea’s first game was given a huge build-up. And even though only two of the new signings were starting, they were the ‘best’ two. How disappointing then, that neither caught fire.

Timo Werner showed his worth in glimpses, but any game without a goal for him will be a disappointment. Kai Havertz looked shellshocked: frequently losing the ball and really struggling with the pace of the game. At least he wasn’t as bad as Ruben Loftus-Cheek, who was truly dreadful.

While there was little new to shout about, the same problems remain.

Frank Lampard claimed after the game his centre-backs were “terrific”, which has got to be a worry. They were fine, but if that’s the standard, Chelsea are in trouble.

They still look like they will concede from every set-piece, with Kepa completely lacking authority and spreading doubt throughout a defence who don’t appear to know who or even whether they should be marking.

Lampard also said he is “happy” with the Spaniard in goal. Which the Chelsea fans will be hoping is the transparent bulls**t it appears to be. They will go nowhere while he remains.

It was a laboured performance. One that was predictably lacking in answers to questions that remain defensively, and disappointingly short of the free-flowing attacking menace the summer business had promised.

The hype will continue to surround Chelsea as further new signings continue to drip into the first team, and some of those – Thiago Silva and a new goalkeeper in particular – may yet turn them into title contenders. But on this evidence, keeping a lid on the excitement would be wise for a while yet.