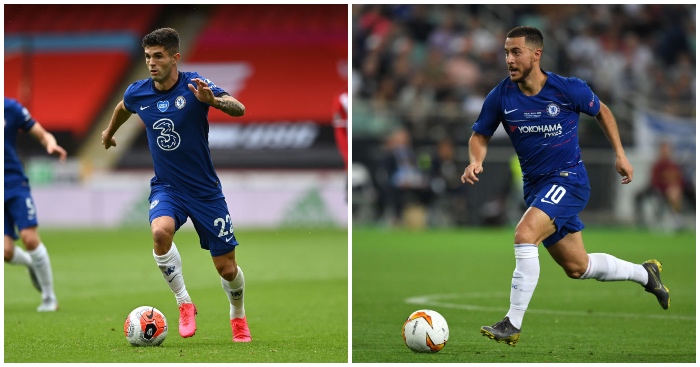 Chelsea fans were left exasperated as Frank Lampard took Christian Pulisic off with 25 minutes to play on Saturday. It was the right call. Giroud replaced him and gave the Blues a focal point that Tammy Abraham had failed to provide. And the American hadn’t had his best game: dribbles he started came to nothing; there was no real link-up play with Abraham; the threat he has posed in behind in recent weeks was reduced to negligible levels by the outstanding Blades defence.

The frustration was there due to a sense that Chelsea’s last real hope at getting back into the game was trudging off the pitch. Pulisic has been the difference-maker for Chelsea since the restart, as his predecessor was for seven seasons at Stamford Bridge.

Lampard has been understandably reticent to compare Christian Pulisic with Eden Hazard; it’s a lot of pressure to put on a young man’s shoulders.

“In terms of the comparison, why I stayed away from it the other night is because Eden has been here and done it and did it to an incredible level. Christian has it in his hands to go and make a real impact over a real period of time.”

But it’s clear why comparisons are being drawn. Pulisic has taken up Hazard’s old spot on the left wing, and like the Belgian, his main asset to this Chelsea side is to dribble at, through and past defenders, luring them into mistakes, creating space for his teammates, winning penalties and scoring goals.

Lampard has managed the £54million signing well. After average performances in the first four Premier League games of the season, Pulisic was taken out of the firing line. Lampard has lived through many a big-money Chelsea signing flogged through start after start in desperation from their manager to prove they were worth the club’s outlay to sign them and he was not going to make that mistake. The Chelsea boss is true to his word in that he picks players on merit; your name and price tag doesn’t matter if there is a better option available. But Pulisic has now settled and Lampard is seeing the benefit of his patience.

“The thing I’m so happy with now is when we are playing teams and the games are tough and we’re finding it hard to break teams down, he’s taking responsibility to change that, to change it in moments he has by using his ability to turn quickly and go past people.”

It’s that ability – that both Pulisic and Hazard possess – to do something out of the ordinary against a packed defence that is so invaluable. Organised teams can easily slide across the pitch as Chelsea switch the play slowly from one wing to the other, particularly as the Blues don’t really have a playmaker capable of imaginative passes through the lines or over the top. By Pulisic dropping deep, turning and bearing down on goal, he spreads dread. Whether he lays the ball off or goes on one of his surging dribbles, he’s forcing the opposition out of their comfort zone.

While they’re very similar in what they offer to Chelsea in terms of the problems they pose for the opposition, there’s a big difference in both style and mentality. Hazard flowed through games; there was a celestial beauty in everything he did. He was the entertainer – there to prove he was better than anyone else. Whether he scored, or even won, seemed secondary, certainly in the early stages of his Chelsea career.

But Pulisic is more mechanical. It’s a bit like comparing Cristiano Ronaldo with Lionel Messi – man-made versus natural beauty. Learning his trade in the marginal gains of the USA before moving to the all-action Borussia Dortmund explains that machine-like style to some degree. There’s not so much time for the ethereal when you’re hell-bent on scoring goals.

Some called it unselfishness, others suggested he wasn’t taking responsibility, but Hazard was frequently castigated for not shooting and scoring more. He had to be pushed by manager after manager to increase his attempts at goal. Not a problem for Pulisic: he averages more shots on goal (3.5 per 90) than Hazard (2.5) did in his last and most prolific season for Chelsea. He has also played 35.2 passes per 90 to Hazard’s 56.

Pulisic has scored a goal every 192 minutes this season, very similar to Hazard’s one every 183 minutes in his final campaign for Chelsea, but the Belgian was far more efficient. Pulisic has scored eight times with an expected goals value of 8.03, while Hazard scored 16 times despite having an expected goals value of just 12.3. Pulisic is just as productive as Hazard but is far more wasteful.

But that will improve. He’s got the greatest goalscoring midfielder the Premier League has ever seen as his coach, and with Timo Werner joining the club this summer, he’s sure to pick up a few tips on finishing. The German scored 28 goals in the Bundesliga this season with an expected goals value of 23.4.

The American’s impact at Chelsea isn’t so astonishing as to prompt a reversion to the give-the-ball-to-him tactics they often employed with Hazard. And with Werner’s arrival, perhaps even more so Hakim Ziyech’s, Lampard is hoping that creative duties will be spread more evenly across the team for next season. Kai Havertz could be added to those offensive riches.

When asked about the comparison with Hazard, Pulisic said: “I’m just going to try to be my own player and hopefully the fans like that guy.” And in truth, parallels drawn between the two will always reflect badly on Pulisic; he’s right to try not to emulate him. And for now at least, the fans like this guy.