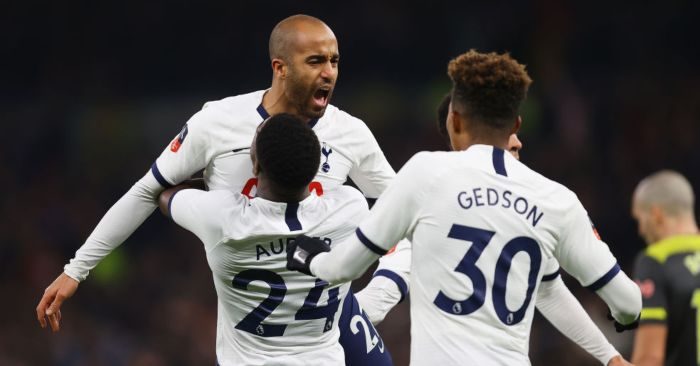 Frank Lampard insists that Chelsea are now ‘underdogs’ for the top four (though the bookies disagree), as his eternal positivity has changed to indulgent pessimism following January inaction. But someone has to win this soul-crushing race for the Champions League…

Draw-hungry Arsenal have all but pulled out as Mikel Arteta focuses on philosophy rather than those pesky results. Manchester United are hoping Bruno Fernandes can be their saviour, but how much can one man realistically achieve in three months? Wolves will be over-burdened by the Europa League and we can brush off Sheffield United’s chances for another month at least, before their excellence and other teams’ mediocrity forces them into reluctant consideration.

That leaves Tottenham. And considering the money they’ve spent this season, anything other than the top four should now – as it was before the season began – be considered a failure.

When Mourinho took charge, Spurs were 11 points off fourth. And despite being unconvincing in almost every match since, they now sit just four points off the coveted Champions League spots. They’re unbeaten in the last six without really playing well in any of those games, and without their talisman Harry Kane, or indeed any striker to replace him.

Not playing well but getting results? A classic determiner of future success.

What they do have is goalscorers. Dele Alli, Heung-min Son, Lucas Moura and new boy Steven Bergwijn are all very good finishers. And crucially they’re finishers who shoot when they get a chance, an obviously beneficial habit bizarrely lost on many of their contemporaries.

If Toby Alderweireld pumps enough long balls forward, any one of that quartet can feed off enough scraps to win Spurs more games than they lose, which will likely be more than enough to earn them a top-four place. Particularly with Chelsea failing to convert the aimless balls into the box Lampard attempts to brainwash fans into believing are clear-cut chances.

And if Mourinho can find the right combination of his very talented, expensive midfielders and asks the centre-backs to pass the ball to them, rather than hoofing it over their heads, Spurs shouldn’t just stumble but stroll into the Champions League.

In the last 20 minutes against Man City and in very, very specific moments in their victory over Southampton – when he didn’t look like he was digesting a full Sunday roast – Tanguy Ndombele looks like he is as talented as his £54million price tag suggests. Like Gedson Fernandes, who enjoyed another skill-laden cameo on Wednesday night, he has got incredible quality on the ball and is capable of sitting opponents down with his quick feet before leaving them for dead with his driving pace from midfield. Mourinho has been typically spiky and outspoken about Ndombele’s injuries or lack there of, which reportedly did not go down well with the Spurs dressing-room. But he’s right to insist it is now time for the Frenchman to step up.

Harry Winks’ form has picked up after a rough start to the season, as he targets an up-for-grabs place in England’s Euro 2020 midfield, while Giovanni Lo Celso seems to be emerging from under the black sheep-shaped shadow of Christian Eriksen. And if Ndombele opts to make his winter break more of a winter work-out, Tottenham will have a near-perfect mix of dynamism, strength and creativity in central midfield, providing more than off-cuts to feed the finishers. And with the apparent versatility of Fernandes available to pick up the slack, Spurs have suddenly got very good options in the top two-thirds of the pitch.

The defence is still a problem – they have just three clean sheets in the 19 games since Mourinho took charge. His off-kilter use of youth product Japhet Tanganga has proved a worthwhile risk, but Alderweireld and Jan Vertonghen still seem to be recovering from Mauricio Pochettino’s ‘draining methods’, and look like they always will be. And we will continue to be able to forecast opposition penalties three or four seconds before they occur while Serge Aurier continues at right-back. Then there’s Hugo Lloris, whose capacity for a brainfart has been a problem for Spurs for at least two seasons.

But while Ole Gunnar Solskjaer smiles cluelessly, Arteta philosophises and Lampard screams into a pillow, Mourinho simply needs to put his best players on the pitch and Tottenham should emerge as slightly less shit than the rest and win a race which is still barely faster than a leisurely park-run.