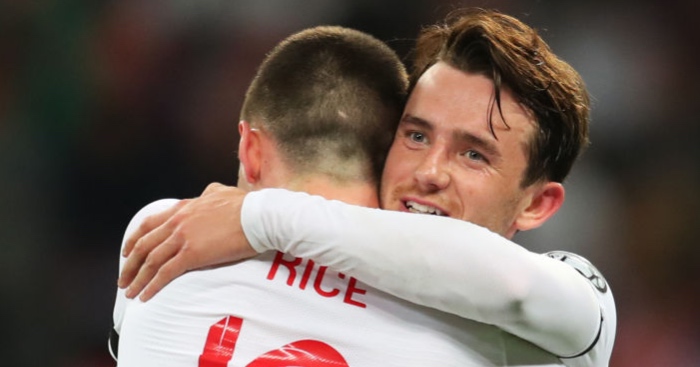 Chelsea are expected to spend a lot of money in the next transfer window – whenever that might be. A transfer ban and bizarre inactivity once that suspension was overturned means Frank Lampard has seen no new faces arrive during his tenure at Stamford Bridge, much to his dismay in January. Chelsea have secured the services of Hakim Ziyech for £36million, which looks a great bit of business. They’ve long been linked with Moussa Dembele, as they need a striker, and Jadon Sancho, because he’s a brilliant footballer. But they have also consistently been linked with Ben Chilwell, and more sparingly with Declan Rice, for £75million each. Yes, you read that right, £75million…

Chelsea need a left-back. Marcos Alonso is brilliant going forward: a real goal threat with a wonderful left foot. But his lack of pace, poor positional sense and a propensity for rashness means Lampard will only use him as a wing-back. Chilwell is a decent alternative. He’s got three assists and two goals in the Premier League this season and is a member of the second most miserly defence in the division.

It’s seemed like an assumption all along – rather than a possibility – that he would move to Stamford Bridge, and to not get him through the door now would somehow feel like a huge disappointment. But rather than the sensible price of around £40million that Chelsea may have been able to prise Chilwell away with last summer when they were first showing signs of interest, they will now have to fork out nearly double that amount, simply because their approach stinks of desperation, not because his performances have merited such a ridiculous sum of money.

It’s made even more ludicrous by the fact that half a Chilwell would likely buy you a full Ricardo Pereira – Leicester’s other full-back – who is probably twice the player.

But at least a move for Chilwell makes sense; signing Declan Rice does not. Chelsea play a possession-based style, with a metronomic passer at the base of their midfield. Jorginho has done it to varying degrees of success for most of the season, while Billy Gilmour was impeccable in the two games immediately before the season ground to a halt.

It is probably the most important position on the pitch for Chelsea. Whoever occupies the role needs the ability to take the ball in tight spaces in the defensive third, play short and fast pinpoint passes to create space through the middle of the pitch and isolate opposition players against those that can do real damage.

Does that sound like what Rice does at West Ham? He tries to do those things, sure, but what inevitably happens is he gets pushed further and further towards his own goal through a mixture of a poor first touch and inaccurate passing, which ultimately ends in him either giving the ball away or hoofing it up the pitch. He looks like a centre-back playing in midfield – which is exactly what he is. The new Eric Dier.

There has always been an odd acceptance that England internationals cost far more than they’re worth. But in fact, £120m for Sancho in today’s market doesn’t seem too ridiculous and Harry Maguire for £80m looks far less silly now than it did a few months ago. England have got some excellent players in their starting line-up that are worth huge amounts of money, and will likely have some very good players on the bench that would also cost a pretty penny.

But just because someof those players are worth a lot of money, doesn’t mean they all are. The deserved increasing price tags of Raheem Sterling and Trent Alexander-Arnold do not automatically drag the cost of the rest of the team up along with them. Chelsea are trying to buy the weakest links in that England line-up, from the areas of the pitch in which they are actively seeking other, better options. While Gareth Southgate is presumably pouring over the lineage of Gilmour in a desperate search for an English grandmother, Chelsea want to buy the vastly inferior defensive midfielder the England boss wants to upgrade.

Why? He’s an England international by default. They’ve got to be smarter than that.

Chilwell would be a world-record transfer in his position and Rice would not be far off should Chelsea sign them for £75m each, which in itself should be enough to make them think twice. Just look at the goalkeeper.