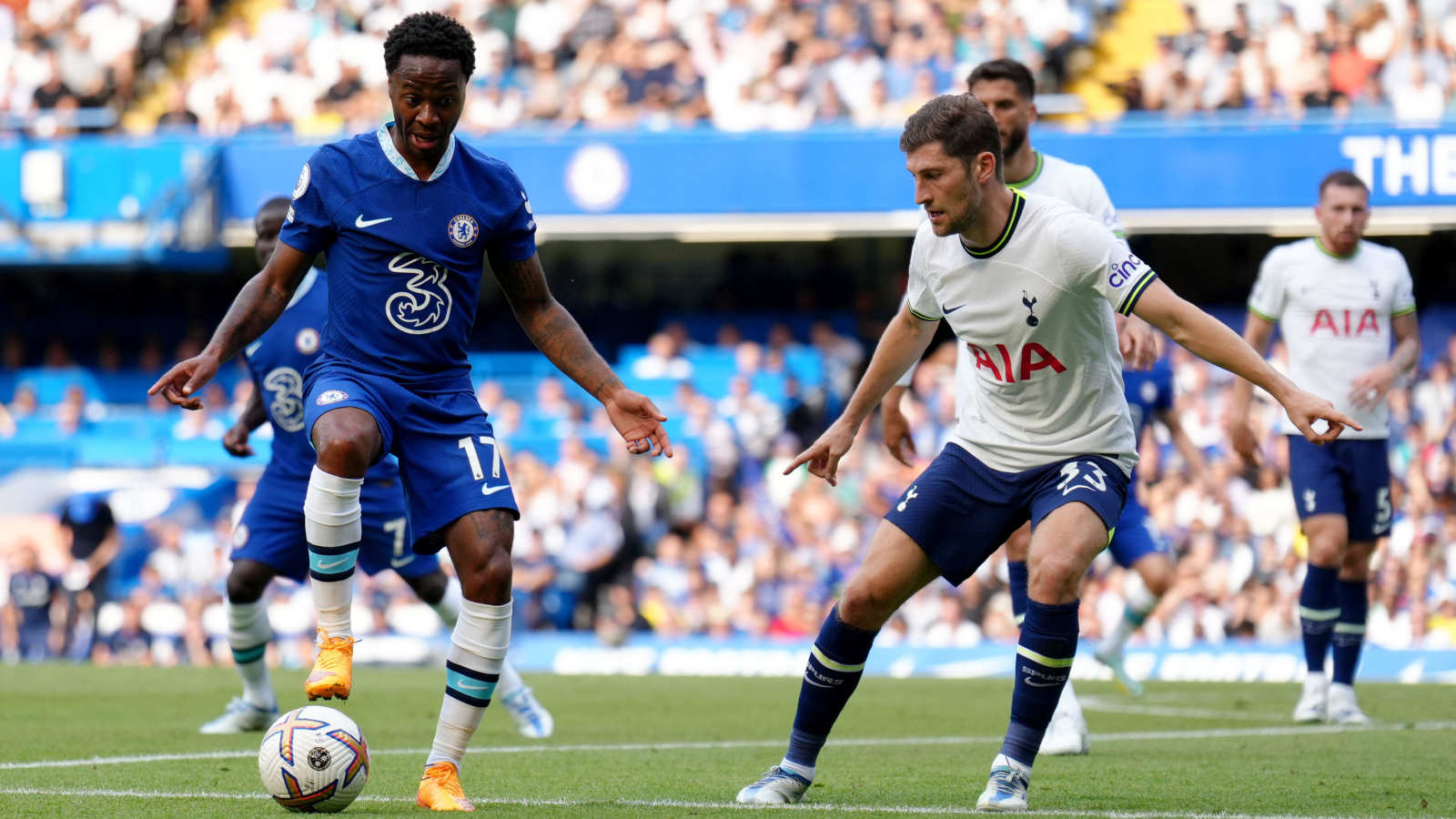 Chelsea vs Spurs featured a lot of arguing, a very late equaliser and two managerial red cards. All the stuff we ‘don’t want to see’, then, eh?

Well, it took us a couple of weekends to get there, but we did in the end.

At Stamford Bridge, a combination of the heat, competition and an age-old rivalry resulted in the Premier League’s first truly explosive match of the season, with Thomas Tuchel and Antonio Conte ending their days with a red card each at the end of an afternoon of drama, bad tempers and atrocious refereeing.

There was a curious contrast between the two teams as they took to the pitch. The home side did so with three of their summer signings present and correct. But for the second game in a row, Antonio Conte named a Spurs team made up of the same players that he had at his disposal last season.

It is a curiosity, for all the talk about Spurs having had a ‘successful’ transfer window, that Conte chose to do so. It’s easy to interpret something like this as a baller move, a flex with the implication that the best is yet to come.

Spurs ended the first weekend of the Premier League sitting top following an unusual but still successful opening day win against Southampton. There was much to admire about their performance: recovering quickly from conceding an early goal; scoring four of their own and none of them coming from Son Heung-min or Harry Kane; and the outstanding performance of Dejan Kulusevski.

But at the same time, there were question marks. A familiar lack of concentration had led to them conceding first and, well, this was all coming against a team as defensively suspect as Southampton.

It was also noticeable that Spurs created everything from the wings with little coming through the middle. What might happen against a team that would press harder in that part of the pitch?

For Chelsea, the first home game of the season really did mark the start of a new era for the club. Roman Abramovich is now a slowly fading memory, but Todd Boehly can hardly be said to have been parsimonious with the club’s pursestrings. While their 1-0 win at Everton on the opening weekend was enough but little more, they will surely only continue to improve as their new-ish team continues to take shape.

There does remain a huge question mark up front. They still haven’t replaced Romelu Lukaku and have now sold Timo Werner back to RB Leipzig. And while Raheem Sterling is a terrific player, he hasn’t thus far been a great scorer of goals throughout his career.

Will Chelsea still try to go for that 20-a-season striker or is the intention to try and style out 2022/23 with a false nine or similar, perhaps while waiting for the right player to become available?

Of course, the question becomes slightly less relevant when you’ve got a defender who can absolutely shank the ball past a static goalkeeper in the way that Kalidou Koulibaly did after 19 minutes. He’s never been prolific, has Koulibaly. His previous 14 seasons as a professional had only brought 20 goals in all competitions, from 474 games. But on this occasion, he swung his foot through the ball, leaving Hugo Lloris statuesque as it smacked against the back of the net.

This may have been a once-a-season type of moment for this particular player, but Koulibaly’s goal was no less than Chelsea deserved for a pressing opening period. After a bright first four or five minutes the Spurs presence in central midfield was negligible to say the least, with a high press from the Chelsea midfield leaving the back half of the Spurs double pivot looking more like the back end of a pantomime cow than part of a sophisticated machine of any sort.

Chelsea were quicker to the ball, and a combination of this and apparent frustration among several Spurs players at having so little of it themselves led to both possession and careless fouls being unnecessarily conceded.

Mason Mount drifted between their midfield positions as though running between cones on the training ground.

And this quality ran throughout the Chelsea team in the first half. Marc Cucurella’s performance was such that Ben Chilwell may have been watching it through the gaps between his fingers. N’Golo Kante played as though his injury-blighted time was a collective hallucination we’d all been through and it was actually still the latter stages of the 2016/17 season.

Neither Kane nor Son had a touch of consequence between them – Son in particular was marked into irrelevance by Reece James – and Spurs broke just the once: Ryan Sessegnon chasing down the left channel while Stamford Bridge held its breath for a flag never came, requiring Eduoard Mendy to block with his legs.

But that was more or less it for Spurs’ first half creativity. Kulusevski, so creative and incisive against Southampton, was an irrelevance.

By the end of the first half they seemed relieved enough just to have a spell of passing the ball about amongst themselves, with Chelsea having spent much of the previous ten minutes knocking on the door of putting the result beyond any reasonable doubt. But they didn’t, and that turned out to have unforeseen consequences.

To considerable surprise, Conte didn’t make any changes at half-time even though it looked as though his team desperately needed them. After all, this seemed to be a tactical problem, with Chelsea playing between the gaps that Spurs were creating in midfield.

It barely took a couple of minutes before Harry Kane turned the ball diagonally across for Son, who forced another block from Mendy despite a very tight angle and the ball running away from him. But a familiar pattern was soon set again – of Chelsea pinning Spurs back and playing between them.

Richarlison was introduced shortly before the hour for the largely ineffectual Sessegnon.

And then, with just over 20 minutes to play, all hell broke loose when Spurs put the ball into the Chelsea goal. The arrival of Richarlison had given Spurs a little more movement in attacking positions, with space on the right increasingly evident as Cucurella pushed forward.

Rodrigo Bentancur did foul Kai Havertz, but this was not given and was, coming 24 seconds beforehand, almost certainly too far prior to the goal was scored to be called back by the video assistant. Pierre-Emerick Hojbjerg, who had hitherto played most of the afternoon in the apparent role of ‘midfield ghost’, hit a low daisy-cutter across the goal and in.

It was certainly questionable. Richarlison was clearly offside but apparently not considered to have been blocking Mendy’s view. Bentancur’s tackle on Havertz may have been just too soon to be picked up on replay, but it was a foul.

Sky Sports refused to show the footage, but early suggestions that this was all a result of Conte celebrating the goal in Thomas Tuchel’s face seemed misplaced. Whatever, the television broadcaster decided that these scenes that no-one wanted to see wouldn’t be seen by anybody regardless.

Within a few minutes it all felt somewhat irrelevant anyway. James was outstanding all afternoon, and his cross from the right should have been converted by Havertz from five yards out. But this was only temporary respite. Their blood apparently up as a result of the nature of the Spurs equaliser, Chelsea swarmed back forward, Sterling dragging the Spurs defence out of position and creating space for James to shoot past Lloris.

Cue Thomas Tuchel haring down the near touchline like a stretched Jose Mourinho. A slow-motion replay confirmed that he didn’t turn his head to pull faces at Conte as he passed the Spurs bench.

But Spurs had improved somewhat in the second half, albeit this was a bar so low they’d have had to limbo not to pass it, and the introduction of Ivan Perisic and Yves Bissouma with ten minutes to play felt as though it had come at least half an hour too late.

Spurs had improved since the introduction of Richarlison, and the withdrawal of Kante with seven minutes to play – you guessed it, with an injury – only added to the feeling that, having looked pretty comfortable for most of the previous 85 minutes, Chelsea were suddenly hanging on a little.

And six minutes of stoppage-time, the inevitable result of the earlier high jinks, turned out be to be too long for Chelsea to hang on. Mendy stretched to tip a Ben Davies’ header over the crossbar as there was still time for more drama.

As the clock approached 95 minutes and 50 seconds, Romero seemed to grab Cucurella’s hair as Spurs took a corner from the right, but the referee inexplicably didn’t give a foul.

Second time around, Perisic’s corner from the right found Kane, and his glanced header flew into the corner to give Spurs a late, late goal and a point that they arguably deserved for their late burst of tenacity, but for little else that they’d actually shown throughout the match. Certainly not for the first hour.

And then, at the full-time whistle, a perfect coming together of Prime Barclays Nonsense. With the full-time whistle blowing on 98 minutes and everybody on the touchline still absolutely fewmin’, Conte offered an extremely adolescent squeeze and it all kicked off again. Both managers were sent off for their troubles. It was an appropriately knockabout ending to an afternoon that had become hot and bothered to the point of being pantomime-esque.

Chelsea supporters have good reason to feel unhappy. Having controlled the game for as long as they did, they should have been able to see out those last few minutes, and complaints about both goals seem justified. But even though they do still lack a guaranteed goalscorer, their performance in this game was a considerable improvement on their opening day win; supporters can be satisfied that their team is ultimately headed in the right direction.

Spurs end the day in a confusing position: extremely happy with having plundered a point but with the team’s performance raising a question or two. Despite only brief appearances, Perisic and Bissouma will surely be set to start for them soon, while Richarlison added a little flavour when they could get the ball into the final third of the pitch.

And even the commentators seem to be finally giving up on the idea that the petulant silliness of football managers butting heads like rutting deer or getting involved in some shouting and gesticulating is something that the audience needs to be somehow protected from. Truly these are scenes that no-one wants to see, they mutter, as they swing the cameras away. Except for just about everybody else, that is. Hook it up and inject it into our veins. The sillier, angrier and more petulant, the better.