Home Middlesbrough Wilder and Boro are recreating their past glories together 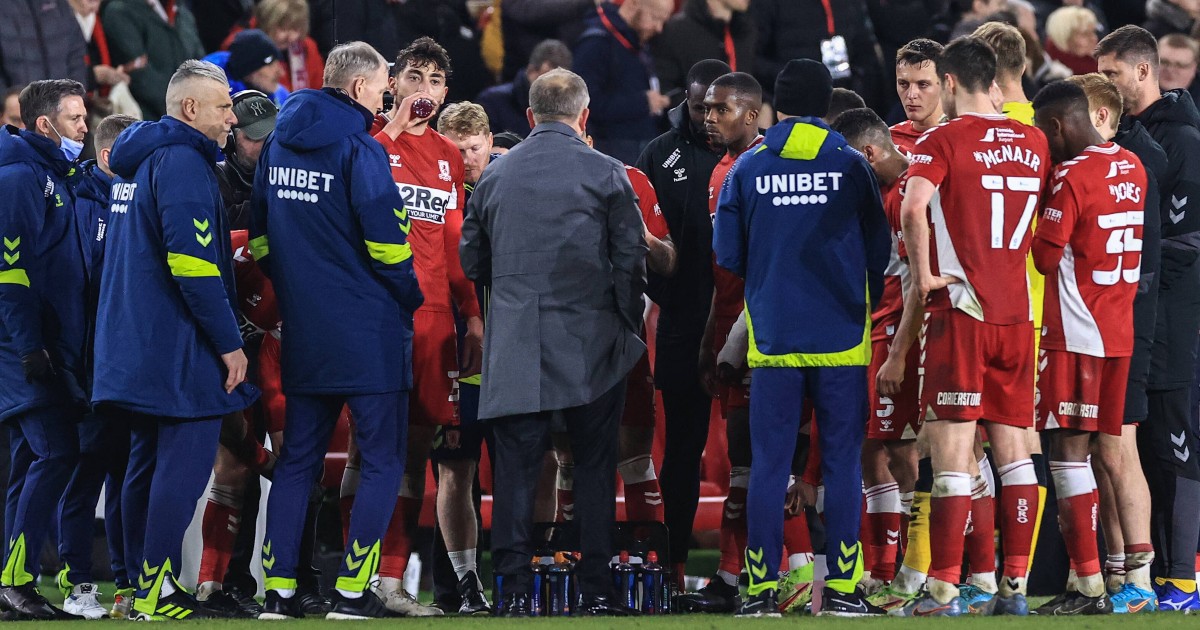 Chris Wilder is capturing his Sheffield United magic and Middlesbrough are making the most of it to finally create some glorious new memories.

There is something about games under the lights at the Riverside Stadium, where the noise and the throng can catapult Middlesbrough into the realms of memories that will last a lifetime. Two nights in the spring of 2006 have been immortalised: the UEFA Cup quarter and semi finals against FC Basel and Steaua Bucharest. But the magic returned almost 16 years later, this time in the FA Cup fifth round against Tottenham Hotspur.

Time and context signify the depth of change around Teesside since. Back then, Boro were a club at their peak, living out the dreams of its local chairman Steve Gibson. On Tuesday evening, when teenager Josh Coburn scored an extra-time winner to secure a second successive Premier League scalp after beating Manchester United on penalties at Old Trafford, their underdog status was more pertinent.

They are a Championship side on the edge of the play-offs, with only one Premier League season in more than a decade under their belt. A club now used to looking in on the big occasions, longing to feel them again. Maybe that made the first sell-out crowd in five years shout that little bit louder; it was a reminder of what they used to enjoy.

Middlesbrough have always been about defying the odds. Steve McClaren’s mid-noughties side encapsulated that best, not just against Basel and Steaua – both almost identical Massimo Maccarone-inspired comebacks that would make a screenwriter gasp – but throughout Gibson’s reign. He’d saved them from financial ruin in 1986 and almost immediately looked to put them on the map to compete with bigger North East clubs like Newcastle and Sunderland. Within a decade, they’d left their decrepit, cramped former home of Ayresome Park, which was engulfed by terraced housing, and built a 35,000-seater stadium in the docks.

By 1996, they had lured Brazilian superstar Juninho and Champions League-winning striker Fabrizio Ravanelli before reaching two cup finals and being relegated in a blaze of controversy after a three-point deduction for failing to put a team out at Blackburn Rovers due to a virus in the camp. Things were never plain sailing, but always entertaining.

Perhaps their years of Premier League exile are in some way a consequence of the glory enjoyed under McClaren. They won the 2004 Carling Cup, the only piece of major silverware in their history, two years before their European odyssey which took them all the way to the UEFA Cup final. But when McClaren took the England job, pursestrings were tightened. Gareth Southgate, ironically enough now in charge of the national team, was thrust into the dugout having retired as captain before completing his coaching badges.

Signings were curbed, too, and when that happens, decline is inevitable.

Chris Wilder is allowing us to dream again.

The series of highs we’ve experienced in his short time so far surpasses anything we’ve felt since the Karanka days (and he’ll soon surpass those on the current trajectory).

An initial resurgence under Aitor Karanka didn’t last. Over recent times, Gibson’s vision has wavered drastically, flitting between philosophies and styles, never gaining momentum after their last relegation in 2017. Young, seemingly progressive coaches like Garry Monk and Jonathan Woodgate were replaced by elder statesmen Tony Pulis and Neil Warnock, meaning the team alternated between defensive tactics and expansive football and the squad was the product of mixing eras.

Under Chris Wilder, though, they have regained that sense of collective progress. He showcased the way he can infect the culture of a club and drive it forward at Sheffield United, taking them all the way from League One to the Premier League. His locality and relatability made it easy, but there was something about the way he directed absolutely everything, from mentality to tactics. Bramall Lane became electric on a matchday – particularly in that first season after promotion when, until the pandemic hit, a European charge was a genuine possibility.

Teams would be swallowed up from the first whistle, unable to counter the overlapping centre-backs, a novel way Wilder made the Blades effective in attack without ever losing their stealth in defence.

It crumbled in the end; longevity is served by investment and Sheffield United, like so many others, failed on that front. Injuries didn’t help but momentum was their buzz word. They reacted to the home crowd and it drove them on. Football’s fan absence meant playing in empty stadiums. That, ultimately, proved the fatal blow.

Beating Spurs in the manner they did felt like a reminder for Boro, but equally for Wilder. It showed the power of a community pulling in the same direction and proves he can change the fortunes of clubs who are withering against memories of past success. This was a reminder of what Middlesbrough have been. It may be a small town in relative proximity to three city teams with much grander histories – Newcastle, Sunderland and Leeds – but if harnessed, their togetherness can push them onto greater things. They’ve bloodied the nose of the establishment before; this is not new to them.

Chelsea are coming to town next and there will be no grand entrance, no sense of ease. Middlesbrough beat Jose Mourinho’s Blues twice in the McClaren days. The evidence of an upset is hard to ignore. Coburn, their most recent hero, was a toddler the last time Boro could call themselves any kind of force, but perhaps now, there are seeds of difference being laid.

What really matters is getting back to experiencing games like that every week, which means pushing for promotion again. Finally, things could be changing on the banks of the Tees.