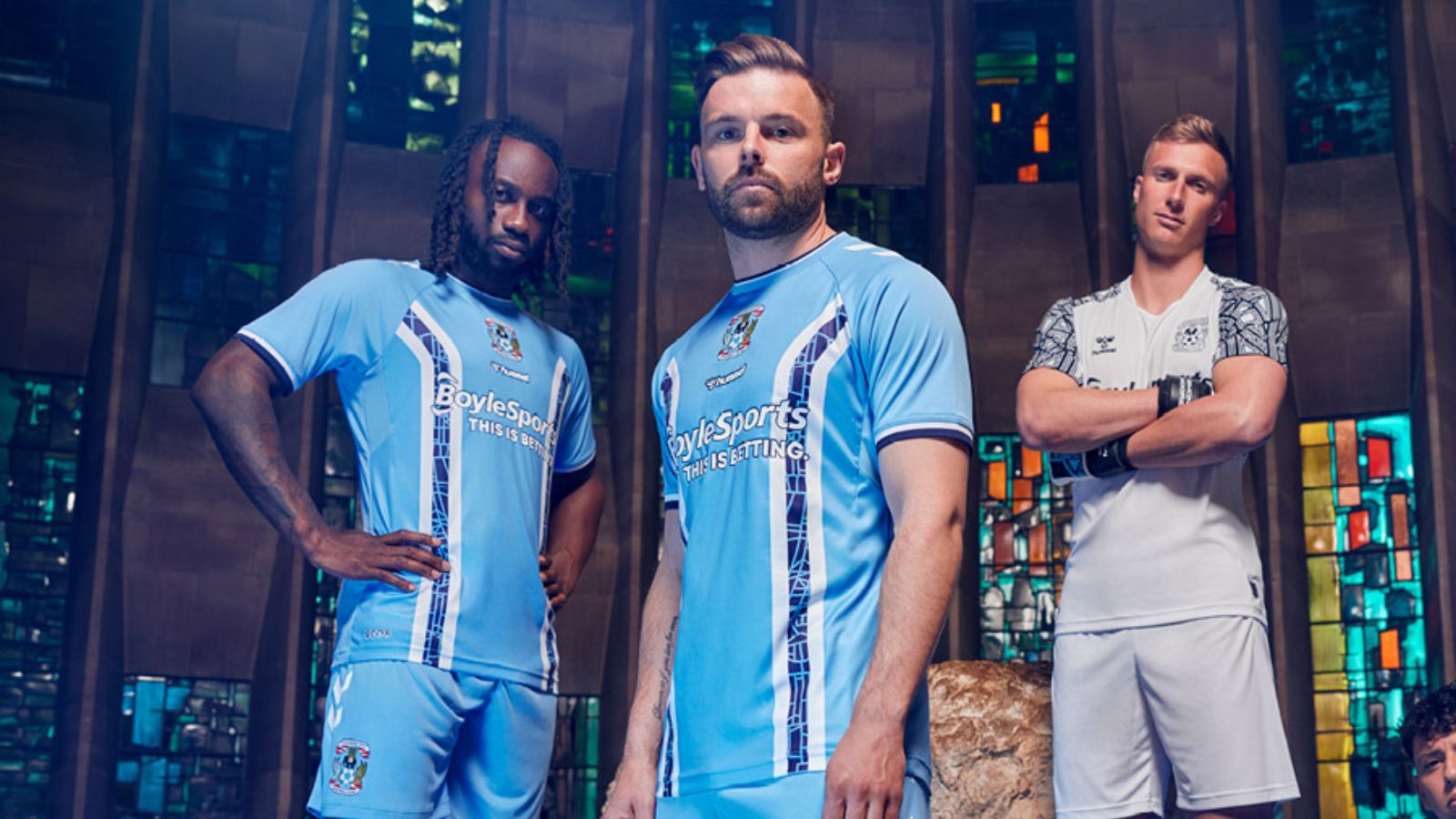 Coventry City have released a new kit based on a design from 45 years ago. The retro market is big in football, and is continuing to grow.

It’s football kit launching time of the year again and Coventry City have, not for the first time in recent years, created a ripple of praise on social media. The new design is an old one, harking back to the ‘tramlines’ kit that they wore from 1975 to 1980 (although it is made by a different manufacturer to that which designed the original, the template of which was also used by Belgium at the 1982 World Cup and Wales during the late 1970s), and it’s not the first time that the club have gone back to the future for their design inspiration.

For the 2011/12 season, their kit aped the design used between 1962 and 1967, when the arrival of Jimmy Hill as manager took the club from the Third Division to the First in five years. Five years later, they matched the colour scheme used for the 1987 FA Cup final. And when Hummel regained the contract to supply them in 2019, they went straight in with a ‘half & half design’, which crossed Coventry’s kits of the late 1980s with a template that was popular elsewhere, most famously with the Denmark 1986 World Cup team.

In uncertain times, the rose-tinted glow of nostalgia can feel especially inviting, and this may be all the more pronounced for football clubs trying to invoke the spirit of a point in history when their team may have been better than it is now. It may or may not be worth noting that Coventry had a tough time between 2010 and 2020, but although, ‘If the players of today aren’t quite cutting the mustard, perhaps they’ll perform better if they’re cosplaying as one of that club’s more successful teams’ might not sound particularly convincing, when you factor in a ready-made market of men in their 40s who haven’t quite recovered from the fact that Madchester is as long ago to their kids as skiffle was to them, it starts to make more sense, certainly economically speaking.

This is different to the ‘classic football shirts’ market, which has proliferated in recent years. This market essentially has two arms, the reproduction market, which sells straight copies of old shirts (and usually at a considerably lower price than the current versions are available for, if you steer clear of some official club merchandise – most of what is available elsewhere is bootleg to some extent or other, and of varying quality), and the second-hand market, in which shirts from the past are bought and sold.

In the latter of these, the size and condition of the shirt are paramount to its value, with added rarity if it’s a shirt that was ‘match-worn’. These shirts can sell for hundreds or even thousands of pounds. In the case of the most extreme example of the hyper-inflation of the second-hand shirts market, the shirt worn by Diego Maradona as he leapt above Peter Shilton’s sack of potatoes impersonation in Mexico City in 1986 was recently sold at auction for more than £7.1m.

The appeal of these shirts seems straightforward enough. In an era of sleeve sponsors, stars above club badges for occasionally tenuous reasons and badges telling you what league a team plays in – couldn’t have people forgetting that, now, could we? – they offer a design cleared of clutter. But they also send out subliminal semiotic messages. There were better times in the past. This team can improve on where it is now. A call-back to this momentous historical moment in our club’s history that you’ve seen a thousand times on YouTube. The retro football shirt sends a message that words sometimes can’t quite convey.

But the new kit masquerading as an old kit isn’t quite the same as either of these. It’s sold at the price of this season’s shirt. It is this season’s shirt, but it’s vanishingly unlikely to become anything like as ‘iconic’ as the original, in no small part because the one-year turnaround on shirts these days makes it almost impossible for them to bed into the psyche like when clubs used the same design for several seasons. Southampton, for example, went five years from 1980 to 1985 without changing the fundamentals of their home kit. For those of us of an impressionable age during that spell, it’s become indelibly associated with the club. They brought it back in 2017, but it was replaced again after a year and… that was that. Fun while it lasted.

This doesn’t seem to be unique to any one generation, rather it seems to be an inevitable part of the ageing process. Just as the greatest World Cup is the one that was closest to when you were ten years old, so market for retro gets later and later. The 1990s are already retro, and it won’t be long before the 2000s are, too. And there is reservation to be held over these retro designs. That above-mentioned Southampton shirt may have been in use for five years, but it was, when it came out, a radical design. They’d worn red and white stripes since 1895. A couple of years later, Le Coq Sportif caused a little bit of a fuss when they changed Sunderland’s shirts to pinstripes and their shorts from red to black. This remains a divisive subject, but it says something that it was on sale in the club shop.

It’s often these radical designs that are the one that end up taking a cult status in later years, and it might be a concern that clogging up the years with designs from years gone by is stifling the opportunity for younger supporters to find their identity in the same way as we did in the early 1980s, 1990s, or whenever. But we’re not quite stuck in an eternal feedback loop just yet. In the years between the half and half kit and the tramlines kit, Coventry came up with a couple of really interesting designs, so young Coventry supporters should get the opportunity to form that same bond.

And as for where the retro direction goes for Coventry next, well, after the tramlines shirt, between 1981 and 1983 they wore a kit entirely based on the logo of their sponsors of the time, Talbot Cars, a design so brazen that The Football League banned them from using it during televised matches, meaning that for two seasons they had to have an alternative home kit for when they were appearing on Match of the Day. Would they go so far as to launch a Coventry kit emblazoned with the logo of a company that has been defunct since 1994? Over to you, Hummel. An audience of several middle-aged people are likely already waiting their next move with interest.