Home F365 Says Is Zidane the only manager for Ronaldo’s Manchester United? 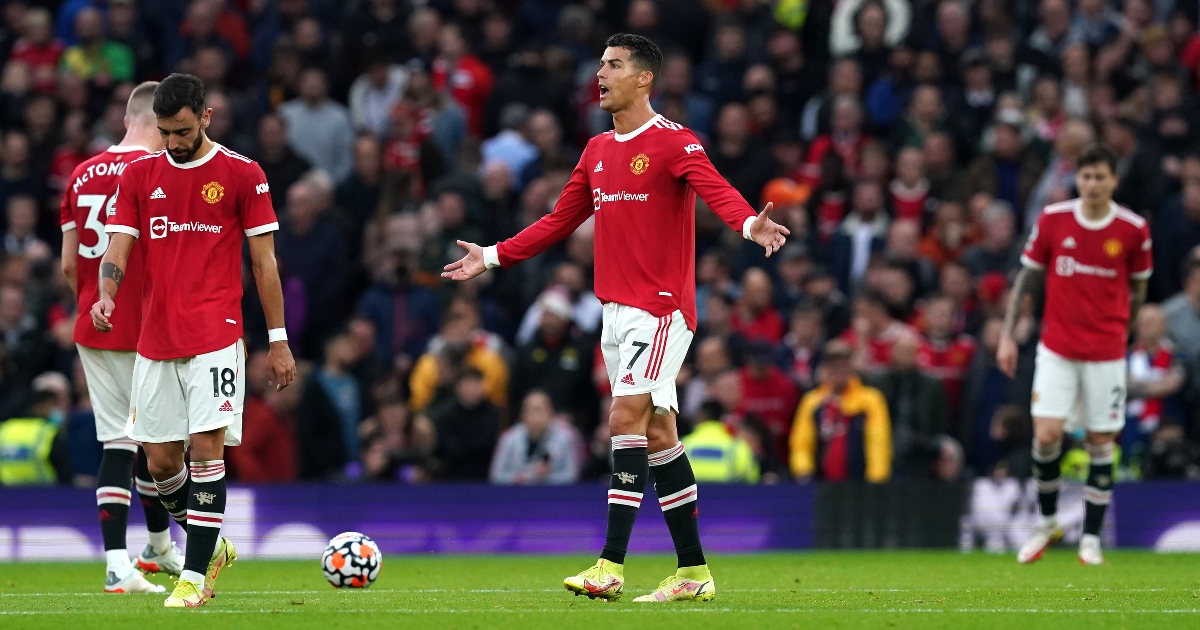 Cristiano Ronaldo is causing problems at Manchester United again. The pool of potential new managers is shrinking with each exhibition of his ego.

United were 1-0 up against Young Boys and Ronaldo, having scored, was seen standing next to Ole Gunnar Solskjaer on the touchline, flailing arms and shouting at players and officials. It was the first instance of many subsequent showings of what some brush off as passion and a desperation to win, and others see as a complete lack of self-awareness and overbearing egomania.

Sulking on the bench, storming off down the tunnel, getting angry at teammates for not passing to him, urging his fellow players to ‘support Solskjaer irrespective of his tactics’. All these moments paint a picture of a narcissistic prima donna, the likes of which we wouldn’t like to share a coffee with, let alone a training field.

Whether those stories are true doesn’t really matter. From the outside looking in, Ronaldo has made United a less pleasant place to work, and when it comes to prospective managers to replace Solskjaer, his mere presence has thinned the herd.

That is a bit weird. He’s one of the greatest footballers the world has ever seen, almost certainly the greatest professional. Any manager should jump at the opportunity to work with someone like that. But it just looks as though he would be incredibly draining to work with.

The fact that Ronaldo is even included in the list of odds to replace Solskjaer gives a fairly clear indication of the bookmakers’ thoughts – and therefore the views of the wider public – as to who holds the power at United. The fact that he’s sixth favourite at 25/1 with two of the bigger bookmakers strengthens that view and illustrates just how few options are deemed viable for United. Only Brendan Rodgers, Zinedine Zidane, Mauricio Pochettino, Erik ten Hag and Ralf Rangnick are thought to be more likely than Ronaldo to be the next United boss. In the absence of managers capable of handling, or willing to put up with, Ronaldo, just let Ronaldo himself do it.

Gone are the days when managers were all-powerful – stamping their authority and refusing to bend. There is now room for more than one voice in the dressing room, and to not call on Ronaldo’s experience would be a great waste. But the manager needs their voice to resonate, to be heard above all others to avoid a situation where Ronaldo’s teammates are following him blindly into battle with little more than a few buzzwords from a great footballer, rather than with strategy and method from a great tactician shrinking in the corner.

We’re not talking about Solskjaer, of course, but about Graham Potter, Erik ten Hag, or any other manager with tactical nous but a perceived lack of clout, whether due to a sub-standard playing career, managing in a league deemed unworthy, or any other foible that would allow the media to pull at a thread of disrespect.

Just imagine Potter, a man just ten years Ronaldo’s senior, who’s managed Ostersund, Swansea and Brighton, turning up at the United training ground and telling the five-time Champions League winner that if wants to be in his team he has to press the ball. It won’t happen; it can’t happen. And that’s a shame.

We’re not saying Potter or any other candidate that Ronaldo has made unworkable would be the answer to United’s problems, but they could have been, and now they can’t be given that opportunity without a vow to bow to Ronaldo’s every desire. In the absence of respect, pandering would be the only recourse. Yes, Mr Ronaldo. Of course, Mr Ronaldo.

But it’s not just someone of Potter’s relative inexperience that would have to prove themselves to Ronaldo. Rodgers, Ten Hag, Rangnick, even Pochettino, would first have to meet the Ronaldo challenge head on before working out how to win games of football. With Antonio ‘no sh*t taking’ Conte going to Spurs, it’s not quite Zidane or no-one, but it’s not far off.

Some will say that if a manager doesn’t have the wherewithal to manage Ronaldo effectively then that manager isn’t right for Manchester United. Those will likely be the same people that brush off Ronaldo’s lack of pressing and refuse to accept that a man that good at scoring goals could be flawed in any way whatsoever.

Jamie Carragher predicted Ronaldo would “cause more problems than he solves” at United. That’s more a matter for debate on the pitch, where goalscoring can make up for all manner of ills. Off the pitch is a different matter. Unless United can persuade Zidane, Solskjaer may as well remain in charge, as almost anyone else would be ‘the manager’ of Ronaldo’s Manchester United.