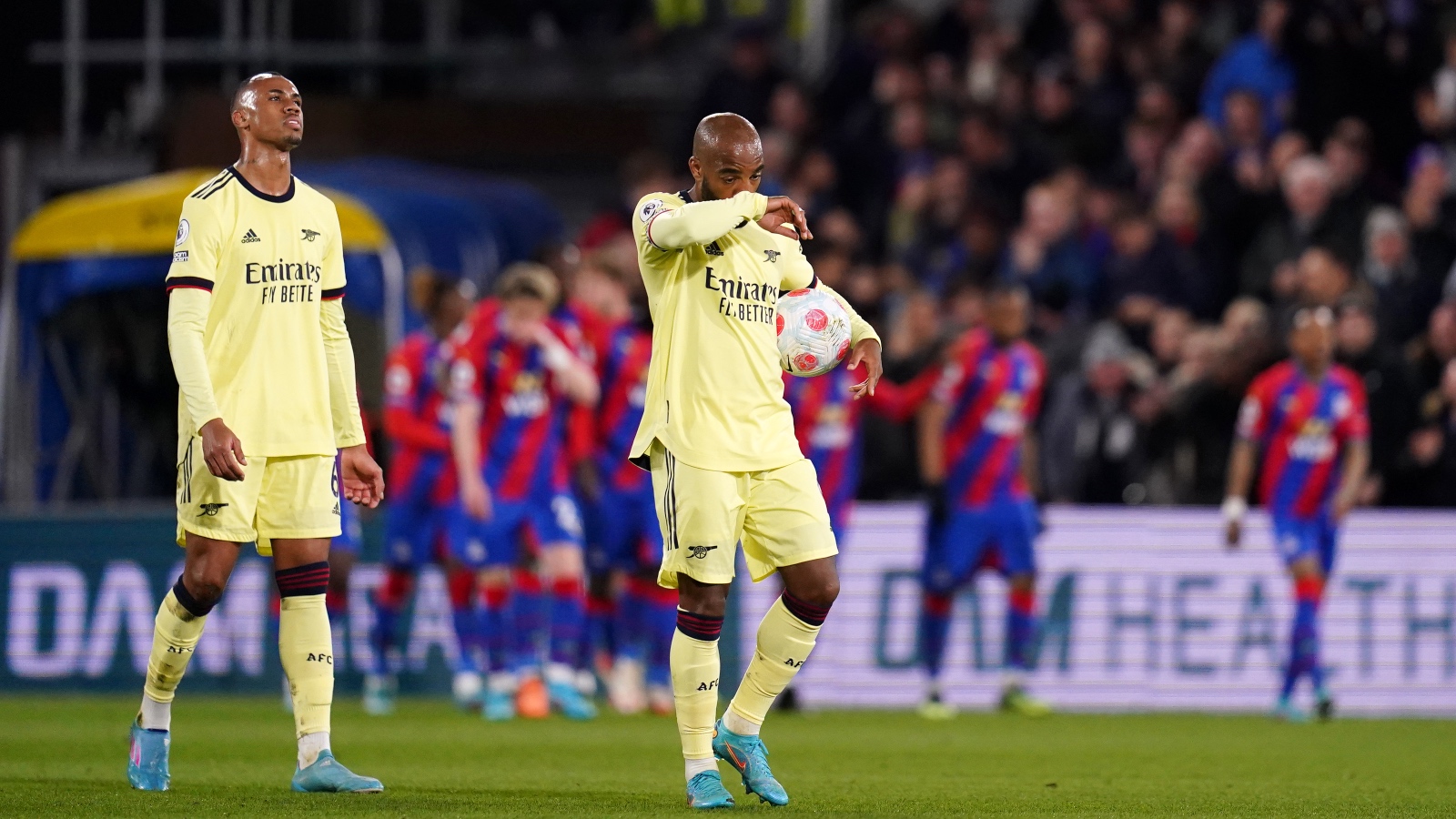 Arsenal were back to their very worst, at the worst possible time. They must forget, but Palace will be reliving this one for a while…

‘It’s just not clear what the plan is. The Arsenal players don’t seem to know what to do.’

‘Crystal Palace were just better. Better on the ball; better off the ball.’

What was true in October was also true in April. The reverse fixture saw Arsenal claim a late point, but they came away from Selhurst Park with nothing on Mondayand deserved less than that. It’s a nothing that could be very costly in their hunt for a place in the top four.

It was a night to forget for Mikel Arteta’s side, who were overawed by the raucous crowd, outfought and outclassed by their opponents.

Arsenal offered nothing in the first half. Martin Odegaard was bad, Thomas Partey was awful, Nuno Tavares was worse, but picking out individuals is cruel – they were all absolutely terrible. It was Arsenal at their most Arsenaly – weak, rudderless, bullied. They fell so far short of their excellent performance levels of recent weeks. Arteta looked livid throughout.

Jean-Philippe Mateta spent the game tormenting each member of the Arsenal back four in turn, beating one for pace, the next for strength, and so on. Wilfried Zaha was genuinely laughing at Cedric Soares’ attempts to defend him in the first half.

Gabriel and Tavares combined to take a share of the blame for the two opening goals. Gabriel misread the flight of Conor Gallagher’s free-kick as Tavares weirdly ducked to allow Joachim Andersen to climb over him to inadvertently assist Mateta. Gabriel then dashed out of defence to cut out Andersen’s through ball for Jordan Ayew, while Taveres failed to track the goalscorer’s run.

Palace swarmed all over Arsenal in the first 30 minutes. Gallagher was everywhere once again, but Ayew, Zaha and Mateta all played their part in a high press to which Arsenal had no answer. The Arsenal passing at the back and into midfield was nervy and frequently poorly weighted or misplaced.

While last season Palace were not a team set up to test or take advantage of defensive sloppiness, they are now among the best around. They didn’t give Arsenal a moment’s peace.

Arsenal were a lot better in the second half, but that was more an illustration of just how bad they were in the first rather than an indication that they were actually that good. They had chances and should have scored, but as Eddie Nketiah’s fine curling effort came back off the corner of post and bar, it felt like they never would.

It was right that Zaha put the game soundly to bed (though the Palace fans will be up for a while) – winning, then emphatically converting a penalty. Having robbed Partey in midfield – who was by that point actually injured rather than just playing like he was – Zaha beat Gabriel with one touch, ran into the penalty area with a couple of stepovers, diddled three Arsenal defenders, before having his legs swiped from under him by Odegaard.

Back in October I wrote: ‘It was the sort of game that will have Arsenal fans wondering whether they would prefer Patrick Vieira in their dugout to Arteta.’

And while doubts over Arteta at Arsenal have been replaced by praise and excitement in the main, with the Spaniard implementing a style of football that’s working with the young players he has at his disposal, no fans in the Premier League will be more excited by their manager than the Holmesdale lads and lasses. Arsenal have come a long way this season under Arteta, but not as far as Palace under Vieira.

Arsenal will have plenty of wounds to lick after this defeat. It’s the manner rather than defeat itself that could prove to be most damaging. With the relative lack of experience in the squad and coaching staff compared to Tottenham, and given that Antonio Conte’s side appear to be hitting their straps at the right time, Arsenal’s next two games against Brighton and Southampton are massive ahead of what promises to be a very tasty north London derby.

They must forget a night at Selhurst Park that’s joined a long list of memorable ones for the Palace fans this season.