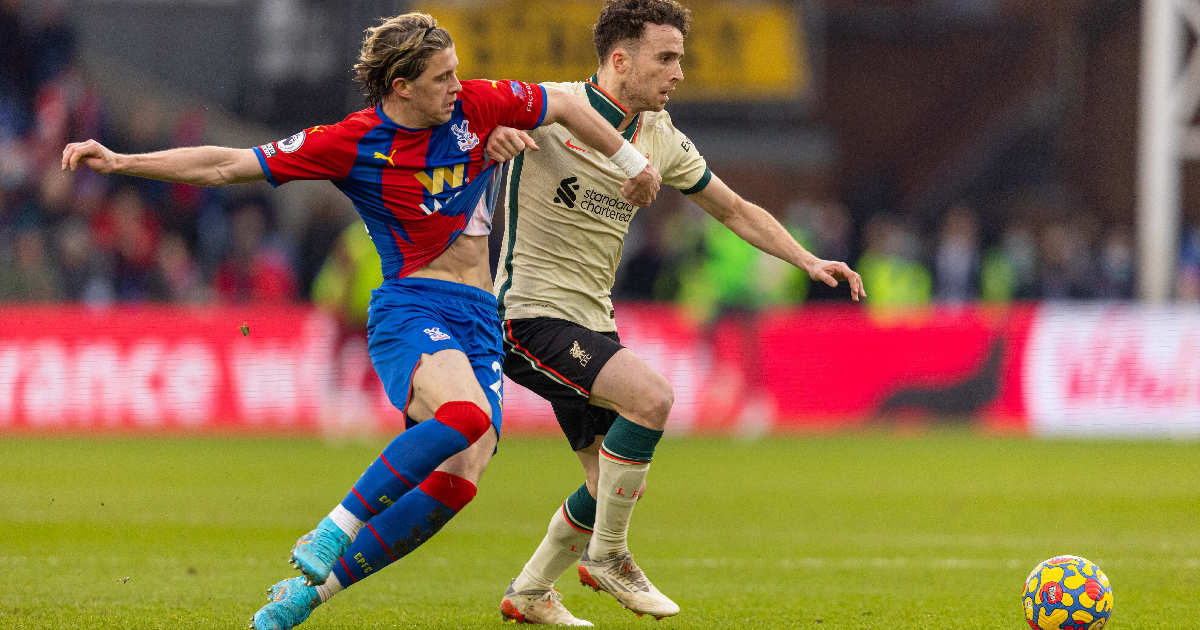 Crystal Palace have been undermined by inconsistency, from a glut of individual errors to an inability to put a winning run together.

Inconsistency appears in different guises. Some teams and players can play brilliantly one minute and then fall to pieces the next. Others can have a run of good matches and then a run of bad. But there are a small number of teams or players who can combine all the different types of inconsistency in one curiously infuriating package, and in the Premier League throughout the 2021/22 season, no-one else has been as inconsistent as Crystal Palace.

Palace have become the Premier League’s Dr Jekyll and Mister Hyde since Patrick Vieira took over as manager. They’ve only lost consecutive matches once – a run of three defeats in nine days from the end of November – but they’ve only won consecutive matches once too. They’ve drawn nine of their 22 Premier League games, and the 31 league goals is comfortably the highest total in the bottom half.

They’ve also been capable of a perplexing number of individual and team errors. Since Christmas, Wilfried Zaha has got himself sent off for two silly yellow cards in the space of a few minutes against Spurs, Luka Milivojevic has conceded a needless penalty against West Ham, Jack Butland has got the ball tangled up under his feet and ended up conceding against Millwall in the FA Cup, Joachim Andersen has scored a late own goal against Brighton, and Virgil Van Dijk has been given the freedom of South Norwood to head Liverpool into an early lead at Selhurst Park.

Indeed, the only game of the six they’ve played since Christmas in which they didn’t make some sort of significant individual or defensive error was against Norwich City, and that was primarily because Norwich barely got themselves into anything that could be even charitably considered to be an ‘attacking’ position. But the 3-0 scoreline suggested how good Palace can be when they’re in the mood, if only they could iron out a tendency towards bad decision-making.

And when they’re in the mood, they’re very, very good indeed. They’ve logged ten different goalscorers, of whom seven have scored more than once. Their top goalscorer is midfielder Conor Gallagher, and they can produce goals from across their midfield or attacking positions. And while the likes of Zaha and Jordan Ayew are now approaching or already past the age of 30, there are youngsters coming through such as Michael Olise, who was the EFL Championship’s Young Player of the Year last season while playing for Reading, and whose second-half performance against Millwall in the FA Cup was enough to rescue a match that looked like it was slipping away from them.

The fact that they are playing attractive football seems to be buying head coach Patrick Vieira a degree of goodwill in his first Premier League managerial position. After 22 games Palace are on 24 points, and although the general consensus seems to be that they are moving in the right direction, it should also be noted that at the same stage of last season they had 29 points and were in the same position in the league table.

In terms of results, then, this isn’t a great deal different to last season. But in terms of the actual football, the changes made since Vieira don’t feel like stagnation, and that certainly seemed to be the case in the dying months of Roy Hodgson’s tenure with the rebuild needed on an ageing squad following his departure from the club. For all their occasional brain-melts, it would be difficult to imagine Vieira’s Palace team losing 7-0 to Liverpool, as they did during Hodgson’s last season in charge.

The return of crowds to matches may also have a role to play in this change in perception too. Selhurst Park can be one of the liveliest grounds in the Premier League on its day, and the return of crowds after more than a season and a half has been most welcome. It seems at least possible that some of the residual goodwill has been transferred to Palace, whose supporters have certainly been going out of their way to make their home matches a unique experience.

On the pitch, Vieira still has lessons to learn. No other team in the Premier League has conceded as many goals from set-pieces as Crystal Palace, and their relative lack of size and physicality also seems to count against them, as could be seen by the way in which Virgil Van Dijk was allowed to arrive unmarked at the far post for the opening goal in the match against Liverpool.

They also seem to have a tendency to be slow starters. At home against Liverpool they were two down by half-time and against West Ham it was three. Getting into that position makes the likelihood of taking anything from a match considerably slimmer, and when it happens in two successive home matches that starts to look like an issue, especially when we consider that Palace haven’t yet come from behind to win a match under Vieira.

And there is also one big unanswered question about the team’s immediate future. Conor Gallagher has been their undeniable break-out star this season, but he is only on a season-long loan from Chelsea, and his form has been such that his return to Stamford Bridge at the end of the season now seems inevitable. Regardless of where Crystal Palace finish this season, his departure will leave a huge whole in the centre of their midfield, unless Palace can find an ungodly amount of money to entice him to stay, and even that would be far from certain to succeed.

But if all of this sounds negative (and it isn’t; there’s plenty to love about this Crystal Palace team), then at least they seem to have come through a necessary period of change relatively unscathed. They lost a manager and a lot of players at the same time. The required rebuild  was not inconsiderable and might easily have gone wrong, and pre-season previews predicted a narrower brush with the relegation places than we’ve seen so far. With two wins from their last ten league games, some may be concerned that they could yet slide closer to the foot of the table, but this seems unlikely. Inconsistency has been Crystal Palace’s calling card this season, and if fans feel that they’ve been seeing rather too much of Mr Hyde over the last few weeks, it’s likely that Dr Jekyll will make his return sooner rather than later.