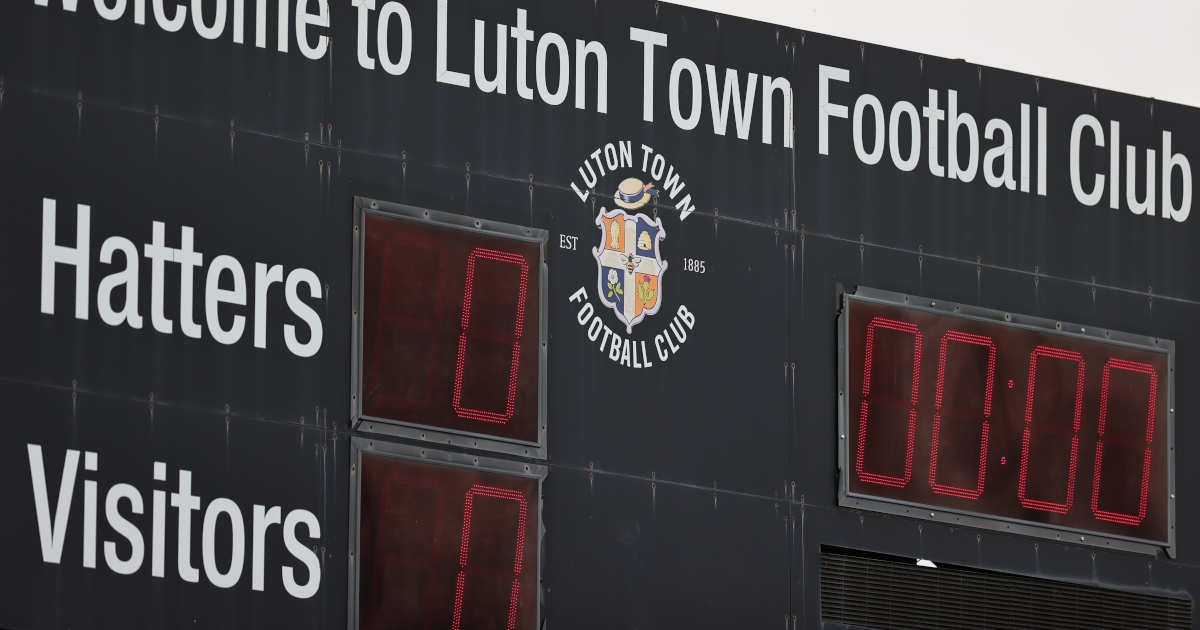 Derby County are staring down the barrel of a gun at the moment, but Luton Town are proof that even the worst circumstances can be survived.

So Derby County entered into administration, then, and the 12-point deduction they’ll receive for doing so may not be the end of their troubles. Derby were already facing a further deduction, rumoured to be nine points, for irregularities in their account practices, and now that they are in administration it wouldn’t be that surprising to see the suspended three point deduction for not paying their players on time also come in. There have even been suggestions that there are further skeletons in the club’s closet to be revealed.

At this point, things may well seem close to hopeless for Derby supporters, but there is an example from the history of the game of a club which which was buffered by a combination of external economic factors, dreadful management and a huge points deduction from which, rather than expiring from the accumulation of problems that they were facing, they eventually managed to pick themselves up and get back to where they are today.

Luton Town came extremely close to snatching a place in the inaugural Premier League, only getting relegated from the top flight on the last day of the last season before it started in 1992, but by the start of the new century they were struggling and the ITV Digital collapse of 2002 proved to be their tipping point. Losses were topping £500,000 per month and the club was facing the very real possibility of extinction.

Chairman Mike Watson-Challis eventually sold the club for £4 to what was reported to be a consortium fronted by a businessman called John Gurney. Gurney certainly had an interesting past. He’d been one of ten people charged with conspiring to import cocaine in February 1999 following a police raid that uncovered 472 kg of the drug in a lock-up garage in Leigh-on-Sea, for which he’d been remanded in Winchester prison.

Gurney was acquitted following a trial in which the prosecution declined to provide any evidence, but there were other warning signs, too. His 1999 arrest ended plans to buy Conference club Farnborough Town, but he did acquire Bedford Rugby Club club for £1 from boxing promoter Frank Warren, sacking the head coach and slashing salaries. He attempted to merge the club with Coventry and then move it to Ashford, before claiming that someone had taken control of the company that owned the club without his knowledge and had sacked the head coach. After an attempt to sell Bedford to Coventry City Football Club was blocked by the Rugby Football Union, Bedford residents managed to purchase the club for £750,000.

Gurney wasn’t short of ideas for Luton Town. He considered rebranding the club as London Luton FC to match the local airport, or merging it with Wimbledon, and claimed to have plans to build a new 70,000-seat stadium which would be hoisted on stilts over the M1 motorway at Junction 10 and would host formula one motor racing and baseball. Immediately, Gurney infuriated supporters by sacking popular manager Joe Kinnear, and fans quickly organised themselves into a supporters trust, called Trust in Luton, to push back against him.

By the summer of 2003, Luton were on the critical list. The fans were boycotting season ticket sales, with only 1,000 purchased and with more queries coming through from purchasers asking how to get their money back than there were sales enquiries. Gurney reacted to this in the only way he knew how: with a money-making scheme. He created a phone vote to appoint Luton’s new manager, charging 50p per call to a premium landline, saying that he didn’t like “being seen to give way to the mob so we’ve come up with the idea of Manager Idol based on Pop Idol” with a list of eight candidates for fans to vote on, later whittled down to three – Mike Newell, Kinnear and Steve Cotterill.

What happened next became legendary. It was clear that Gurney wanted Newell in as the new manager, but Cotterill said he wasn’t interested anyway and, when the results came in heavily supporting Kinnear (who received 82% of the vote but had also ruled himself out of contention because he didn’t want to work with Gurney), Gurney lied about the votes cast and announced Newell as manager anyway.

By the start of July, it was clear that Luton’s crisis had only been exacerbated by the sale of the club to Gurney. The supporters trust had successfully convinced supporters and local sponsors to boycott season tickets and club sponsorship and instead pledge almost £300,000 towards them, while no-one at the club had been paid a penny since Gurney arrived. The EFL placed Luton under a transfer embargo, also withholding television and league sponsorship money due to the ongoing uncertainty over the details of the club’s ownership structure, citing ‘grave concern’ with the set up after a meeting with Gurney where he refused point blank to provide any information about the ‘consortium’ of backers that was supposed to be behind him. It is now widely believed that there never was one.

But the Trust had an ace up their sleeve. It acquired shares in the club’s major creditor, Hatters Holdings, an offshore company that was owed several million pounds. Now in control of Hatters Holdings, the Trust then placed Luton Town into administrative receivership. Gurney was out after just 55 days running the club. “If they expect me to walk away from Luton with nothing, I’ll make very sure there’s nothing to walk away from,” was his typically charmless comment at the time.

The club sold 3,200 season tickets and announced new shirt sponsors in the first week after his departure.

Luton Town were rescued in May 2004, when a group fronted by former chairman Bill Tomlins bought the club, but this was far from the end of the story. They were promoted back into the Championship in 2005, but in April 2007 Tomlins resigned his position following an FA investigation into irregular payments made to agents by the club’s parent company, and by November Luton were back in administration – for the third time in nine years, and with a ten point deduction for doing so – while plummeting towards League Two.

The authorities’ patience ran out. A new consortium called Luton Town Football Club 2020, with broadcaster and Luton supporter Nick Owen named as chairman and Gary Sweet, who’d been one of the founding members of Trust in Luton, named as CEO, had formed to take the club out of administration. But they couldn’t agree terms with HMRC and in June 2008 they were docked ten points over the illegal payments and 20 for failing to reach a CVA. They were denied any right to an appeal against what remains the biggest points deduction ever given out to an EFL club.

Luton Town started the 2008/09 season staring relegation from the Football League in the face. The 30-point deduction meant that they were going down unless they could show promotion form all season, and this proved a step too far. They finished 15 points from safety and were mathematically relegated on April 13, 2009, ending 89 years of league football at Kenilworth Road.

But they did enjoy one valedictory moment that season. Eight days before their relegation was confirmed Luton took 40,000 supporters to Wembley for the final of the Football League Trophy and beat Scunthorpe United 3-2. Two days after this, John Gurney was declared bankrupt at the High Court in London.

It took Luton five years to get back into the EFL, but at least the club was finally under the ownership of people who cared deeply for it. In 2013 they became the first non-league club to win away at a Premier League club in the FA Cup when they beat Norwich City 1-0 at Carrow Road in the fourth round. The following year, Luton Town returned to the EFL by winning the National League by 18 points, running up 101 in total and scoring 102 goals. The careful husbandry of the new owners took Luton to successive promotions in Leagues Two and One in 2018 and 2019, and the club ended up back in the middle of the Championship.

Derby County supporters reading this may well be forgiven for thinking, ‘Well, this doesn’t sound particularly great to me,’ and that’s understandable. Luton Town were shunted from pillar to post for years and were ultimately let down by the game’s governing bodies, who punished the club’s new owners for the sins of their predecessors. But if Derby County can make the leap from being in administration to being the club that Luton became once LTFC2020 took control they’ll be set fair, because the ultimate truth of running a football club is that the harsher the environment is, the more important it is to have people who have both the passion and the competence to run the show. The darkest hour is just before dawn, after all.

Those interested in the John Gurney story may be interested to watch this edition of Trouble At The Top from 2003, which goes into greater detail about that chaotic summer at Luton Town.