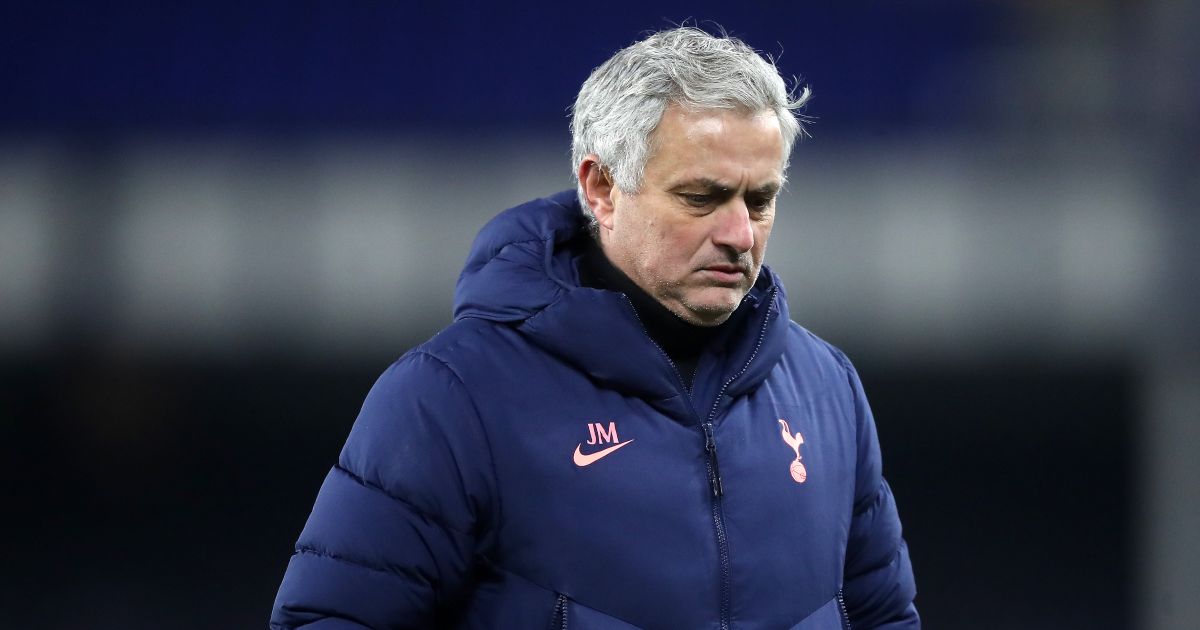 What was once a “disgraceful” scoreline by the standards of Jose Mourinho is now entirely out of his control at Tottenham.

The problem with engaging in constant psychological warfare and nefarious mind games for decades is that eventually you end up punching yourself incessantly in the face just to feel something. When everything you say is kept on permanent and public record, contradictions are inevitable. The more incendiary the initial message, the greater the ensuing hilarity when it inevitably backfires.

The passage of time does nothing to dim that, as Jose Mourinho kindly confirmed on Wednesday. By his own admission over 16 years ago, what transpired at Goodison Park in the FA Cup fifth round was a debacle not belonging to this sport.

“In a three-against-three training match, if the score reaches 5-4 I send the players back to the dressing rooms as they are not defending properly. So to get a result like that in a game of 11 against 11 is disgraceful,” he added, dismissive of Arsenal’s nine-goal north London derby victory a day earlier.

Few would blame him for saving time and recycling those quotes to sum up the FA Cup fare at Goodison Park. Tottenham, with their born winner and trophy guarantor, are out of the competition in the fifth round. Everton and Carlo Ancelotti stumble into the quarter-finals.

The centre-half, suffice to say, scored twice from set-pieces.

Tottenham either failed to or simply could not be bothered to track their former player’s movement all evening. Sigurdsson enjoyed the freedom of Merseyside to provide the clever flick for Dominic Calvert-Lewin’s equaliser, to thread Richarlison through to make it 4-3 and to find Bernard with a delightful chip that ultimately decided the tie.

His return to prominence has been a welcome development for the Toffees, Abdoulaye Doucoure and Tom Davies providing a wonderful midfield platform from which the Icelander could further elevate this game. The arrival of players like James Rodriguez really does sharpen or dishearten others through competition. In Sigurdsson’s case it has pushed him on.

It would be remiss not to mention the specific instances of defending that the Mourinho of old might have considered “disgraceful”. Pierre-Emile Hojbjerg was surprisingly culpable, so determined was he to pass out from the back that he failed to notice Doucoure’s looming and pressing presence. 1-1. A total of 447 seconds and one defensive collapse later, the deficit was 3-1. Sanchez completely loses Richarlison’s run. 4-3. Two players mark Richarlison while Bernard sprints into the area unmarked as Matt Doherty plays him on. 5-4.

An optimist would point out that Tottenham scored four goals, two with Harry Kane on the bench and only one with him involved. The visitors were excellent in the opening half-hour, playing some quite wonderful, quick, one-touch football with purpose. It was refreshing. It was promising.

A pessimist might suggest that the subsequent defensive slump renders all of the above moot. Mourinho will revert to an unambitious, entirely cautious style in a direct response to the sort of individual and team mistakes he can neither control nor otherwise legislate for.

Anyway, something to disagree with: that Tottenham defence is bad, but it's not uncoachable and shouldn't be described as such.

There is a balance, of course. It is possible to be adventurous in attack without exposing the defence, and stable in defence without isolating the attack. This insistence that the two are mutually exclusive is counter-productive. Mourinho’s sole focus will be on the five and not the four when a more trusting, holistic manager would still address the former while simultaneously harnessing the latter.

There’s the problem: in the seven Premier League games Tottenham played after drawing 3-3 with West Ham in October, only once was there more than two goals. Mourinho will react to this, but not in the way some might naively hope.