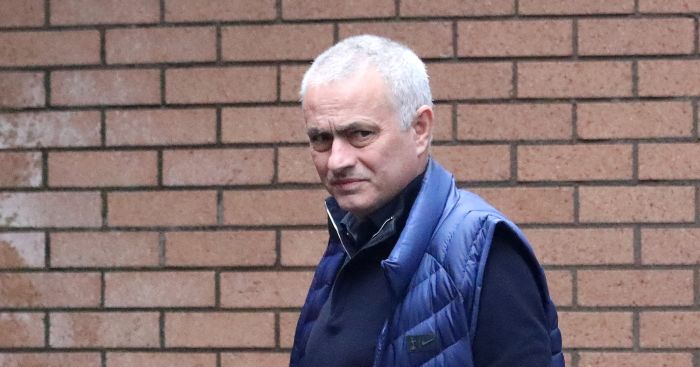 It’s 26 years since Ossie Ardiles unleashed Tottenham’s ‘Famous Five’ formation on the Premier League. On Saturday, Jose Mourinho wheeled out his own version at Turf Moor.

Five centre-backs. The dream. In the sort of performatively gloomy pre-match interview that, in a previous Mourinho lifetime, would’ve been hailed as genius mind games but has long grown as boring and predictable as his teams’ football, it was put to Jose that the presence of Toby Alderweireld, Japhet Tanganga, Davinson Sanchez and Jan Vertonghen in the side hinted at a midfield role for Eric Dier.

For the first and only time in the interview, Mourinho cracked a smile. “Wait and see.” The very idea that picking four other centre-backs would force Jose to push the fifth into midfield – how adorably naive.

No, Dier would take his place alongside (at least theoretically, although in fact generally either three yards ahead of or three yards behind) Alderweireld and Sanchez, with Tanganga and Vertonghen deployed as wing-backs. Defence is the one area where Mourinho has no real injury concerns, so into the team they go. All of them.

Who knows whether it was a genuine attempt to snuff out Burnley’s threat or just Mourinho trying to make some point or other, but it certainly didn’t achieve the former.

Spurs were already reeling and firmly on the back foot before three of those five centre-backs – along with returning keeper Hugo Lloris – played their parts in Chris Wood’s opener. Sanchez failed to deal with the threat of the excellent Dwight McNeil on the left. Dier failed to clear the resulting cross. Lloris failed to gather the resulting shot. Alderweireld failed to react to the resulting loose ball. Failed, failed, failed, failed. And Tottenham spent the rest of the first half failing.

After 23 minutes, Tottenham’s five (5) centre-backs had allowed nine (9) attempts on goal. The three centre-backs actually playing as centre-backs offered no evidence they had ever before so much as trained alongside each other as Spurs somehow escaped a first-half mauling only 1-0 down.

The five centre-backs were constantly outnumbered. On the few occasions Spurs did get into Burnley’s half, a narrow front three was held at arm’s length with embarrassing ease. Oliver Skipp and Tanguy Ndombele – who Mourinho threw under the bus after the game in another cynical interview in which he named him by not naming him – were an irrelevance.

Lucas Moura and Giovani Lo Celso replaced that anonymous midfield duo at half-time, Dier finally moved into the middle of the park (and as far away from the fans as possible) and Spurs duly improved. They could hardly fail to do so. Mourinho does deserve the tiniest amount of credit for the changes but, however much he might want to pin the blame on Spurs’ record signing – and there’s no doubt Spurs need so much more from him – Ndombele didn’t pick that absolute mess of a starting XI. Still, it’ll probably create enough of a distraction for Mourinho’s own mistakes to escape the censure they deserve.

You can’t hope for a player to charge into the stands to protect his brother after every game; sometimes you have to be proactive and create your own diversions. It’s why Mourinho earns the big bucks.

Look, I’m doing it now just by writing that paragraph pointing it out. Let’s get back on track. Where were we? That’s right: Jose Mourinho picked five centre-backs at Burnley, who then had nine attempts on goal in the first 23 minutes. Five! Nine! Twenty-three!

Maybe this was just what Mourinho prioritising Leipzig looks like. Who knows, frankly. Certainly they will need Lo Celso for that one and, right now, all the other ones. He is currently Spurs’ one bright light in a sea of churning shod. Spurs were a different and better side after his introduction. But overall it was marginal improvement from a staggeringly low base.

Spurs weren't completely dominated in the second half but it'd be strong to say they were good pic.twitter.com/QbVvqTqjTG

Make no mistake, Spurs’ second half was no more than competent. Nobody connected to the club should allow Mourinho to gaslight them into thinking it was anything more than that. For all Lo Celso’s busy progressive excellence and Lucas’ running around, Spurs mustered no further shot on target after Dele Alli’s 50th-minute penalty.

Maybe Mourinho isn’t the loser in all this. He got his point and got to make one. Maybe it’s Spurs who are the losers for being the canvas at which he currently flings his shit.

Or maybe the losers are Burnley, who will be absolutely kicking themselves for failing to make their utter first-half dominance truly count and still created far, far more in the second half than Spurs had in the first.

Perhaps it’s fitting that nobody really walks away happy from Turf Moor having all been sucked into Mourinho’s black hole. But at least Burnley won’t have to watch Spurs again this season. The real losers are surely the Spurs fans who have already watched the full Mourinho narrative arc play out in record time, and have now seen him take a dump on the club’s record signing, and still don’t yet know how much more of this there is to endure or indeed whether today’s execrable first half even represents the lowest point.