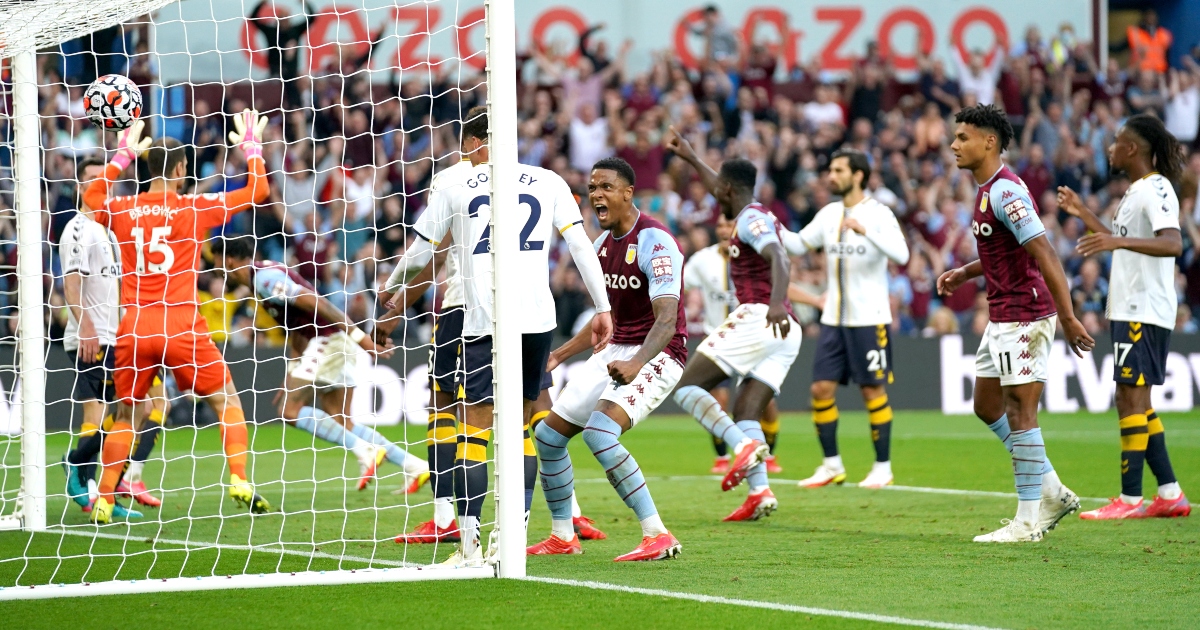 Lucas Digne spoke this week of the need for Everton to do their talking on the pitch. His performance spoke volumes…

Lucas Digne made a perfectly valid point about the need for Everton to seek consistency after a fine start last term fizzled out far too quickly.

“Last season, we spoke maybe a bit too much because we said we wanted to finish fifth or sixth. We have the quality; it’s now about showing that on the pitch and not talk as much.”

So today at Villa Park was an unfortunate time and place for Digne to be liable in Everton’s first Premier League defeat of the season and Rafa Benitez’s first loss in front of the Holte End.

The France defender was caught unaware of Matty Cash’s run for Villa’s opener; he flicked Leon Bailey’s corner into his own net for the second; and lost a duel with Danny Ings on the halfway line which allowed the striker to assist Bailey with his first Premier League goal.

Digne’s level of culpability diminished slightly with each goal Everton conceded but this was certainly no captain’s performance on a day Benitez needed his skipper to lead by example.

The Toffees were only able to name eight substitutes with injuries depriving the visitors of Jordan Pickford, Richarlison, Dominic Calvert-Lewin and Seamus Coleman. Benitez has spoken of his desire to strengthen his squad and the new boss can point to this result as evidence of the Blues’ limitations.

That lineup told you all you needed to know today.

– Our best CB who isn’t fit anyway at RB.
– Our backup striker who isn’t fit up top.
– Our most influential forward injured.
– Our best player sitting at home on COD.
– The bench.

We couldn’t afford to give away sloppy goals.

Benitez was restricted in his summer recruitment but he was able to source a couple of wingers. Demarai Gray and Andros Townsend lined up in the same XI as Alex Iwobi, making the Toffees a threat on the break, and for an hour at Villa Park, they were more than holding their own.

But once Digne allowed Cash to run on his blindside, the Toffees melted.

The Everton skipper has been lauded for his attacking contribution since joining from Barcelona in 2018 but such basic defensive errors will concern Benitez far more than his diminishing creative threat.

With Benitez relying heavily on Gray, Townsend and Iwobi through the early weeks of the season, Everton’s full-backs are expected to prioritise their defensive duties, especially when the Toffees’ rearguard takes the shape of a back four.

Digne was not the only Everton full-back to struggle. But at least Ben Godfrey can offer the excuse of being a centre-back. And not 100 per cent fit.

So the last thing Godfrey needed after toiling for an hour was the sight of Bailey coming off the Villa bench.

The Villa new boy was only on the pitch for 21 minutes but that was long enough to earn the Man of the Match award. His introduction on the hour was a brave move, one Dean Smith should be commended for, with Matt Targett making way in a like-for-like swap of Villa wing-backs.

It saw the Villans snatch the initiative when the game was still delicately poised. Within five minutes, Cash timed his run to perfection while Digne was caught square as the ball was played into Douglas Luiz, who in turn fed the rampaging wing-back.

Prior to that, when the move started with Emi Martinez, both Cash and Bailey started high enough to be level with Villa’s centre-forward duo, occupying each member of Benitez’s back four, which demonstrated Smith’s intent.

Once Villa had that lead, they never looked like relinquishing it. Nor did Everton offer any sign of a recovery.

Benitez will point to this defeat as a reversion to the mean given his resources – in a wider financial context and the personnel available to him at Villa Park – and the unbeaten record the Toffees took to Villa Park. But the manner of it will irk the manager because of the role Everton’s sloppiness played in their own downfall.