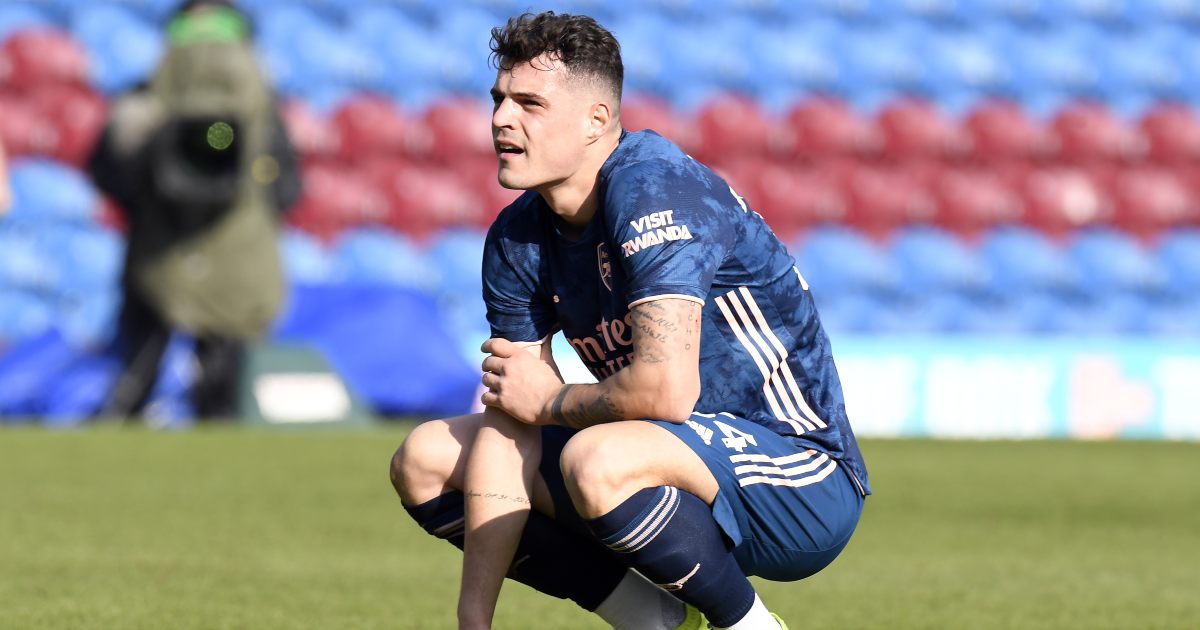 “We have to do it game by game [now]. Not for three games, not for four, we have to constantly be like this, with this energy, this team spirit and after I am looking forward to us doing something.”

That was Granit Xhaka urging Arsenal to start hitting some consistency after producing an impressive display to beat third-placed Leicester City last Sunday. Goals from David Luiz, Alexandre Lacazette and Nicolas Pepe secured a 3-1 win and a fourth victory in eight Premier League matches. Although the Gunners have tasted victory in 11 matches this season they have struggled to go on a run of consecutive wins and build up any kind of momentum towards the European positions. It has felt like one step forward and one back for most of this season for Mikel Arteta’s side.

It was the same story again at Turf Moor on Saturday but it should’ve been different. The Gunners went ahead in the sixth minute through Pierre-Emerick Aubameyang, who foxed the Burnley backline with two stepovers before drilling the ball past the outstretched Nick Pope. Arsenal should’ve gone into the break leading with Aubameyang twice laying on good chances for Bukayo Saka. Despite Burnley’s pressing high up the pitch, Arteta’s men were looking dangerous going forward and looked very comfortable at the back. But that all changed with two silly decisions on 39 minutes.

8 – Pierre-Emerick Aubameyang has scored more Premier League goals against Burnley (8) than against any other club, whilst only against Hamburger SV (9) has he netted more league goals in the top five European leagues. Quickfire. #BURARS pic.twitter.com/EuLZYNHru6

Bernd Leno thought it would be a good idea to play the ball to Xhaka inside his own 18-yard box with a Burnley player closing the Swiss midfielder down. The goalkeeper’s decision was strange given how obvious it was that Xhaka would’ve been under immediate pressure from a short pass, with the correct option to boot the ball up the field and away from danger. It’s all good playing it out from the back but sometimes it’s just better clearing your lines, no matter how your manager has told you to play. There was a still a long way to go before it ended up in the back of the net, though, with Xhaka’s attempted pass to Calum Chambers hitting Burnley talisman Chris Wood on the hip and ending up in the goal. Xhaka had been put in that position by his team-mate but the midfielder had to clear his lines. Instead, his poor decision-making was on show yet again for Arsenal as he and Leno cost them two points.

Xhaka, who talked this week about how social media is killing football, will no doubt be criticised again – but he was certainly not the only one to blame. Having said that, another Arsenal moment to forget for Xhaka highlighted just how many times he has cost the Gunners over the past few seasons. Since the start of 2016-17, Granit Xhaka has made more errors leading to goals (8) than any other outfield player in the Premier League.

8 – Since the start of 2016-17, Granit Xhaka has made more errors leading to goals (8) than any other outfield player in the Premier League. Disaster. #BURARS pic.twitter.com/VAzt53Z9sV

It’s real shame for the 28-year-old – who had been quietly winning over Arsenal supporters – that he’s stuck his foot in it again with another high-profile gaffe. Naturally, he will be blamed more than Leno by a large chunk of supporters having told them to “f**k off” as they jeered him following his substitution during a draw with Crystal Palace last season, whereas Leno rarely raises his voice in public. Xhaka’s general play, however, was good, with he and Partey complimenting each other in a midfield two with Martin Odegaard playing just in front of them. Leno partly redeemed himself too with some good second-half saves as Burnley came out with fire in their belly after their fortunate equaliser.

There were a lot of good things to highlight today from Arsenal – who made five changes from the win at Leicester – but they are their own worst enemy at times. It must be a frustrating watch as an Arsenal fan at the moment knowing that you are likely to concede a completely avoidable goal most weeks. The introduction of Nicolas Pepe and Alexandre Lacazette late on sparked the Gunners into life but numerous chances went begging. The Gunners have one more point on the board but it’s not enough for a top-four finish and might not be enough for Europa League qualification. They need to string three or four wins in a row together if they are to have any chance of climbing away from their mid-table mediocrity. Cut out the silly mistakes and they will give themselves a great chance.