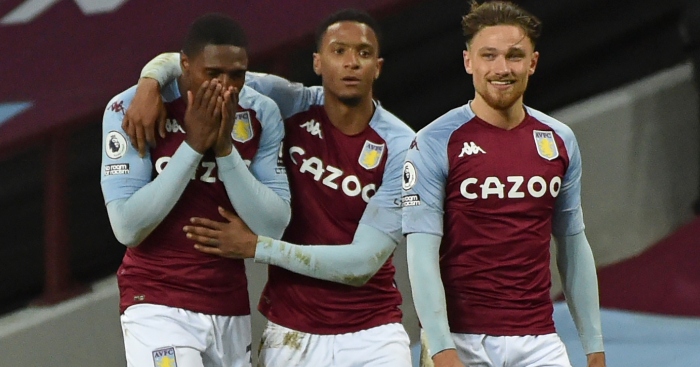 “Few teams attack with that Villa verve… there might not be a more varied front line in the country.”

That was Matt Stead’s conclusion from Aston Villa’s 3-0 win six days ago. Such flair was evident again in another three-goal victory, though this latest triumph against Crystal Palace showcased more the incredible defensive resilience that Dean Smith has installed in the Premier League’s most-improved unit of 2020.

Villa achieved their fourth consecutive clean sheet, their eighth in 13 games of this campaign surpassing their tally from the whole of last season, to leave them only a single concession behind the Premier League’s stingiest defence, Manchester City.

In five months, Smith and his staff have transformed Villa from the second-leakiest rearguard to the second best. There is plenty of credence in the theory that it was achieved by moving Villa from the back foot to the front by surrounding Jack Grealish with the level of talent he deserves around him, but their latest shutout was testament as much to their new-found solidity at the back.

And it was achieved in the most part without the individual in the back four who most often catches the eye.

For a centre-back like Tyrone Mings*, that should not be taken as a compliment. The England defender was in the spotlight yet again when he took Wilfried Zaha’s bait twice in six minutes just prior to the break. ‘F***ing embarrassing’ was Grealish’s immediate reaction, though his criticism for referee Anthony Taylor would be more apt if it was aimed at his dismissed team-mate.

Few defenders in Premier League split opinion like Mings. The 27-year-old, who has earned four England caps since his debut just over a year ago, has all the physical attributes to be one of the first names on Gareth Southgate’s team-sheet and Mings has emerged as one of the leaders of this Villa squad. He has been an ever-present in Smith’s side this season, but for all his speed and strength, Mings cannot seem to outrun the air of calamity that too often descends upon him.

It didn’t matter today. Given Ezri Konsa’s form, you might put forward the former Brentford defender as Villa’s best centre-back and it was he who replaced Mings in the back four, at the expense of the first-half’s best player, Bertrand Traore, who opened the scoring, hit the post and carried the biggest threat.

Konsa was on the bench after illness ruled him out of the previous two games, which is another indicator of the strength of depth Smith has assembled in his squad. Kortney Hause replaced Konsa against Burnley nine days ago and the former England Under-21 international has played his role in the most recent three of Villa’s clean sheets, as well as netting the crucial second goal today which saw Palace wilt.

4.4 – Despite playing with 10 men for the entirety of the second half, Aston Villa amassed an expected goals total of 4.4 against Crystal Palace, the highest single-game return for any side in the Premier League this season. Undeterred. pic.twitter.com/EBbJpbnu4k

Hause and Konsa’s resilience was matched by the full-backs to their right and left. Matty Cash has settled at Villa as quickly as keeper Emiliano Martinez while Matt Targett this season has displayed the assuredness that was missing for much of last season. He made more tackles than anyone else against Palace and though, like Konsa, he took his time to acclimatise at Villa Park, now they have, Smith’s defence is as tight as they come.

For that, the credit should be spread further than the five at the back. Ollie Watkins sets the tone from the front and despite failing to score with 10 efforts on goal, his sixth goalless game in succession, the Villa centre-forward was a deserving recipient of the Man of the Match award. Grealish chases in tandem with Watkins, evidenced in the fact that he recorded a game-high seven blocks, while Villa’s defensive screen, John McGinn and Douglas Luiz, possesses a perfect blend of fight and flair.

Villa will need all their new-found solidity in the coming weeks. Their next five games see Smith’s side go up against Chelsea, Manchester United, Tottenham and Everton in the Premier League, with an FA Cup tie against revenge-seeking Liverpool sandwiched in the middle. But not for many a year have they looked better equipped to take on the big boys, which is a quite astonishing transformation.

Smith has received huge credit for making Villa’s attack one of the most exciting around and deservedly so. Even a man short, they were more adventurous and penetrative in their play than Palace. But the improvement at the back is worthy of even greater commendation.

*Buy Tyrone Mings and thousands of other players on Football Index. 18+, UK and Ireland customers only, begambleaware.org. T&Cs apply.