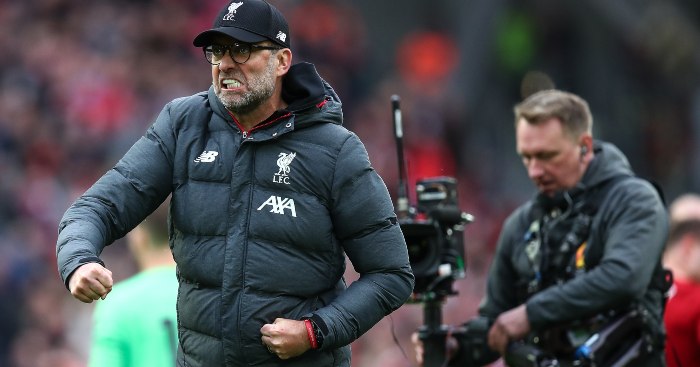 Liverpool ended the only bad week of their season by returning to winning ways while claiming for themselves another record. A victory over Bournemouth – yet another one – gave Jurgen Klopp’s men a 22nd successive home win, overtaking the previous best set by Bill Shankly’s Reds in 1972. But this was far from vintage Liverpool.

Klopp will maintain that the result is the only takeaway from this lunchtime meeting with a team that Liverpool have only ever lost to once. But Diego Simeone will draw a rather different conclusion when he watches the tape ahead of Atletico Madrid’s visit to Anfield on Wednesday.

Simeone might feel that he doesn’t need the help but Watford have provided a blueprint for beating Liverpool which Bournemouth tried to follow. Had it not been for a couple of daft mistakes, the 6-3-1 plan may have worked again.

Klopp’s concern was apparent in his agitation through a first half during which Liverpool trailed – unjustly, in their mind – then led thanks largely to Bournemouth’s repeated naivety rather than the hosts’ relentlessness. Before kick-off, Klopp urged Anfield to lift his players from their mini-slump but even the supporters struggled to get going in the early stages.

Callum Wilson was evidently more pumped up and whether or not his challenge which led to the surprise opener was a foul – the officials on the pitch and in the VAR cupboard 200 miles away thought not – Joe Gomez’s casual manner and Liverpool’s failure to recover their ground was typical of their recent form.

Fortunately for Liverpool, you can always rely on Bournemouth to shoot themselves in the foot and on this occasion it was Jack Simpson holding the smoking gun. A heavy first touch should have prompted a long pass or even a hoik forward – anything would have been better than attempting to dribble around Sadio Mane as the Cherries’ last man. Even then, Mane made life as difficult as possible for Mo Salah, but the Egyptian found the line between Jefferson Lerma’s legs and the bottom corner.

We already know that Bournemouth don’t catch on quickly and they were similarly guilty of faffing in the wrong areas just eight minutes later. This time it was on the halfway line but a similarly reckless turnover gave Virgil van Dijk a gaping chasm through which to play in Mane. This time his final product was rather more clinical, prompting Klopp to celebrate furiously behind the back of the linesman who had wronged him by not spotting Wilson’s push on Gomez.

That should have been the platform for Liverpool to put Bournemouth to bed and tuck them in, but for the remaining hour, their hesitancy was obvious. Their passing wasn’t as crisp as we have come to expect and their sloppiness in the final third will worry Klopp ahead of a Champions League tie in which they need to breach Simeone’s crack unit at least twice.

Liverpool have never taken a ‘throw sh*t at the wall’ approach to attacking, with a dozen teams in Europe’s top five leagues averaging more shots per game. But the Reds still fell well short of their usual standards, creating only 10 shots on Bournemouth’s goal. Aaron Ramsdale was rarely troubled and Jan Oblak will enjoy a stress-free trip to Anfield without Liverpool’s front three increasing their intensity and the midfielders behind creating more openings.

The best chance of the final hour, in fact, fell to Ryan Fraser and the Scotland winger beat Adrian, whose presence still doesn’t inspire confidence in those before him. But James Milner, in the side because of a late injury to Andrew Robertson, scurried back to hook the ball from underneath his own crossbar.

🗣 "Everything we do, highest tempo!"

Klopp's Lieutenant on the pitch!

Liverpool may be out of sight in the league but James Milner isn't about to let standards slip on his return the Premier League XI. pic.twitter.com/JhGX5mcmi3

That rescue act and Milner’s customary competence was enough to earn the man of the match award in the face of almost no competition. Milner caught the eye before kick-off too while cajoling his team-mates. “Everything we do, highest tempo,” he urged but those words apparently fell on deaf ears.

You can bet that whatever Simeone has to say will resonate far more with the Atletico players on Wednesday night.