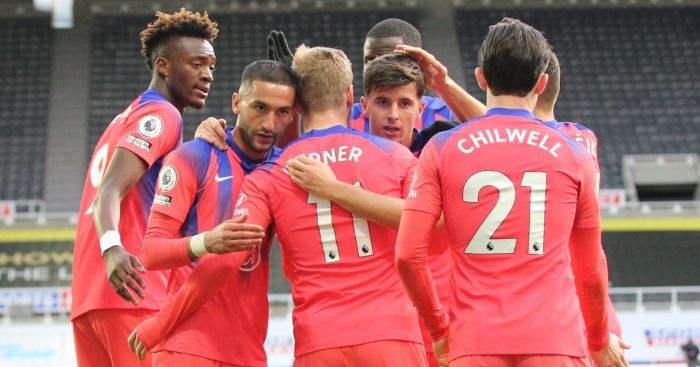 It was complete domination from Frank Lampard’s men at St James’ Park as Chelsea swept Newcastle United aside 2-0. It was a match that the Blues were expected to win but the scoreline could and should have been much greater.

For all the dangerous situations they created against the Magpies, Chelsea opened the scoring on Saturday in fortunate circumstances. Federico Fernandez, who struggled to sort his feet out, turned the ball into his own net from a lovely ball across the box from Mason Mount. Timo Werner had a couple of excellent chances to make the scoreline more comfortable before the interval but neither he, nor Tammy Abraham – who had a header saved by Karl Darlow – could add to their tally in the first 45 minutes. The Blues had become so comfortable on the ball towards the end of the first half that complacency almost got the better of them. Some sloppy passing crept into their game, allowing Newcastle to break on them on a couple of occasions – but the end product wasn’t there from Allan Saint-Maximin.

No team has scored more second-half goals than Chelsea in the Premier League this season and they increased that record against the Geordies. Another couple of missed chances later, Werner showed his class by charging through a gigantic hole in Newcastle’s rearguard to lay it on a plate for Abraham, who bagged off the post. That goal sealed as comfortable an afternoon of football as Chelsea are likely to have all season, with the Steve Bruce’s side rarely threatening Edouard Mendy’s goal.

The three points took Chelsea to the Premier League summit temporarily and announced them as contenders for the title. And so they should be. Over £200m was lavished in the summer on seven players, including Hakim Ziyech, Werner, Ben Chilwell and Kai Havertz. The main question mark hanging over Chelsea was whether all the new players could settle in quickly and whether Lampard could find his best XI in a sea of treasure. It took a few matches but Lampard looks to be there.

7 – Édouard Mendy has registered seven clean sheets in his nine appearances for Chelsea in all competitions, with today’s shutout his fourth in five Premier League games. Assured. pic.twitter.com/VyXwXMPRHv

The Blues conceded nine goals in their first five Premier League matches this term, picking up eight points from a possible 15. Since then, they have conceded just one goal, scoring nine and picking up ten from a possible 12 points. The gradual introduction of Chilwell, Thiago Silva and especially Mendy has seen Lampard’s defence improve dramatically, while Kurt Zouma and Reece James have upped their levels recently. Chelsea had the worst defence in the top half last term but it is now providing the foundation for a title challenge.

Only Liverpool and Manchester United have stopped Chelsea scoring this season with the west London outfit hitting the back of the net 22 times, the most in the Premier League by any club this campaign. Encouragingly, the goals are also coming from all over the pitch, with defenders, midfielders, wingers and strikers all chipping in. Chilwell and James are providing a constant threat in the full-back positions, with the likes of Mateo Kovacic and Mount able to get forward thanks to N’Golo Kante now playing his favoured deep-lying role.

N’Golo Kante made more tackles (4) and more interceptions (3) than any other Chelsea player on the pitch against Newcastle.

One part of the team that could be rotated are the forward positions, with Lampard able to call on a wealth of talent. Due to summer arrivals, Abraham would have been forgiven for thinking he would be spending most of the season warming the bench. However, his performance at St James Park, coupled with his link-up play with Werner, will be giving Lampard food for thought as he looks to welcome back the likes of Christian Pulisic and Kai Havertz in the coming weeks.

23 – Since the start of last season, Tammy Abraham has scored 23 goals in all competitions, 11 more than any other Chelsea player. Slotted. pic.twitter.com/Hv5zNGYvBD

Callum Hudson-Odoi, who came on in the second half against Newcastle, insisted earlier in the week that Chelsea can win the Premier League title. He said: “We’ve started really well and we want to maintain that. What we’re doing well is defensively we’re keeping clean sheets and up front we’re scoring a lot of goals, which is a good thing. We’re not just dependent on our attackers; we’re dependent on everyone in the team and we’re getting goals from everywhere on the pitch. We want to keep building, keep getting goals, keep getting assists and keep working hard as a team and hopefully, you never know, we could win the title as well.”

Lampard quickly moved to pour cold water on those expectations, he responded to Hudson-Odoi’s comments: “I get it. I like confidence, I like the players feeling like that. For me, it is my job to dampen what he said there and say that we know there is a long way to go, we are eight games in. We are in a decent position, recently we are playing well, but there are so many things that we have to work on and improve on before we can start getting involved in that conversation. That’s up to us.”

There is no denying it now, though, Chelsea are in a title race. Injuries to key Liverpool players, Manchester City’s mixed start and the Blues’ summer of spending has made sure of that. They may eventually fall short but they have given themselves all the tools needed to win their first title since 2017 and make Frank Lampard the first English manager to lift the Premier League trophy.