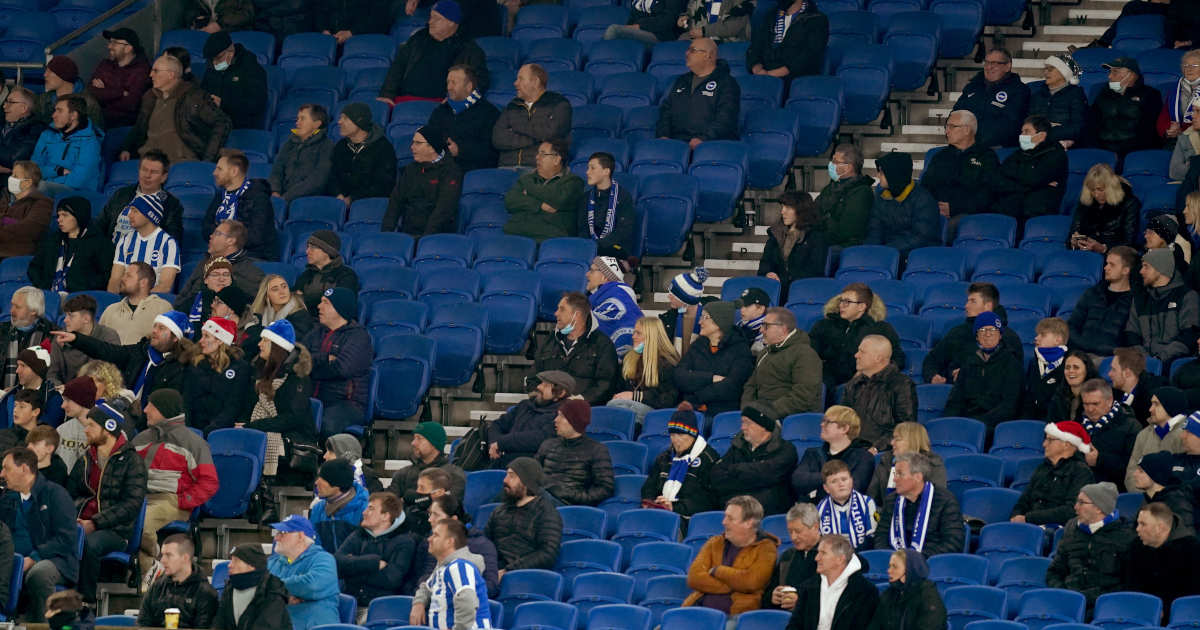 Brighton and West Ham’s Boxing Day matches saw many empty seats – this is a failure on the part of the Premier League’s match scheduling.

There is no other date in the annual calendar which is as significant to football in this country as Boxing Day. Eleven years before it even became a public holiday in 1871, on December 26, 1860, Sheffield FC played Hallam FC in what is now understood to be the world’s oldest local derby. In the inaugural season of the Football League, two matches were scheduled for Boxing Day, and the Football League continued to organise double-headers of matches on Christmas Day and Boxing Day until the early 1960s.

Those watching the Premier League games being played in this spot in 2021 might have been forgiven wondering whether this date continues to have significance to match-going supporters. There were empty seats dotted all over, in particular at West Ham United and Brighton, and the reasons behind this tell a story about the present relationship between the sport and its fans.

There is a semantic debate to be had over whether December 26, 2021 counted as ‘Boxing Day’ in a literal sense, but it seems that clubs were hit by a perfect storm on this particular occasion. There were few trains running anywhere, and bus services ranged from severely limited to non-existent as a result of a combination of the holiday season and a lack of available staff. On top of that, the new wave of the pandemic will likely have impacted upon the number of people looking to attend matches, whether through self-isolation or because they didn’t want to risk contracting the virus by attending.

This problem was particularly acute for West Ham and Brighton. Like many of London’s other big clubs, a large proportion of the West Ham fanbase lives a long distance from Stratford, and a lack of public transport from outside the capital had an obvious effect on the crowd. At Brighton, if anything, that problem was even worse. The Amex Community Stadium is four miles from the centre of the town in Falmer, and Brighton supporters are more dependent than most on the trains to be able to get to matches.

When Southern rail staff went on strike in 2016, the club estimated that up to 12,000 people travelled to each home match by train. To be able to fulfil that with replacement buses would be a tall order at the best of times; to do so on a Sunday, the day after Christmas, and considering the effects of the latest wave of the pandemic, turned out to be impossible. A herculean effort from Brentford managed to get around 2,000 of their supporters to the ground by bus for this match, but estimates of the actual attendance in total were low.

There were, at least, a couple of silver linings for Brighton supporters. Their team put in an accomplished performance and beat Brentford with a little to spare, and supporters who were able to attend at least reported back that their journeys had been fairly straightforward, as we might expect with the number of people actually attending being vastly depressed. But even so, it should leave a sour taste in the mouth that it was so difficult for thousands of supporters to get to a match for which, as season-ticket holders, they’d already paid.

Of course, supporters have been complaining about kick-off times for as long as fixture schedules have been tampered with for the benefits of live television. The banks of empty seats at these holiday matches weren’t a strong look for the Premier League, but they’re entirely the fault of that scheduling. The league’s decision to schedule in a round of midweek fixtures on top of Bank Holiday matches seems to have been done solely for the benefit of broadcasters.

There could be no flexibility surrounding the games being played on December 26 because of these midweek fixtures, which – at least those which survive the pandemic – are all due to be shown live on Amazon. For many, those empty seats were confirmation that the relationship between Premier League football and its broadcasters treats match-going supporters at best as an afterthought, and more routinely as something of an inconvenience. Reported Premier League attendances have long been something of a standing joke because they report the number of tickets sold rather than the number of backsides on seats inside grounds. Brighton eventually announced a crowd number for the Brentford match of 30,141, but estimates from people who were there indicate that The Amex was less than half-full.

There is something particularly poignant about seeing so many empty seats on this particular date, as well. Boxing Day has a special place in the hearts of supporters, many of whom may have been cooped up indoors for the previous couple of days. There is often a feeling of release at these festive fixtures, of a celebration which extends beyond football itself. Matches on this of all days being played out to banks of empty seats should be considered an affront to the spirit of the game in this country.

Of course, with these being The Banter Years, there will be many who found these empty seats to be a source of amusement rather than something that anyone should be angry about, but the gulf between the Very Online football fan and the match-going fan has been growing for some considerable time. This issue should be something that unites rather than divides supporters, since they end up affecting all clubs, to some degree or other, whether through spiralling ticket prices or scheduling which completely ignores whether people will even be able to attend.

The Premier League is very keen on trumpeting how huge its attendances are for matches, so it follows that the league itself should be criticised when its scheduling results in the scenes that we all witnessed for these matches. This was yet another failure on the part of the Premier League to safeguard the interests of match-going fans over those of broadcasters. No-one denies that television money is critical to the Premier League, but there has to be some degree of balance, and when thousands of season ticket holders can’t attend matches, surely that balance has swung too far in favour of big money, and too far from the supporters themselves.

This piece was updated to confirm a reported attendance for the Brighton vs Brentford match of 30,141, which had not been made public at the time that it was published.