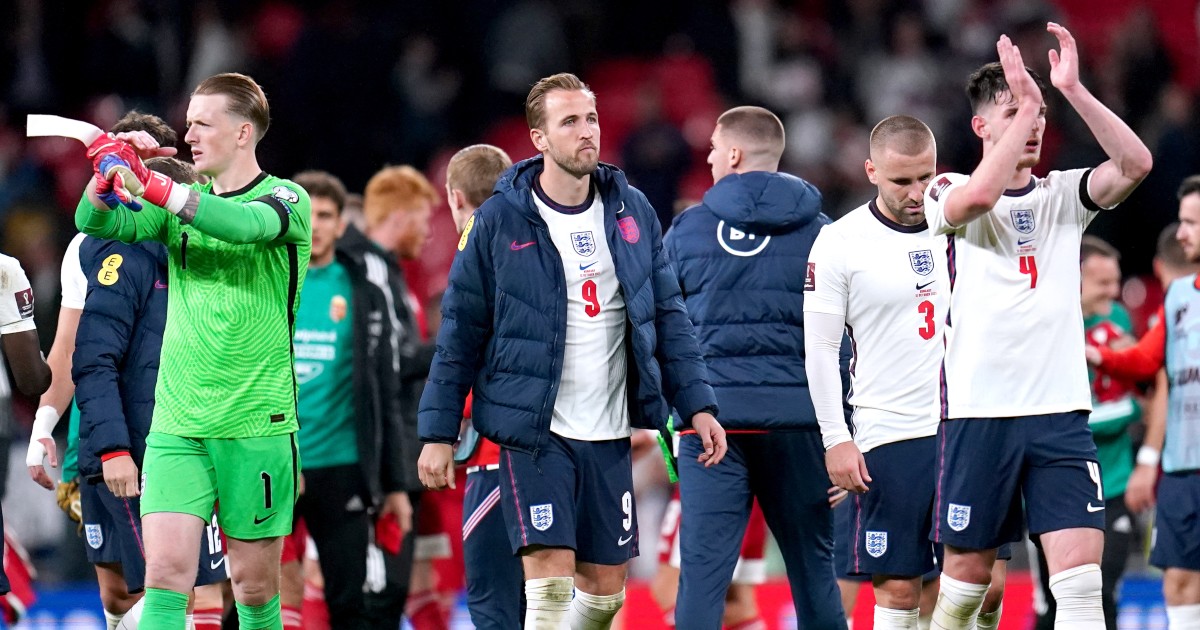 England were pretty poor in a 1-1 World Cup qualifying draw with Hungary. Quite how Jack Grealish was the first to be subbed is a mystery.

JORDAN PICKFORD
Could not do any of his three favourite things: save penalties, distribute the ball well or rave. Collected an indeterminate number of crosses. Might have been one. Perhaps the single most 6/10 performance in history.

KYLE WALKER
He is a very fast man. He also really struggles to play accurate passes or stay in position alarmingly often. If the argument is that he offers the most tactical variation in this system as a right-back that converts into a third centre-back, the counter-argument is that this system was really quite bad and failed to get the best out of literally any player except for one of the actual centre-halves from set-pieces. He took more away from this team than he added to it.

JOHN STONES
England’s most potent goal threat. It was a pretty nifty finish for the equaliser and Stones almost added a second with a header from a corner on the hour mark. His defensive focus was promising, covering well when his right-back went on what can only be described as Walkerbout, while milking the fan appreciation with an unnecessary but lovely sliding clearance soon after his goal. He was also quite good on the ball but that only needs pointing out in 2021 if you are trying to pad out the word count.

TYRONE MINGS
He was fine. He is there primarily to keep the ball away from the goal and he largely achieved that, not least with that absolutely mammoth header in the 7th minute. Shame the broadcast signal didn’t cut out at literally any point thereafter.

LUKE SHAW
A strange one as he was absolutely central (or left-sided) to most of the better England attacks, mixing brilliantly with Grealish and Mount while playing Kane and Sterling in with low and high crosses respectively. Then came the inexplicable decision to Ralph Macchio a simple clearance and provide Nego with an opportunity to win Hungary a penalty. It was the ultimate punishment for a brief bout of daftness, a moment that dampened one of the better individual displays.

DECLAN RICE
Helped win the ball back for the point-clinching free-kick, put in some good early interceptions, misplaced one of 65 passes, struggled to cope defensively in a midfield that completely misrepresented his strengths and was so flustered that he pretended England dominated the game in his post-match interview. But did also get an assist with his back. Swings and roundabouts, both of which would have helped him control midfield more.

PHIL FODEN
Enjoyed himself enough against Andorra to sustain him through the rest of the international break. Foden’s set-piece delivery was excellent, serving Stones with two excellent chances, but his open-play influence was understandably restricted against a far better and more organised defence. There were hints of that deeper-lying impact, especially when finding Sterling in the box at the start of the second half, and the defensive aspect of his game was good. The best bit was his rapid spin on the ball when surrounded by a handful of defenders in the 17th minute as he turned away from the corner and maintained his balance. Otherwise, this was quite the comedown.

MASON MOUNT
Captured the essence of a wholly disconnected team performance with a pass to absolutely no-one in the 15th minute when trying to switch the play. Those typical cute touches helped put together some decent moves on the left and he was England’s best player defensively, completing twice as many tackles and more interceptions than any teammate.

RAHEEM STERLING
Just lacking that bit of attacking sharpness, emphasised by the one-on-one miss in the 70th minute. Sterling on form would have tapped that past Gulacsi and won a penalty or scored but instead he just hit it straight at the onrushing keeper’s legs. The Manchester City forward did win the ball himself to set up that chance, having also done so to play in Grealish towards the end of the first half. Both instances were a notable improvement on that period just after the Hungary goal in which he just stopped pressing and they bypassed him quite easily. One lovely dribble took two players out on the hour mark but that was the bright spark in another dim performance.

HARRY KANE
A rotten first half was summed up in the opening five minutes, in which his touch let him down almost as much as his agent. The sort of chance he would usually bury came soon after but a Hungary defender quite excellently diverted Shaw’s cross away from the back post. Kane made a specific point of not dropping back and hanging on the shoulder of the defence and it unsurprisingly took quite a lot away from his game. The quick interplay of those agile, skilful attacking midfielders behind made him look positively leaden-footed at times. Was a bit more mobile after the break, drifting off to the left and dropping back a few times, but still seemed generally out of place, bar that one fine through ball that put Sterling through. That late spooned miss when he was offside anyway summed it up neatly, particularly considering he was taken off straight after.

JACK GREALISH
If Chicken Artist ever becomes a viable full-time profession then Grealish will never be short of work because that boy can draw a foul. He won the free-kick for the equaliser on one of the many occasions he relocated the ball to the right, the only negative to which was he could no longer combine with Shaw and Mount on the other side. Some of his first touches were exquisite, including a return flick to complete a one-two with the advancing Shaw, and the control from a cross-field ball to break into the box and force a late first-half corner. It was one of those games in which Hungary’s more physical approach meant he sometimes tried to do too much to embarrass them individually, such as when he put one defender on the floor but tried to take it around him again instead of shooting; he was subsequently tackled. Grealish was sloppy at times but that is the trade-off for his unique excellence and he was unfortunate to be the first player substituted.

BUKAYO SAKA (on for Grealish, 62)
Slotted seamlessly into a disappointing team performance by giving the ball away for Holender’s late chance.

JORDAN HENDERSON (on for Sterling, 76)
Brought on to provide more stability. Recorded the second-lowest passing accuracy of any England player (71.4%), spared only by…

OLLIE WATKINS (on for Abraham, 92)
Had two minutes in unexpected circumstances and still came closest of any England striker to scoring. Should perhaps have done better but he did slip. Watkins’ only touch was a shot and Shaw was the only player to manage more fouls.