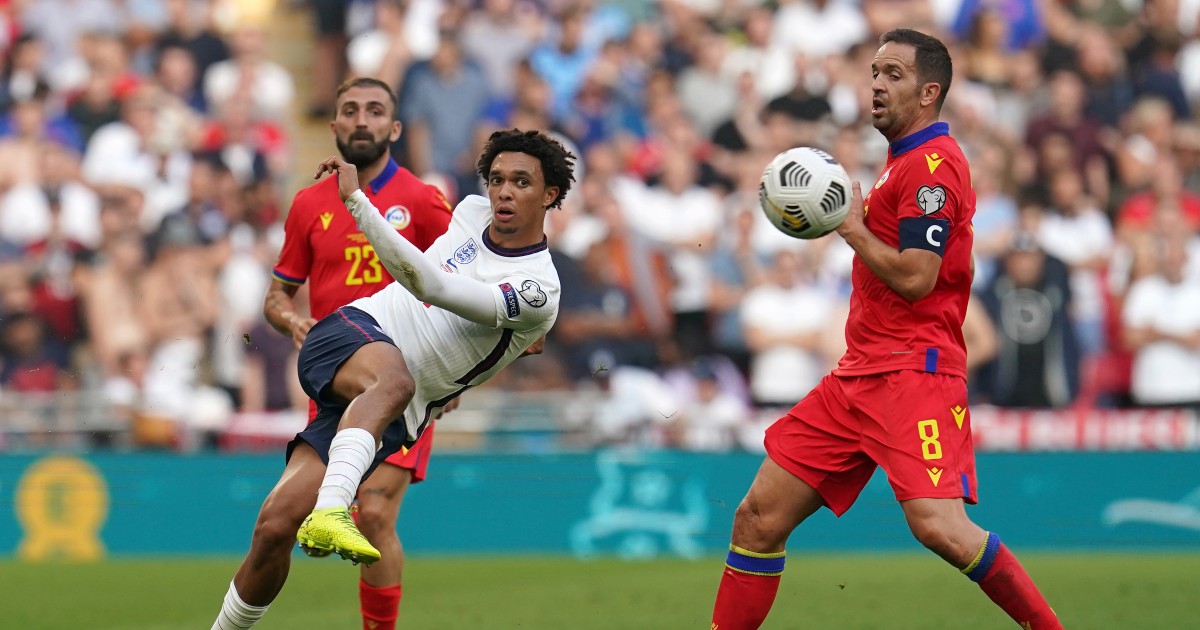 SAM JOHNSTONE
No-one can say he failed to earn his second England clean sheet in as many caps. That Marc Vales shot from the Andorra half quite literally needed saving. Johnstone also ventured out of his area on a few occasions to mop up masterfully and save Mings and Coady’s legs. The bloke must be pretty religious because Sunday sure was his day of rest.

REECE JAMES
Without being particularly desperate to kick a club while it’s down, it was funny to see Reece James being put under greater pressure by and looking far more vulnerable against Andorra than he did facing Arsenal in his penultimate club outing. He made a few mistakes at right-back as the energetic Aaron Sanchez sought to prey on any complacency, but James always managed to wrestle control back eventually. Took his frustrations out on the crossbar during a lovely 15-minute jaunt in central midfield. The boy can shoot.

CONOR COADY
Tried an overhead kick in an attempt to live up to his reputation as semi-prolific international goalscorer. Panicked a little and handed Alexander-Arnold a hospital ball when running back towards his own goal at the start of the second half but was otherwise as unruffled as one might hope.

TYRONE MINGS
That halfway line Cruyff turn was the second most effective piece of evasion Mings has executed this summer, behind only that time he mugged off Priti Patel. The Aston Villa centre-half had a quiet evening, mainly spent jumping pretty high and stepping up aggressively out of defence to maintain control. One such instance led to England’s opener after his perceptive interception.

KIERAN TRIPPIER
It was great to see him and that but the set-pieces were substandard and Trippier at left-back against Andorra seems a bit much. Bamford was a particular victim of the defender’s tendency to work himself into a good position but have to cut back and narrow the play because he did not trust his left foot. It is worth keeping him as an option for this role in games against better teams with more attacking proclivity, but this match? That one right there? No.

JORDAN HENDERSON
Not sure anyone enjoyed themselves more. Henderson absolutely revelled in the opportunity to play like he was on one constant highlight reel, clipping long balls over the top, trying reverse passes that his teammates were too slow to read and generally strolling around the pitch with all the insouciance that a 31-year-old born in Sunderland can possibly possess. 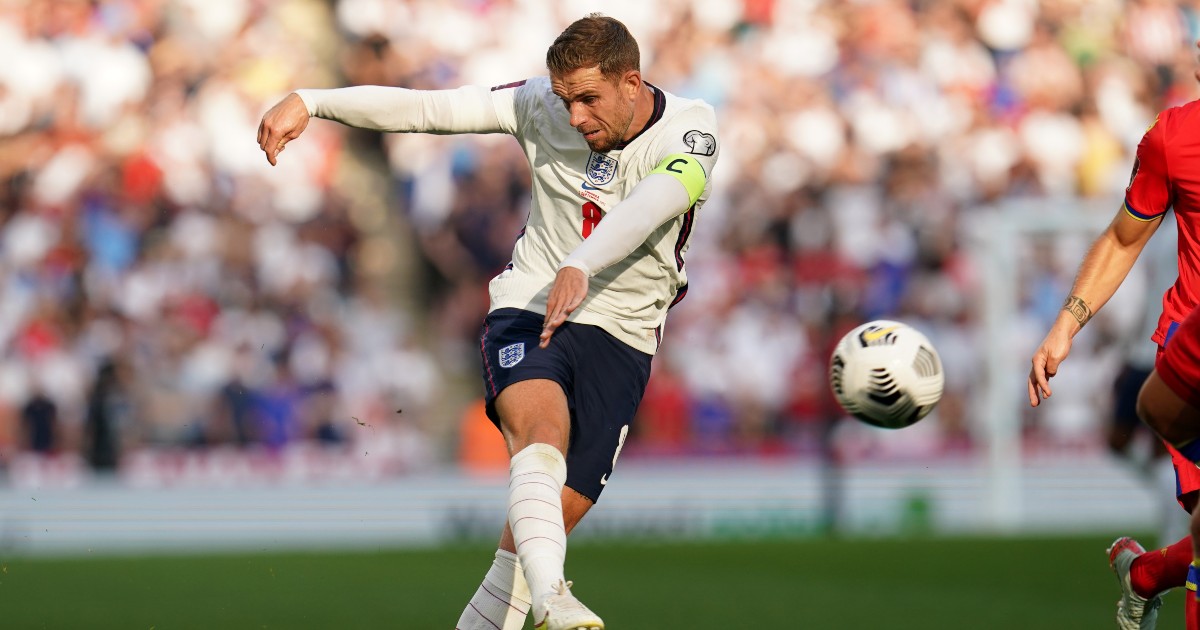 TRENT ALEXANDER-ARNOLD
Those last five minutes salvaged a pretty mixed performance. The greatest quick corner Alexander-Arnold has ever taken led to the fourth goal and some lovely skill almost played Lingard in for a hat-trick soon after. He notably improved after being shuffled back into a more familiar position at right-back – save for when he compounded Coady’s poor pass with a wild hack that Henderson had to clean up. But this should put an end to the cries for him to play in midfield: he looked uncomfortable and inhibited, even having one of his trademark half-volley passes blocked and skying a first-half free-kick from a glorious spot. Full-backs generally exert more influence in the modern game so trying Alexander-Arnold in a nominally more forward position was always something of a misnomer. There was some delightful movement off the ball, it should be said, just without those flashes of technical brilliance.

JUDE BELLINGHAM
A real delight to watch. The way he glides and always looks for a progressive pass is lovely. His close control is exceptional, eliciting joyous cheers from the crowd early on with sumptuous skill, before a clever drag-back and quick pass in the build-up to the opener. Some more wonderful touches and ingenuity followed thereafter before his removal on the hour. Being ultra critical, it was an error to shoot near post when he plucked Alexander-Arnold’s crossfield ball out of the air and cut inside, while a pass to the unmarked Lingard was behind him when it needed to be in front and into the open space. They are slightly better than the mistakes us mere mortals make at 18, and infinitely less soul-destroying. Can’t wait to see which Premier League club ruins him.

JESSE LINGARD
The propensity to infuriate people through no fault of his own is impressive. The sight of a 28-year-old man thoroughly enjoying his work grates with many, as does the fact he remains crucial to Southgate’s England despite seemingly being stuck on the Manchester United bench. But Lingard has never let his country down and was not about to start on Sunday. He took his two goals excellently, combined well with Bamford and even paid tribute to Dele Alli by trying to recreate that goal against Crystal Palace in 2016. That wedge over the Andorra keeper when put through in the 21st minute was so sublime that the officials should have considered ignoring the whole offside thing, while the slight delay and disguise for the pass to Saka in the lead up to his and England’s first goal was great. Gave Grealish something to enjoy from the bench by being fouled about 427 times. Should probably get used to his national team presence for another couple of years.

BUKAYO SAKA
A performance underpinned by slight imperfections: the open goal missed thanks to a slight deflection off the Andorra defender; the cross to Bamford that was headed straight to Lingard who finished well; the lovely dink to Bamford that was just beyond the striker; the clever low ball to find Bamford’s near-post run that was defended excellently; the inability to hold his run and then to beat the keeper before being ruled offside. But the appeal with Saka is that he never relents and constantly tries something different. Few players combine incisive passing with explosive dribbling and unpredictability quite so well. A goal and an assist is a fine return.

PATRICK BAMFORD
Not quite on the same wavelength as his new teammates. The movement and the runs were there but so often the pass was either too late or lacking completely. He is the most stylistically similar striker to Kane that England have and there were signs of that: dropping deep to collaborate with Lingard in the 10th minute, then delaying his pass slightly too long to the same player for that glorious disallowed goal. A couple of great knockdowns for Coady and Lingard showed his ability to change things up and go more direct but the lack of adequate service was so frustrating that he snatched at his only real chance in the second half when a loose ball fell to him.

MASON MOUNT (on for Bellingham, 62)
Seemed remarkably reluctant to shoot as the ball was trapped under his feet after a lovely exchange with Grealish, but was wise enough to adjust and move his body in front of the defender to ensure a penalty would be won.

JACK GREALISH (on for James, 62)
Lovely interchange with Mount for the penalty. A bright run and decent cross for the offside chance that Kane crashed against the post. Is a very popular boy.

HARRY KANE (on for Bamford, 62)
Padded those stats like a true pro.