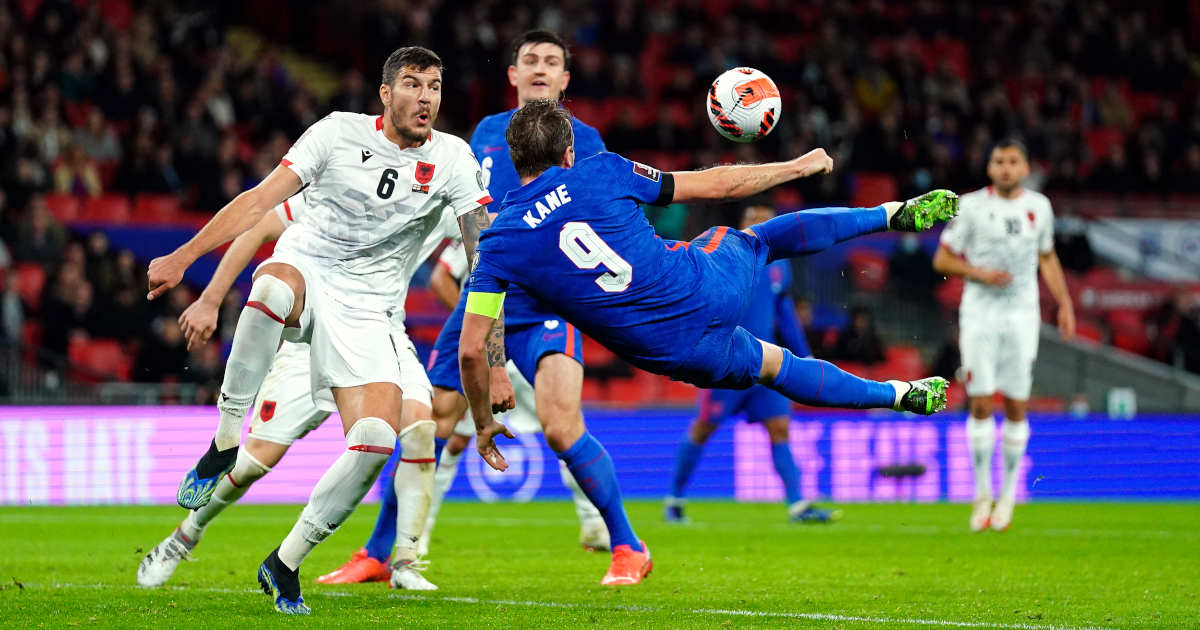 Harry Kane scored a perfect hat-trick in a game of one half at Wembley which almost guarantees England World Cup qualification.

JORDAN PICKFORD
There is, of course, more than one Jordan Pickford and one of the giddier thrills of watching an England match is wondering whether it’ll be the one who can save the winning penalty in a shootout, or the one who at times appears capable of accidentally tying his bootlaces together in the changing rooms before a match. On this occasion, there wasn’t much of a chance to find out, since Albania were absolutely abysmal. He was called upon seriously once, when Uzuni burst through on goal after a quarter of an hour, and he parried the shot. Otherwise, a quiet night and another clean sheet. Job done.

KYLE WALKER
On a night when the England defence could have been replaced with scarecrows, it is somewhat unfortunate for Kyle Walker that his only significant contribution was the half-baked backpass that let Uzuni in for Pickford’s save. Otherwise a quiet night.

HARRY MAGUIRE
If ever there was a player who was playing as though the weight of the world was lifted from his shoulders. Harry Maguire opened the scoring with a thumping head from close range after just nine minutes. Cynics might argue that this could be an example of the difference between the top end of the Premier League and a World Cup qualifier, but Maguire’s performance was assured and confident, everything he’s been lacking recently in the red shirt of Manchester United.

JOHN STONES
There were points during this match when you half-expected to look across the Wembley pitch and see that John Stones had lit himself a little bonfire and was toasting a marshmallow. The centre of the England defence was a restful place to be, but Stones didn’t put a foot wrong.

REECE JAMES
Reece James is rapidly developing into one of the best full-backs in the Premier League. James really stamped his authority on the match with a delightful cross for the opening goal, and was involved all over the pitch. Gareth Southgate’s team selection before the match was criticised by some as defensive, but critics seemed to be mistaking a 3-4-3 for a 5-3-2, and James’ assertive, focused style really suits that system.

JORDAN HENDERSON
With Declan Rice missing, this was an opportunity for Jordan Henderson to make a statement, and he certainly did that, with a lovely cross for the second goal, dropping the ball onto Kane’s head in such a position that it would have been almost impossible to miss, and a well-taken third goal after a mazy run from the midfield and a tidy one-two with Harry Kane. It was only the second goal he’s scored for his country, which seems all the more absurd when you consider the quality of that one.

KALVIN PHILLIPS
Playing alongside Jordan Henderson in midfield on a night when Henderson is playing in the way that he did in this match was always going to result in Phillips being put in the shade. But Phillips did his own job perfectly capably, biting in the tackle, although some of his passing left a little bit to be desired. Taken off as the third leg of the treble substitution that came just after the hour.

BEN CHILWELL
If Ben Chilwell plays in a football match and I didn’t note down a single thing he did, did he play in the match at all? I’m being facetious, here. Ben Chilwell was fine. He was neither good nor bad, neither strong nor weak. He didn’t do anything incredible, but he didn’t make any huge mistakes. It’s the same problem that Kalvin Phillips has playing alongside Jordan Henderson. Ben Chilwell plays opposite Reece James, and was in the team as a sreplacement for Luke Shaw. He needed to impress in this match and he didn’t quite get there.

PHIL FODEN
Foden provided one nice through-ball for a Harry Kane chance and he is a player who oozes class every time he touches the ball, but this was a very quiet night for the Manchester City player and he never really got into the rhythm of the game. Subsituted as part of a triple substitution just after an hour had been played.

HARRY KANE
This was the sort of first half that Harry Kane has in his fever dreams. His first was an easy header aafter a superb cross by Jordan Henderson, and his second, scored with his left foot, was made easy again by the through-ball from the same player. Following further good chances, he completed a perfect hat-trick right on half-time, with a right foot overhead kick from close range. He continued to cause problems until he was withdrawn after 63 minutes. It is possible that England are a little less dysfunctional behind the scenes than Spurs have been this last few months, but what was notable was the way that Kane hooked up with both Jordan Henderson and Raheem Sterling. This was the best performance he’s put in for a very long time.

RAHEEM STERLING
Sterling had a quiet first 20 minutes, but one nice little run into the penalty area seemed to perk him up and he could have had a penalty later in the first half when he seemed to be tripped after a mazy run acoss the penalty area. Sterling grew into the first half, linking up superbly with Kane, and both of their displays. Curiously, club form was not an issue for either of them. Replaced by Emile Smith-Rowe with 13 minutes to play, but more to give the youngster a run out than on account of anything Sterling had done.

JACK GREALISH
Had one quarter of a chance flick off an Albanian defender’s ankle, but at that moment he probably should have passed. Didn’t really add much to the proceedings, though the first-half goal rush had strangled the life out of the game by this point.

TAMMY ABRAHAM
A quiet half-hour in attack, coming on just as England switched to a more conservative way of playing to run down the last 30 minutes. Featured in attacking positions only a couple of times.

JUDE BELLINGHAM
Had one moment, when a flick inside to Reece James almost set up a sixth goal, but otherwise Bellingham was another to suffer from the game’s drop in tempo.

EMILE SMITH-ROWE
The effervescence of Emile Smith-Rowe’s recent Arsenal performances carried over in an England shirt, with 13 minutes that finally raised the heat inside Wembley after everything had started to run a little bit cold. He almost broke through with his first touch of the match, and his appearance was a reminder of the embarrassment of riches that England have in terms of young players.

TRENT ALEXANDER-ARNOLD
Seemed to be struggling to get into attacking positions, but did have one late shot on goal blocked. It should also be added that 13 minutes isn’t very long to prove yourself.