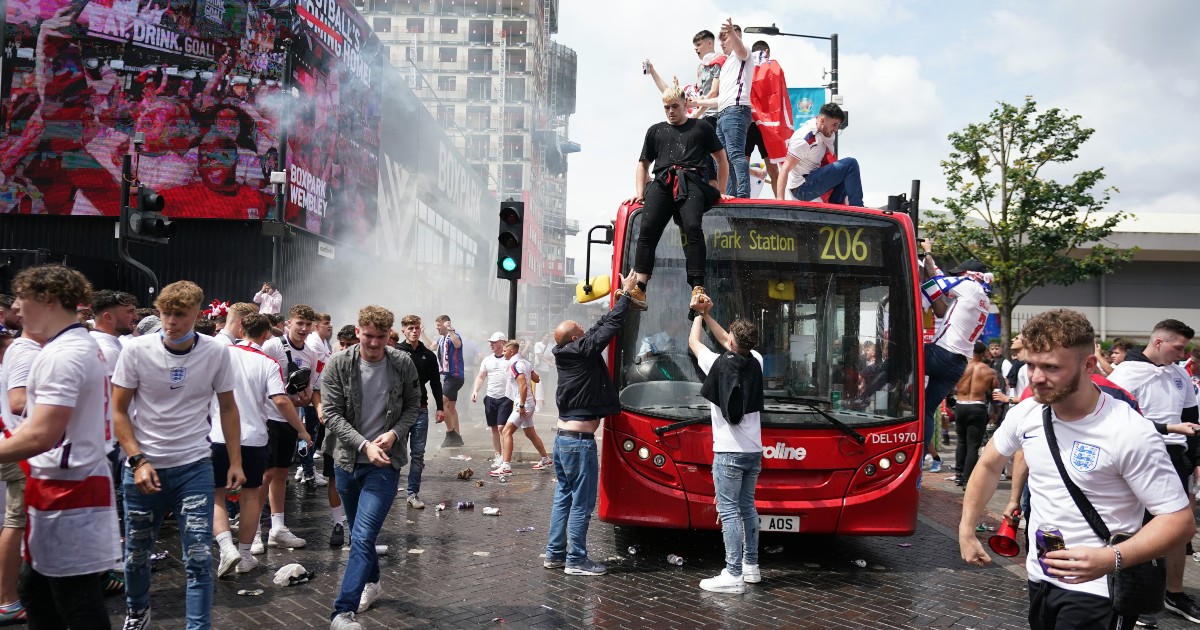 The memory of England in a first final in 55 years was tarnished by people too selfish to see they might have stopped the chance coming home again.

We were a Marcus Rashford kick away from glory. That is what history will eventually tell us about Euro 2020. ‘It was the summer that football nearly came home,’ the narrator of this great story of magic and joy and then familiarity and pain will sigh.

Of course, that isn’t remotely true. Rashford did not have the decisive kick. The 23-year-old had just come onto the pitch specifically to take a penalty in the shoot-out against Italy but his moment was to be one of consolidation, not celebration. Had he placed his shot an inch further in from the post, England would have built on Jordan Pickford’s good work in denying Andrea Belotti, but there would still have been work to do to actually turn those dreams into a reality.

English football has a desperate and unhealthy need to pinpoint where things go right and wrong and to rewrite history. Rashford’s miss turned the tide, not only squandering the momentum but handing it on a plate to the Azzurri who grappled it tightly and didn’t let go. As this story is told and retold in the years to come, immortalised in the style of Italia ’90 and Euro ’96, the Rashford moment will become isolated as the point when everything changed. Even those who peddle that narrative will not be blaming him, but it is so easy to focus on what could have happened had he scored that it becomes what would have happened.

Pandemonium. History. Lots and lots of drunken marauding at 3am. It was all waiting; greatness was waiting but it wasn’t to be. Pickford even saved again from Jorginho but Jadon Sancho and Bukayo Saka both saw their kicks blocked by Gianluigi Donnarumma.

What actually happened next and even long before it has painted a very different picture of England the country, not the team, and even condemned it.

The place to start is at the end, when Rashford, Sancho and Saka proved themselves and their teammates correct. After a month of taking the knee in a bid to show support for the fight against racism and being booed for it by sections of their own fans, at the end of it all they showed exactly why it was so necessary.

They knew it was coming and that is the saddest thing. All three were subjected to vile abuse on social media after the game. In that moment, an illusion was shattered: the country had come together to support the team, driven on by the effort and energy Gareth Southgate and his players exuded, but for some the goodwill was only valid until the black players ‘let them down’. Then it was back to accusing and attacking them. While they all stood in peace and made their point before games, their actions were met by a sea of condemnation and derision, even from high-ranking government officials who then attempted to backtrack with faux shock when the chickens came home to roost.

Rashford became central again. The nauseating bandwagon of political commentators who had criticised and shown no interest in the team before they sensed a chance to claim their slice of the glory, spotted another opportunity. Within minutes of the game being lost they were gleefully point-scoring with their ‘stick to football’ rhetoric with reference to the forward’s one-man mission to feed the hungry children of Great Britain. His mural, unveiled as a direct response to such brilliant humanitarian action, was then defaced with racist paraphernalia. Once again, people rallied. The graffiti was covered up by more heartwarming messages of support, the kind that have met both Sancho and Saka in the aftermath.

But the cold, harsh reality is England cannot live in denial anymore. Not for the first time, when the world was watching, the worst of it shone through.

Wembley was hosting a major final and England were in it. It was the stuff of dreams and legend. This was a generation’s 1966, modernised by the pre-game hype and wave of excitement which brought everything to a standstill, neither having been present 55 years ago. But for thousands it was ruined; the trauma of seeing Wembley breached by people without tickets, of streets destroyed, of innocent fans and citizens caught up in a blaze of madness as the law and common sense were set aside, was more powerful than any good result could have been.

Football in general has spent years attempting to clean up its act and its image, making itself safe, accessible and accepting for all, but when it mattered most it fell back into old habits. The mood was bitter, scary and a culmination of society’s refusal to punish bad behaviour from the top down empowered a nationalist, war-ready belief system.

Ultimately, it wasn’t Rashford or Sancho or Saka who cost England its greatest night in over 50 years. The hooliganism which has skirted around the edges of the team for years took centre stage.

Amid all the complaints over their route to the final, playing all but one of their games at home in a tournament supposed to be shared across Europe, England still want to host properly again. But despite having infrastructure, facilities and general practicality in their favour, it is this kind of image it parades of itself which will ultimately prove costly. Over time, the story of this summer will be airbrushed and perfected; the heroes will be raised and the key moments scrutinised, each etched into folklore. But if the country wants to learn and grow and show what it truly can be, it must remember the horrors which brought an end to a brilliant ride.