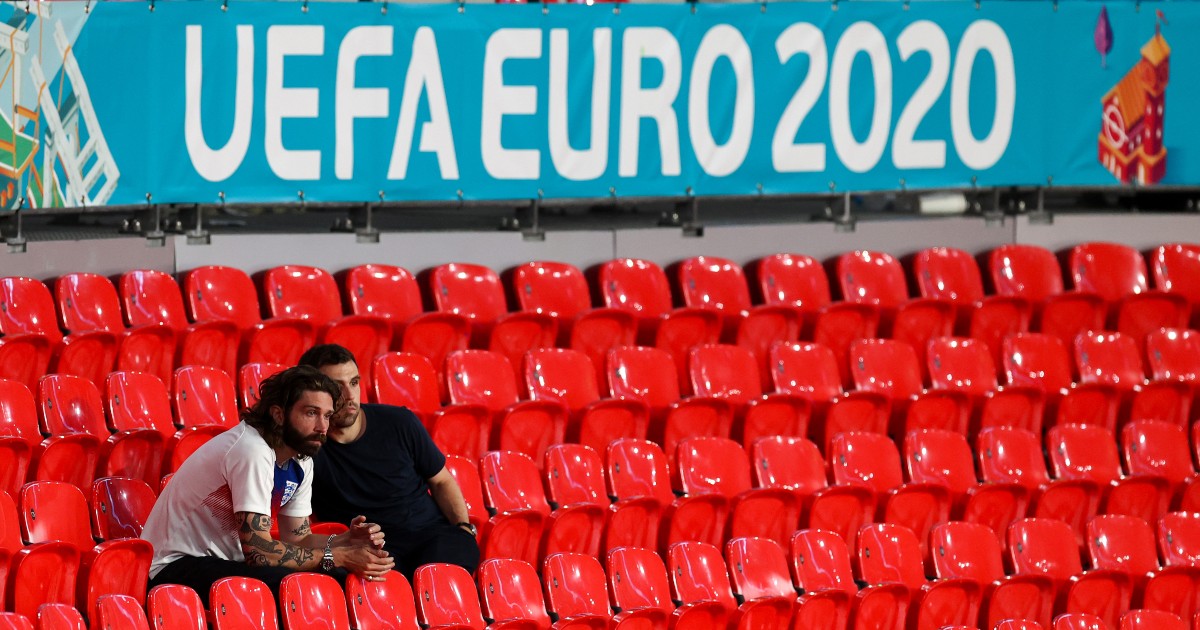 It felt like England failed a test in terms of how to behave around the Euro 2020 final. But the majority actually did themselves proud.

It is easy to despair and last week, I seriously did. But I was wrong to.

After the behaviour around the Wembley final, on top of booing England taking the knee throughout and the post-game racist abuse, I just wanted to put my head in the sand and hide because it all felt overwhelming and depressing. The game I love was overrun with bastards.

This nihilistic despair is, I think, a symptom of the age. But in the end it was the bum flare guy (the BFG) who helped guide me into a proper perspective. An unlikely bodhisattva, I grant you.

Today, nothing is hidden, everyone has seen the BFG via social media. It was almost impossible not to feel that the world had gone insane and English football fans were worse than ever, as the footage poured in.

This absolutely is not true and yet it felt like it was and feeling like it’s true is a stronger emotion than knowing it isn’t. That’s the problem. Our despair increases in direct proportion to our exposure to awful behaviour, not to the actual amount of it. There was only one BFG, after all, but he was inescapable and quickly became emblematic of a wider problem, bound up in the reaction and the reaction to the reaction. Things quickly got out of proportion and the initial crime seemed bigger and more widespread than it was.

The BFG’s language was interesting. Interviewed later in the week, unapologetic, he said it was the “best day of my life” and “there were no rules”. Underneath that is a sense that this was a chance to throw off the shackles, get wide and do whatever came into his head with like-minded people. I’m sure we can all, to a degree, sympathise with that. The need to let off steam is as old as humanity itself and the moral outrage at people doing it, equally so.

Whoso pulleth out this flare of this crack and arse, is rightwise king born of all England pic.twitter.com/j9kxHYv7ZP

It’s also important to remember that not everyone sees this sort of behaviour in the same way. In 1979 in my first week living in Newcastle I witnessed gangs of lads going from pub to pub, sticking their fingers down their throat and vomiting up the last few pints, to make room for more, even before it had hit their bloodstream. It seemed weird and animalistic. There were people f**king in the back alleys off the Bigg Market; there were almost casual fights and others were just passed out in the gutter, being stepped over like so much human litter. It would’ve looked very, very bad on social media.

But this was 42 years ago and I took it all in my stride, in truth, rather excited by finding myself, full of lager and kebab, in the middle of Sodom and Gomorrah. So it’s worth bearing in mind that what can seem like the end of the world to some people can seem more like an entertaining day on the pish to others.

Once we understand this, it helps to put the Euro 2020 experience into its proper context. Yes, we obviously still have problems, but the situation is fluid and changing. We have two diametrically opposed realities butting up against each other. This is the crucible in which the future will be forged. This isn’t to say we should tolerate bad behaviour, more that we shouldn’t think it’s bigger and more omnipresent than it is. The rioting around London and Leicester Square was a failure of policing and organisation as much, if not more than, a failure of morality, which then got conflated with the racism that followed to make one big ball of depressing problems.

And an example of a better future is evident from this new generation of footballers who are socially aware, feel a general sense of responsibility and empathy for those less fortunate and are articulate about it, despite their often young age. This is tremendous and I think mirrors their generation.

This last month has proven the country is not chock-full of Nigel Farages, bigoted-for-money, full of weird World War II fantasies and intolerant of change. A lot of the country was sickened by ministers trying to dance around taking the knee being ‘gesture politics’, knowing they’d been caught on the wrong side of history but, for pathetic party political reasons, were unable to be honest about it.

All those press conferences swathed in union jacks like a B-movie fascist dictator have made people laugh or scoff, not stand and salute.

The horrible racist tweets were awful because they were not the norm, they were an extreme, but they were counterbalanced and then drowned out by the appalled response. 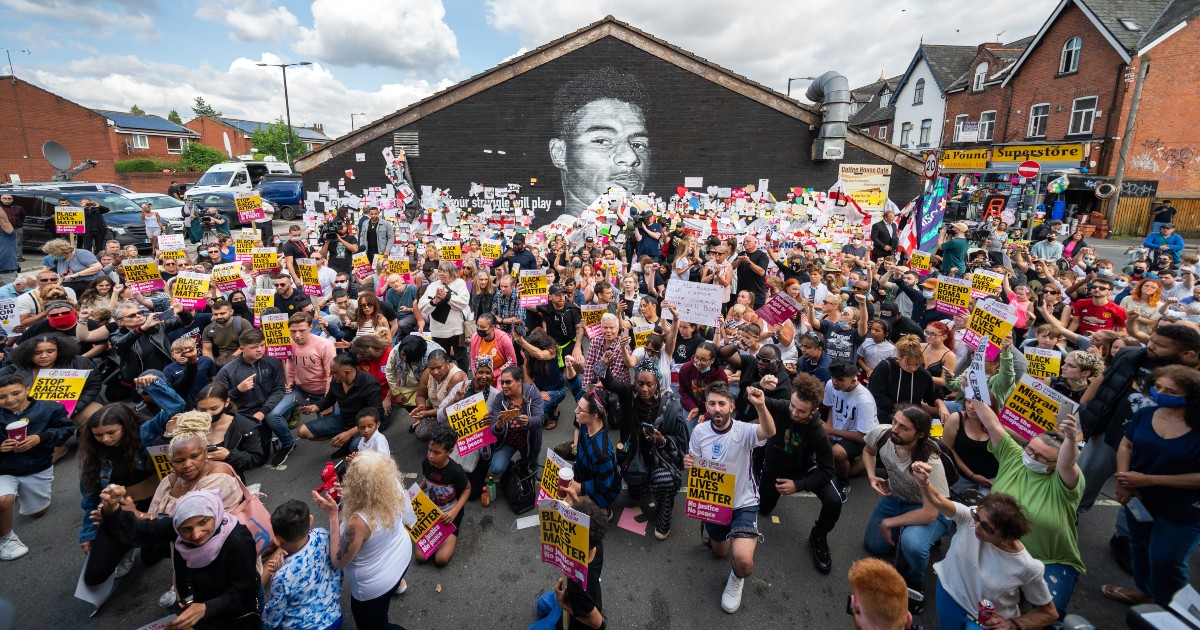 While a small ‘go woke or go broke’ minority is literally obsessed with spotting the woke in their midst, obsessed with the word itself, it seems many, perhaps especially younger people, look at them through narrowed-eyes, like they’re alien lifeforms. This is not the country young people want or will build.

For all the frenzy about social media and its all too evident negative side, diversity is ironically at its core: it is literally for everyone. The appalled response to the racist comments proved just how deep and wide this is now. The weirds have to tell themselves this is all virtue-signalling because if they don’t, they’ve lost. If all these people saying to Marcus et al. that they love them and thank them just for trying to score a penalty, and they really mean it, it paints those critics into a very isolated and mean corner.

Because this was a test for this country. Which side would we back? It was the frontline of old butting up against the new. Regressive v progressive. Booing v clapping. And while we saw a failure to police hooligans properly, we also saw an uprising against the abuse, against the defacing of Marcus Rashford‘s mural, an uprising of affection, respect and love, all saying no to hate. Crushing the hate with love. Beautiful.

As the plummeting viewing figures for Angry Bloke TV, aka GB News prove, it seems there is a much smaller audience for intolerance television in the UK than those who surround themselves with such voices believed. Self-righteous yelling into an existential void, drumming up enemies with faux rage, only has a limited appeal for a limited amount of time. Agreement is harder to monetise than anger.

What Euro 2020 really allowed us all to express in our rejection of the intolerance was not how awful England fans are, not how violent or racist they are, as I had thought, but actually how the vast majority are not and do not accept that this is how things have to be.

Wouldn’t it be lovely to think a kinder, less harsh but newly empowered country was emerging from the ashes of the old, burnt out intolerant extremism and all the booing and abuse and flag-hugging was but the death throes of an old way of being as it dies out? Maybe it really is.

As for the BFG, well, all I’d say is don’t go round his house on bonfire night with a roman candle and a packet of sparklers.